Our next excursion was to Coba, a Mayan settlement shrouded in dense jungle.  Coba is much older than Chichen Itza, dating from  around 50 BC.  The drive there was entirely uneventful.  It was busy around Playa del Carmen but by the time we turned away from the coast and towards the interior there were hardly any other cars on the road.  We noticed wooden platforms lining the side of the road at points.  These were where people put their bin bags, presumably to keep them up above ground level and away from scavenging animals.

Coba was totally different from Chichen Itza.  I could tell that even from the restrooms: I was handed three squares of toilet roll as I entered and there were no seats on the toilets. I was then handed one paper towel after washing my hands.  The facilities were very basic but the entry tickets also cost a fraction of what they did at Chichen Itza.  Also unlike Chichen Itza, there was no clearing around the ruins; the jungle was right on top of everything.  Our excursion became a walk through the jungle that occasionally led us to some ruins.  We really enjoyed it for just that reason.  We encountered frogs, lizards, grackle, a hummingbird, lots of ants, mosquitoes, yellow butterflies, and huge blue butterflies.   It was very humid and steamy. As we walked 4 square kilometres to see ruins scattered all over the place, my Scottish head became a glowing beacon. 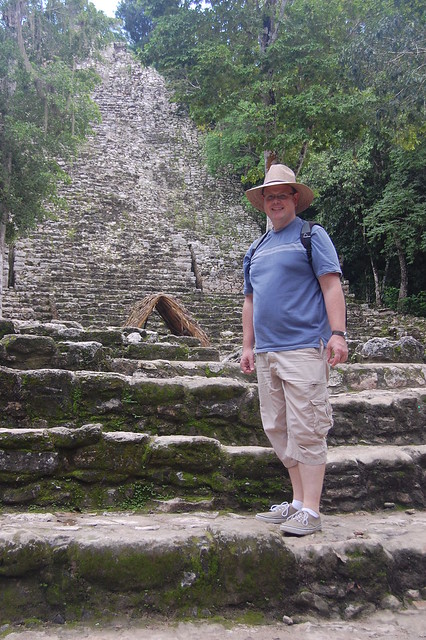 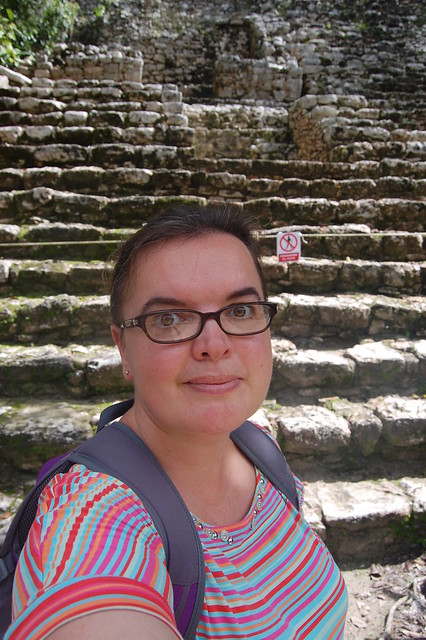 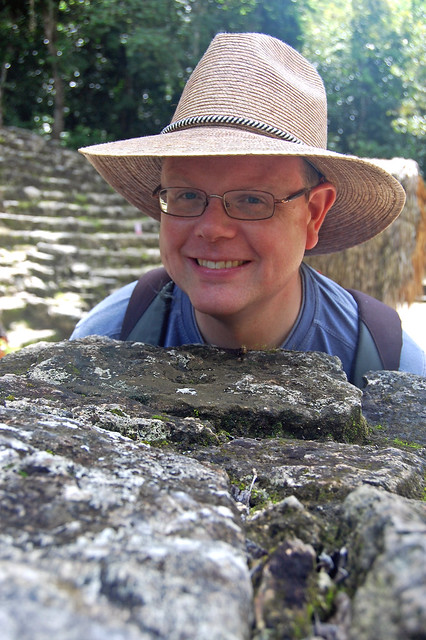 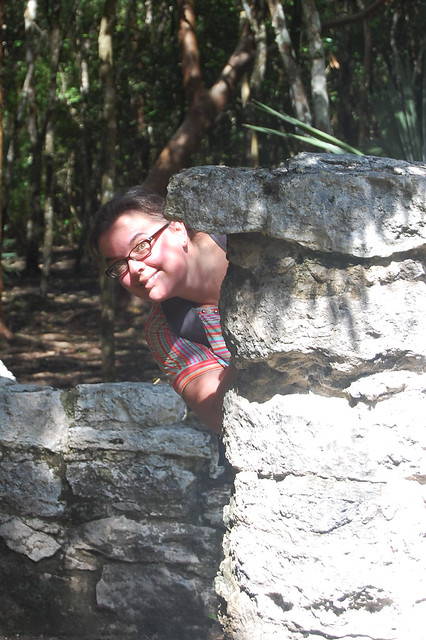 It was evident that Coba was not as protected as Chichen Itza.  We could climb on the ruins up to certain height when they got roped off probably more out of concern for the safety of visitors than for the preservation of the ruins.  Mr Pict was even brave enough to climb the great pyramid.  He found the ascent and descent quite nerve-wracking but decided it was worth it for the fabulous views over the surrounding jungle.  I didn’t want to make a spectacle of myself having a panic attack so I spectated from the “weenie creche” benches below.  There were two ball courts at Coba and they had much lower rings than at Chichen Itza but I still had no idea how players scored goals off their hips. 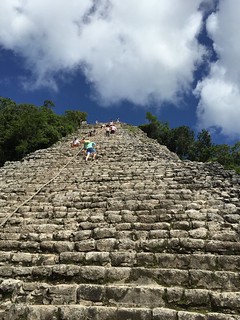 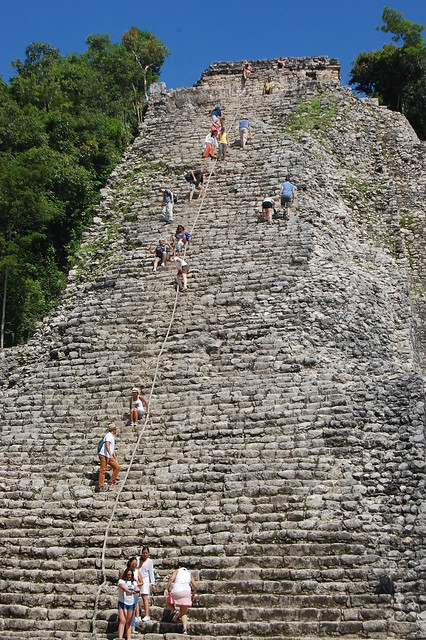 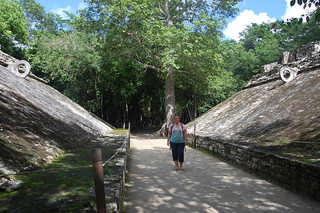 We felt like a pair of hog roasts when we emerged from the jungle so we decided to go back to our hotel and make use of the facilities.   We quickly got into our swimsuits and headed down to the seaside pool. Mr Pict went swimming in the ocean first, diving around in the large waves and strong current, and then we headed into the pool.  The water was a lovely temperature.  I spent most of my time swimming lazy circles on my back, staring at the clouds, birds overhead looking like pterodactyls, watching the sky melt from blue into pink, the early evening sun slipping below the building line, ears underwater to enjoy the quiet.  It was the most peaceful and restful I have felt in a very long time.  I also got to experience my first wet bar as we sipped margaritas as we sat in the water.  That was definitely luxurious and a big birthday treat.  We ended our swimming trip with a dip in the toasty warm jacuzzi as the waves crashed on the shore behind us.
Feeling lazy again and drawn to the thriftiness of a substantial discount, we dined in a hotel restaurant again.  This time it was an Argentinian Steakhouse, not a promising prospect for someone who doesn’t eat red meat.  However, I wound up so stuffed I couldn’t finish my entree which was a wild mushroom risotto.  Mr Pict had a steak that was so perfect he could slice through it like butter.  The waiting staff were so vigilant and on the ball that I ended up feeling super lazy since I never once had to even pour my own water.  I was actually a little uncomfortable with the degree to which I was being waited upon, as if I had servants.  I was definitely being spoiled rotten on my big birthday trip.