On our return journey from Chichen Itza to Cancun, we decided to go via Valladolid.  The drive did not take too long and took us through a few small towns.  We noted that each village had a little police building at each end, almost like a border control – though several of the police officers we passed were looking at their smartphones.  The housing was very basic in that area, the dwellings little more than shacks, the windows having wooden sticks for slats rather than glass.  There were also lots of feral dogs and lots of those peculiar bicycles with the baskets.   We also drove past a prison where a stall outside was selling brightly colored hammocks made by the prisoners. It felt peculiar and not all that comfortable visiting an area with such obvious poverty from a base at a luxury hotel.

I wanted to visit the former convent and current church of  San Bernardino de Siena.  The guide book and Google both indicated that the church would be closed to visitors by the time we reached there so Mr Pict parked up and I got out of the car to walk the perimeter of the building and take photos.  As I wandered, however, I spotted that it was actually open so Mr Pict joined me and we took ourselves on a self-guided tour.

Valladolid was founded as a colonial town in 1543 by the nephew of the famous Conquistador, Francisco de Montejo.  The church was built soon afterwards, in the 1550s making it one of the oldest churches in the Yucatan peninsula, maybe even the oldest.  The exterior facade was unassuming veering towards ugly.  Its surface reminded me of a wall when the tiles have been ripped off but some of the adhesive remains. 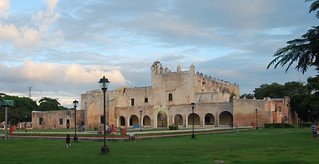 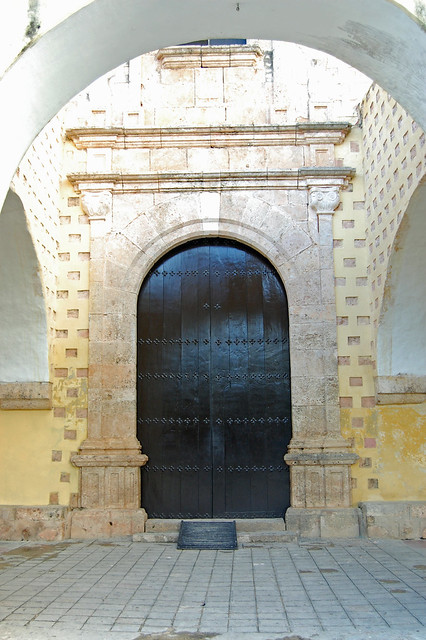 The interior was very simple and worn in places, suggesting that perhaps it has not been updated architecturally much since it first opened its doors.  The cloister’s arches were even covered with moss and algae.  It was a very interesting place because of that, however.  The walls reverberated with its centuries of history. 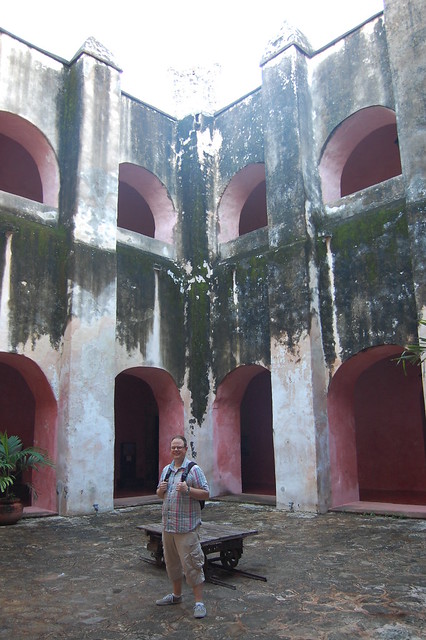 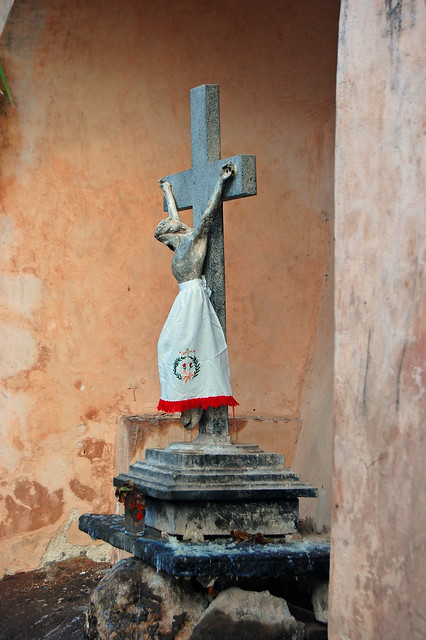 The actual church contained some fascinating ecclesiastical artwork.  There were some sculptures that I found a bit creepy, I must admit, as they looked like dead-eyed dolls.  There was also a Christ who looked like a marionette.  There were some frescoes on either side of the alter, the colours still surprisingly rich against the plaster.  The proportions of the figures gave me a wee bit of a chuckle as the cherubim had skew wiff bum cracks.  Peurile humour, I know.  The most dominant feature of the church, however, was the imposing altarpiece.  Carved out of wood, it contained niches for various biblical figures.  On an artistic level, it was not my taste but I certainly found it interesting to look at.  The upper level of the building was full of corridors leading off into little rooms.  The walls were a lovely shade of candy pink and the elevation gave us great views down into the church below. 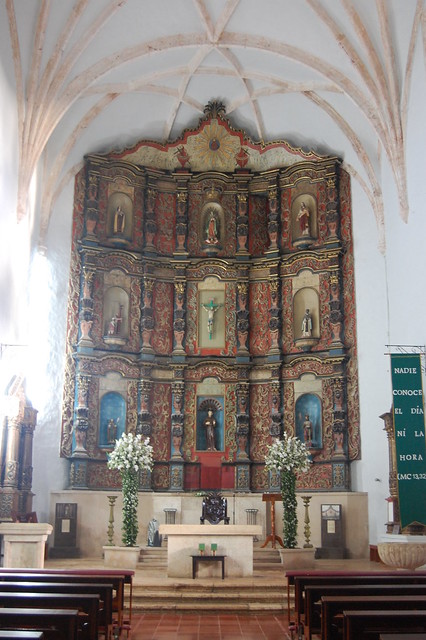 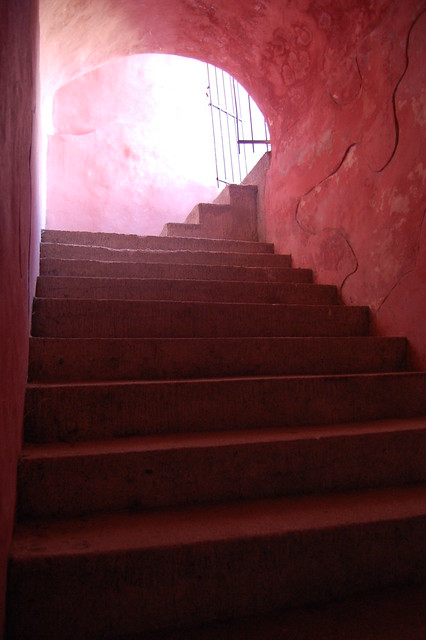 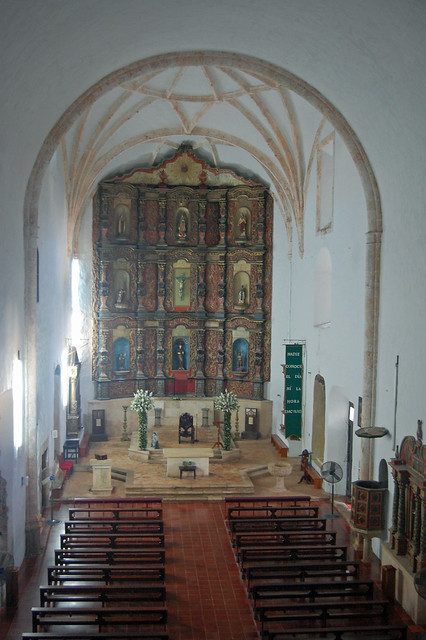 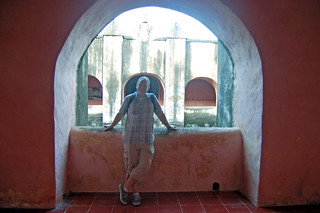 In the garden area of the church, we wandered through a botanical garden filled with exotic plants including bananas.  Most interesting, however, was the stone structure built above a cenote which had housed a water wheel dating from the early 1600s.  Unfortunately the wheel was not present but we could look down into the well that it once spun around in.  As we learned from a small museum exhibition, investigations into this well and the cenote that fed it had revealed lots of weapons.  These dated from the Caste War which was an episode in history I had never heard of before.  It was a conflict that arose between the indigenous Mayan population and the descendants of the European colonists in the second half of the 19th Century.  It made me realise again how little I knew about Mexican history.

Valladolid itself was a bit of an odd town.  It was a warren of streets seemingly all named just “Calle” and a number, a not quite grid system.   We found ourselves a little lost in the maze when trying to exit the centre but that gave us the opportunity to see more of the town than we would otherwise have done.  Some of the streets were really run down with ramshackle houses while others looked beautiful and were very well maintained.  It was quaint but battered.  That was its charm.

Darkness fell quickly as we were driving back towards Cancun with literally no source of light, neither electrical road lighting or light from the moon since the dense foliage was obscuring it. With even less to look at than the morning’s journey to Chichen Itza, it felt like an even longer journey.  We were exhausted after the long return trip so we ate in a Thai restaurant that forms part of the hotel complex and where we received a considerable discount.   I had Tum Tang, a salad of marinated cucumber carpaccio, radish, ground peanuts, edible flowers, and tamarind sauce followed by green curry chicken.   Mr Pict had Nua Dad Diew, strips of fried beef, to start followed by some sort of pork rice stir fry.