Another day; another Mayan archaeological site.  This time – for the last full day of our vacation – we did not drive too far from Cancun, just a little down the coast to Tulum.

While Chichen Itza had impressed for its scale and Coba was fantastic because of its position in the jungle, the thing that made Tulum special was its siting on the rugged cliffs of the Mayan Riviera and above the second longest coral reef in the world.  Unlike the sprawl of the other two ancient cities, Tulum was confined within a fortified outer wall.  That made it must easier to wander around in the blazing heat but also meant that we were a bit sardine-like with all the coach loads of other visitors.  What Tulum had that was entirely lacking at Coba was plentiful information boards so that we could interpret what we were seeing.

There was a palace in centre of the site and it was surrounded by other buildings.  Finally we were given the explanation that the flat platforms in evidence at Tulum and which we had seen elsewhere were the foundation for buildings made from perishable materials.   A few of the buildings had carvings of a descending god on them.  I rather liked his bizarre upside down nature. 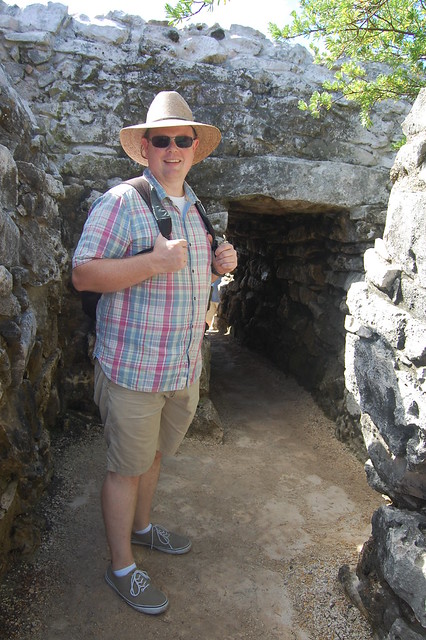 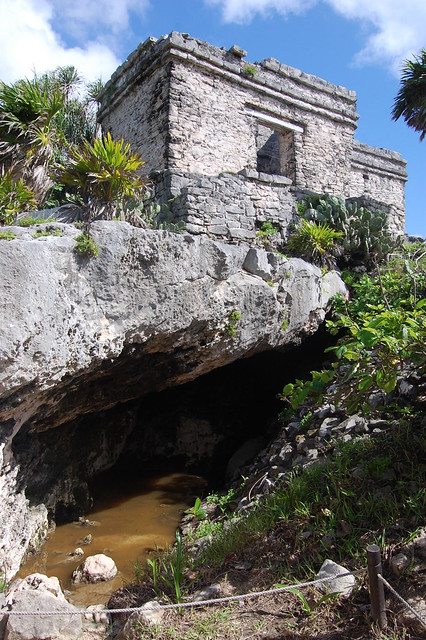 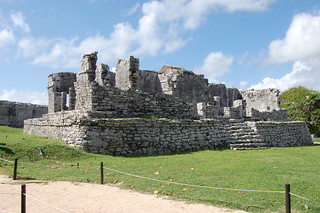 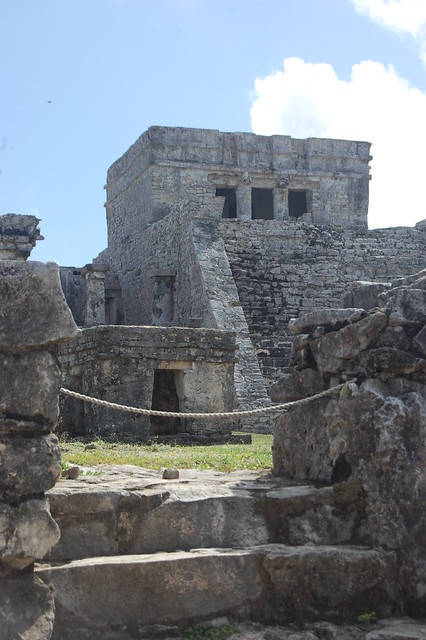 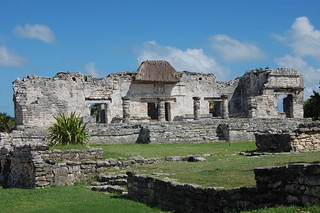 On the promontory, we read about the first contact between the Mayans and the Spanish who, from their ship, thought Tulum looked a lot like Seville.  I could not help but wonder what the Mayans, watching the ship from the cliffs, thought of the European interlopers.  I liked it up on the cliffs because of the cooling sea breeze.  I stopped there to take lots of lizard portraits.  There were lots of iguanas around, wandering with their wide slung cowboy legs.  They were not skittish at all and some even seemed to be posing for my camera but they certainly didn’t want me touching them. I tried though. 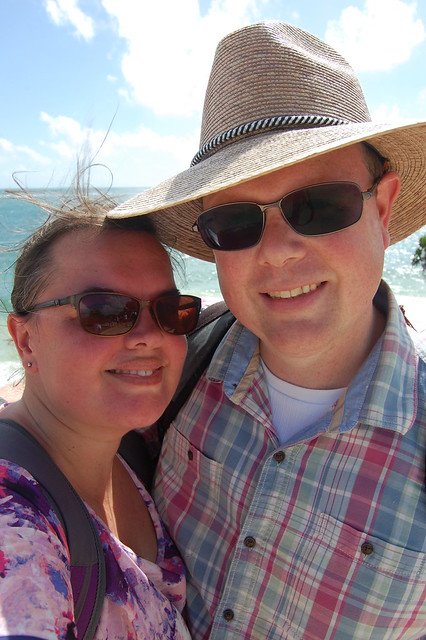 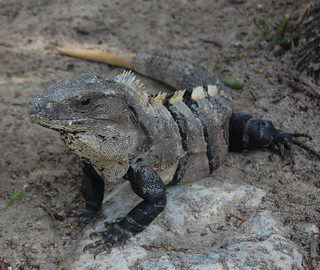 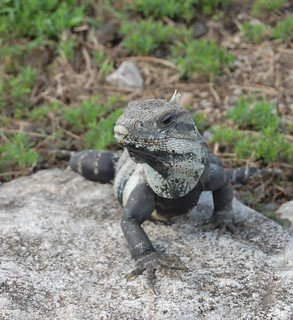 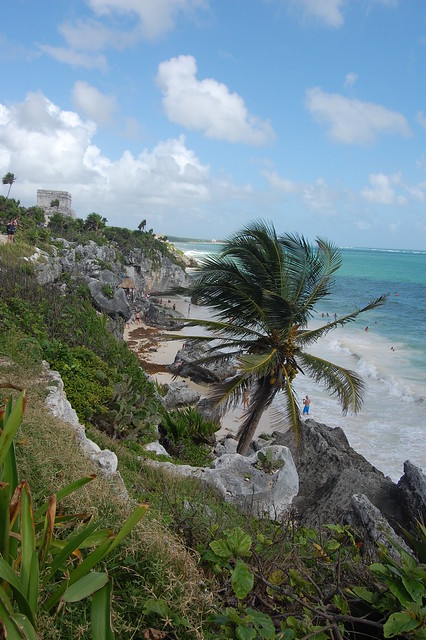 We were disappointed by the actual town of Tulum.  We had high expectations as people had told us that we would love it.  I expected quaint, picturesque streets, interesting architecture, perhaps whitewashed buildings or houses painted in vivid colours.  What we found was just a street of shops selling the same souvenirs and crafts that we had seen all over the place.  There looked to be some intriguing eateries but we were not remotely hungry having had another of our breakfast feasts at the hotel.  The roads running adjacent and parallel to this main road were back to being ramshackle and run down, not much worth exploring, so we headed down the road to the coastline.   We found ourselves on a narrow road lined with cabanas ranging from “hippy” retreats offering sweat lodges, yoga and reiki healing to very swish and swanky looking boutique hotels.  The buildings all blocked any view of the shore line and prevented access to the beach but we had to forge on to its end in order to turn around.

We journeyed back back to hotel to swim.  I did lots of relaxing floating around again.  We finished with a dip in the large jacuzzi again as it was getting chilly and we could warm up that way.  I sat beside a jet so as to get the benefit of the lobster pot hot water.  The jets were so powerful that they kept pushing me off  the seat ledge and I had visions of floating into the centre like a star fish stuck in a spin cycle.   Thankfully my vision was not realised.
We dined in the Argentinian restaurant again.   This time I had caprese salad followed by a dish of chicken coated in some sort of piquant salsa and Mr Pict had a wedge salad followed by another steak.
The following morning at breakfast, the final day of our trip, I kept finding the waiter was taking my buffet plate from me and taking it to the table.  I thought it was because I was right under his nose at the waiter station but they had a surprise in store for me: I was presented with a cake complete with a candle and happy birthday written in chocolate on the plate. It was a very sweet and thoughtful gesture and, as Mr Pict and I ate chocolate cake for breakfast, it felt like a fitting conclusion to our vacation. 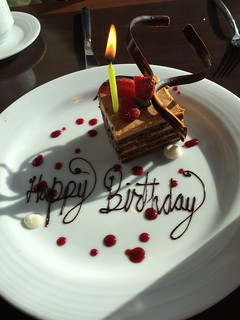 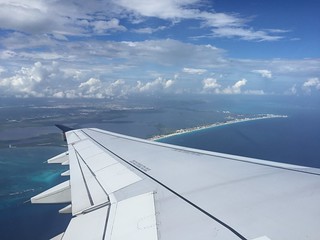