Ever since we adopted our three-legged cat, Satchi, the boys have been wondering when we might adopt a second cat, a buddy for Satchi.  Our original plan had been to adopt two cats at once but that, for various reasons, did not pan out.  We wanted to give Satchi time to adjust to being a tripod, get stronger with his mobility, and generally settle in before we introduced another cat.  I began to ponder whether Satchi might want to be an only cat….

Then my 8 year old was taught persuasive writing at school as part of a unit of work on modes of writing.  He came home with this letter. 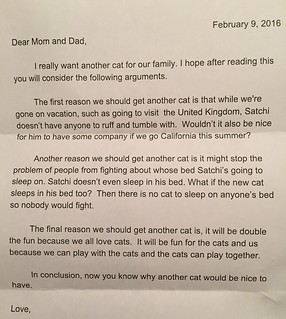 It was a plea for a second cat.  Another cat would be company for Satchi, there would be more cats to share around between Pict family members, and it would multiply the fun in the house.  It was pretty well argued, expressed with clarity, and heart-warmingly cute.  Ugh.  How could we say no?

Mr Pict and I chewed it over for a few days and then we caved.  Persuasive writing education won out.  Along with they puppy dog eyes of four kids.

We went along to another pet adoption event run by the same organisation from whom we had adopted Satchi.  As soon as I walked in, I spotted this tiny little scrap, a wee ginger kitten.  We knew, from discussions with the vet, that we had to have a cat who was also male and was younger than Satchi.  Bingo.  And incredibly he was still available!  The place was pretty packed but nobody had put in the paperwork for this adorable wee furball.  We spent some time with him, checked all his paperwork, and – woohoo! – he came home with us.

He came with the name Peanut and, just as with Satchi, we decided he should keep his name. 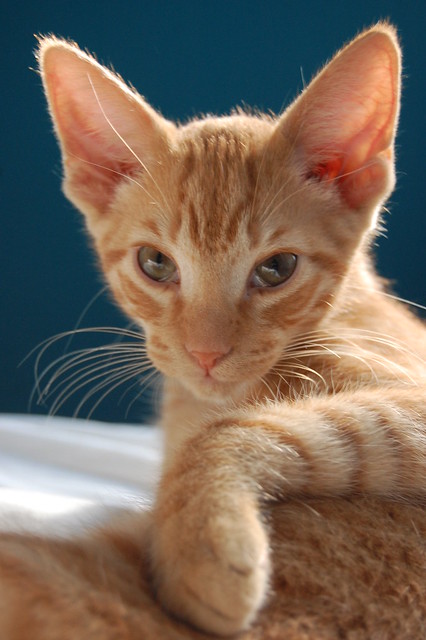 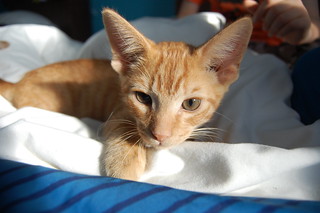 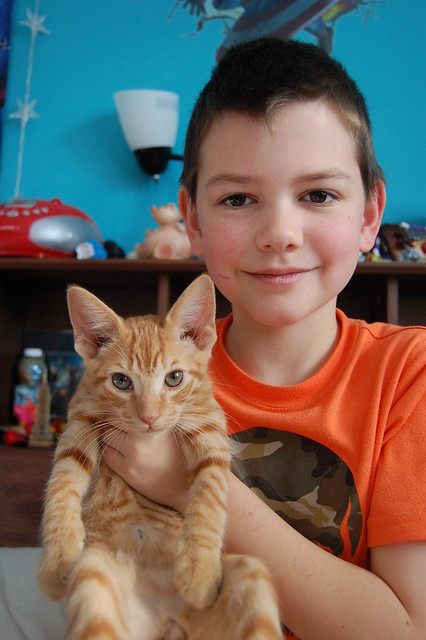 We have to gently introduce Peanut to the household and keep him and Satchi separate for a couple of weeks.  The youngest kids are delighted as it means Peanut is permanently resident in their bedroom and he is proving to be a snuggly wee thing.  My oldest son thinks he looks just like an ancient Egyptian cat and he is being treated like a tiny wee Pharaoh.

Less impressed with this new arrangement of small kittens behind closed doors is Satchi.  He wants in to meet Peanut.  He likes to hang out outside the room and sniff under the door, where Peanut is sniffling and snuffling away on the other side, and occasionally the tips of their paws meet. 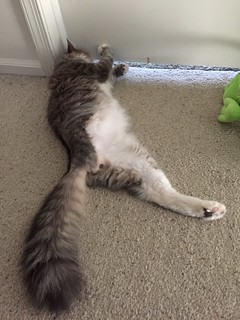 I think so far they are mostly curious about each other but I would be lying if I said I did not have some trepidation about how it is going to pan out when they first meet.  Watch this space. 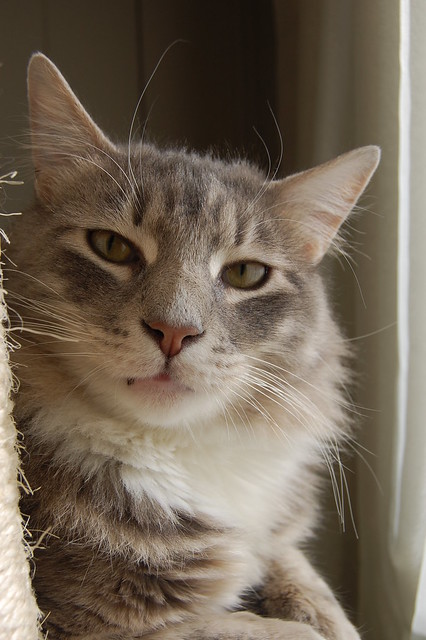 23 thoughts on “The Persuasive Letter and Peanut”