Peculiar though it might seem, for my birthday trip I chose to go for an explore of Laurel Hill Cemetery.  Although I don’t think I qualify as a taphophile, I have always loved cemeteries.  Along with museums, art galleries and libraries, they are my favourite places to visit.  Cemetery trips feature not infrequently on this blog as a result.  It is only surprising, therefore, that it has taken me three years of living in the suburbs of Philadelphia before visiting one of its historic cemeteries.

Laurel Hill Cemetery sits on a hillside above the Schuylkill River and covers a huge expanse of land.  With all the Autumn colour in the trees, it was a rather beautiful spot for a wander even regardless of the history and funerary sculpture.  The cemetery was founded as a garden cemetery in 1836, originally rural but soon eaten up by the growing city.  In some ways it was reminiscent of the huge municipal London cemeteries I always loved visiting (Kensal Green being my favourite) but it was a little more organic in design and not as regimented in its organisation.  Happily, I had done my usual over-planning thing.  I had printed off a map of the cemetery and used the Find A Grave website to plot the location of the graves I was particularly interested in visiting.  This proved useful because not only were the individual plots not numbered but neither were the different areas of the cemetery.  Thanks to my map, however, we were able to locate almost every grave we were searching for.  Annoyingly one of the graves I missed was that of Scottish born John Notman, the architect who had designed the cemetery. 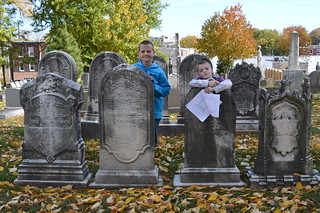 We began our trip by popping into the office where a helpful young man provided us with a bigger version of the map I had printed out and some scavenger hunt activities for the kids.  The scavenger hunt was a great idea as it not only kept the kids occupied but also engaged them with subjects such as the symbolism of monumental masonry.  Directly opposite the Gatehouse was a sort of grotto containing a statue depicting Old Mortality, his horse, and the author Sir Walter Scott – plus a bust of their sculptor.  In Scott’s story, Old Mortality wanders around Scotland preserving the memories of Covenanters by carving the inscriptions on their headstones.  Thematic connection to tombstones aside, it was a tad obscure. 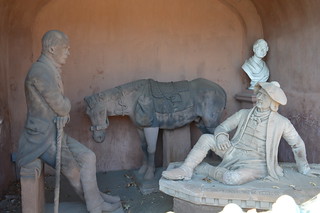 Just behind the statue was our first famous grave of the trip.  In the shrubbery was the Deringer family plot, including the grave of Henry Deringer, the innovative gunsmith known for the Derringer pistol.  Just a short wander away, I found the unassuming grave of Sarah Josepha Hale.  An author and activist, Hale is now principally remembered for two things: it was she who wrote the nursery rhyme ‘Mary had a Little Lamb’ and who successfully campaigned for Thanksgiving to become a national holiday.  Although I am not American, I love Thanksgiving so I shall be sure to raise a glass to Hale in a couple of weeks’ time. 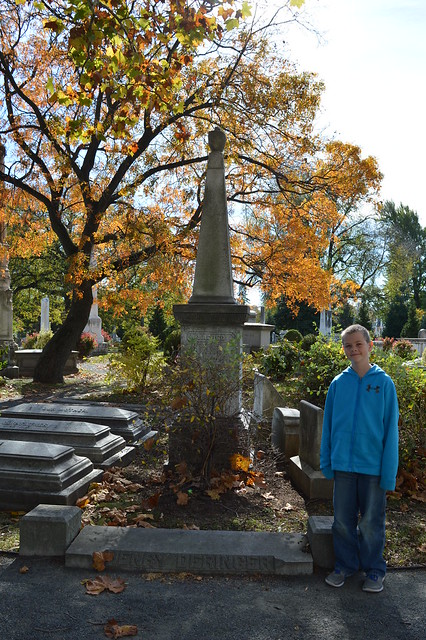 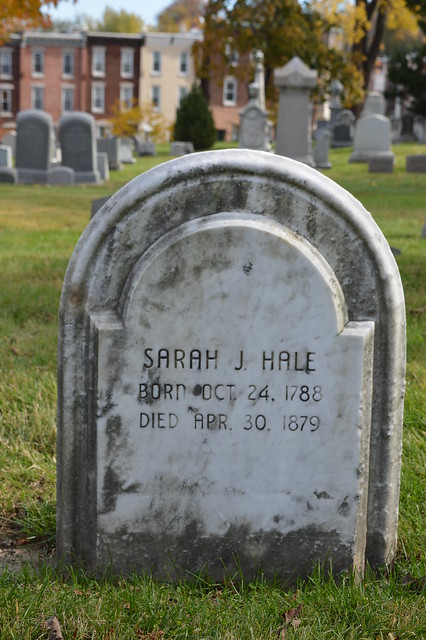 I visited the graves of a couple of photographers because one of my nerdy interests is the history of photography (partly because I am descended from a Victorian photographer).  First up was Frederick Gutekunst, one of the most famous American photographers of his era.  His studio particularly boomed as a result of the Civil War as soldiers, including Generals such as Ulysses S Grant, stopped in to have their portraits taken.  I was more excited, however, to find the grave of Robert Cornelius.  Cornelius was a photographic pioneer who, while experimenting in order to perfect the daguerrotype, in 1839 took a self-portrait which is the first photographic portrait.  Cornelius’ grave was small in its own right but was especially small compared to the grand tombstones in that particular area of the cemetery.  I was, however, able to spot it from a distance precisely because of that famous selfie because a small oval copy of it was stuck to the fascia of the grave marker. 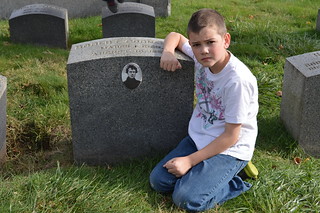 My 11 year old is currently learning about Explorers at school so I dragged him down a few flights of steep stairs past lots of marble mausoleums to find the tomb of Elisha Kent Kane.  Kane, a naval medical officer, was part of two Arctic expeditions launched (in vain) to locate and rescue explorer Sir John Franklin.  The second search led him to travel further north than anyone had previously managed, thereby paving the way for those Arctic explorers who came after him.  Sadly, the site of Kane’s tomb was overgrown and rather neglected.  This was because it was positioned right by the roadside on a fairly steep slope and was, I assume for safety reasons, fenced off from the rest of the cemetery. 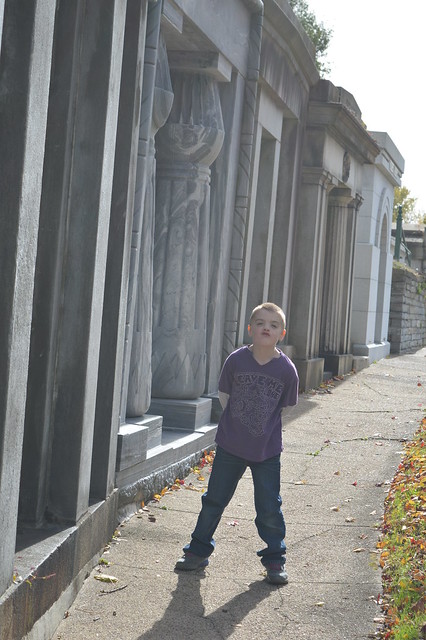 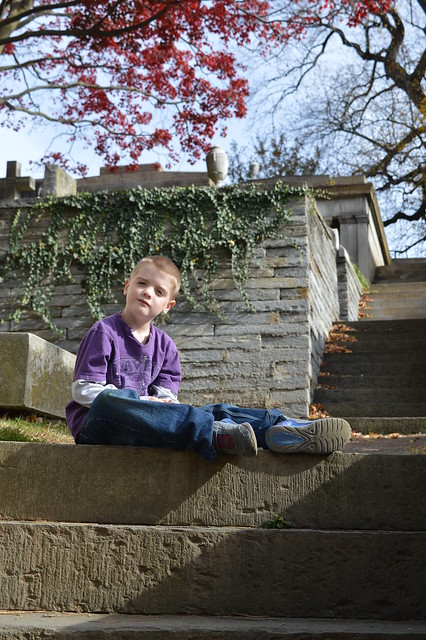 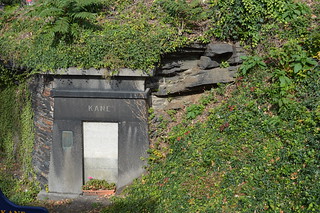 When Laurel Hill Cemetery was in its infancy, the founders found it a challenge to attract business.  People were too used to being buried in graveyards next to whichever building they attended for religious services.  They, therefore, had the interesting idea of having the remains of some famous Philadelphians exhumed and then reinterred in the cemetery.  As a business practice, that is a tad ghoulish.  It meant, however, that I got to see the grave of Thomas McKean, one of the signatories of the Declaration of Independence, and David Rittenhouse, astronomer, surveyor, and first director of the US Mint. 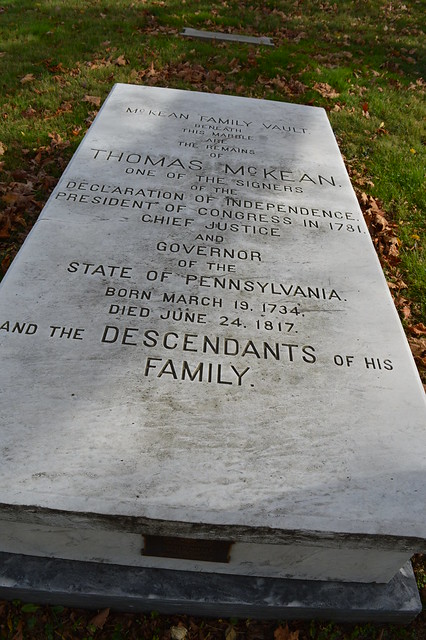 The cemetery contains many military graves, including those of over 40 Civil War Generals.  As you may recall, Mr Pict is a Civil War nerd so he was particularly interested in spotting the Civil War graves.  The two most significant of these that we visited were those of Generals Meade and Pemberton.  General George Meade was a career military man involved in many conflicts but he is known to me for his part in Gettysburg where he led the Army of the Potomac, helped secure the Union’s victory, and contributed to that turning point in the war.  Because Mr Pict takes us all off to Gettysburg at least once a year, Meade was one of the Generals I could have named from the top of my head.  John Clifford Pemberton, on the other hand, is the only Confederate General buried at Laurel Hill Cemetery.  Despite being a northerner and having two brothers fighting for the Union, Pemberton had chosen to fight for the Confederacy for personal reasons.  As a Confederate, his internment in Laurel Hill had been controversial.  Among those who campaigned against his burial there were the family of General Meade.  Ultimately he is there, albeit in a far flung corner of the cemetery. 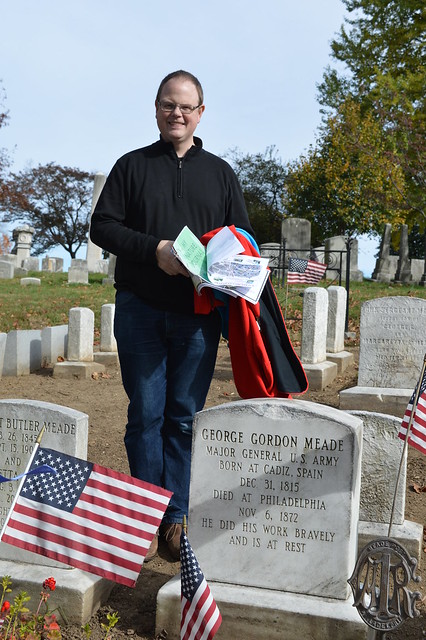 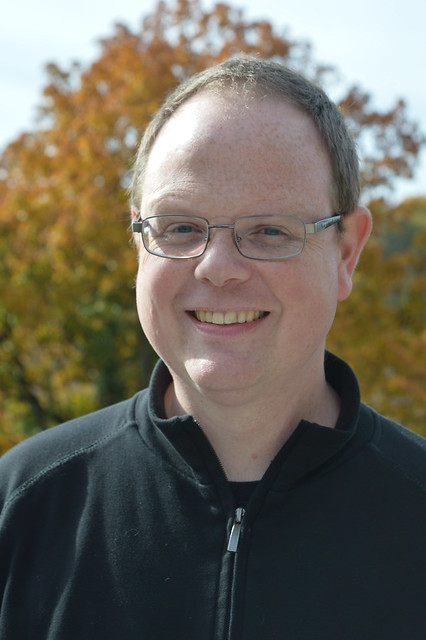 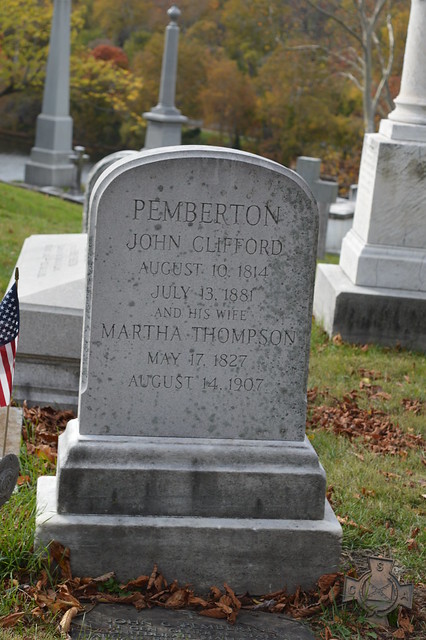 Finally, we visited the graves of several people associated with the sinking of The Titanic.  I almost literally stumbled over the plot where Lily and Olive Potter, who survived the sinking, were buried.  We then found the Widener Mausoleum on the stretch of the cemetery known as Millionaire’s Row.  The Mausoleum is actually dedicated to Peter A B Widener, the wealthy Philadelphia businessman and philanthropist.  His son, George, and grandson, Harry are also commemorated there.  Both men drowned when the Titanic sank and their bodies were never recovered.  George’s wife Eleanor survived and she established Harvard’s famous Widener library in memory of her son, a passionate collector of rare books.  Lastly, we found the mausoleum of William Crothers Dulles.  Dulles’ was one of the few bodies recovered from the Atlantic and identified, this due to his monogrammed tie clip. 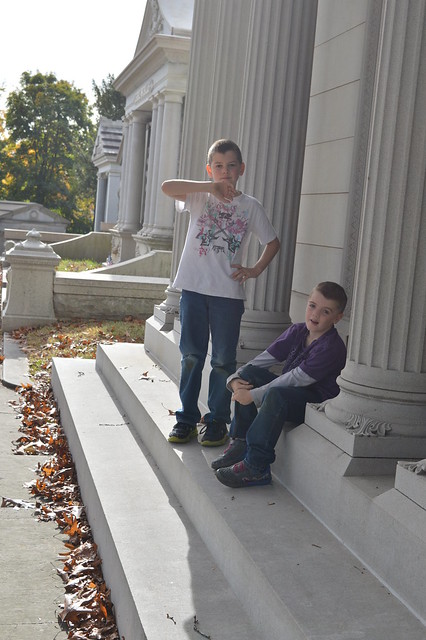 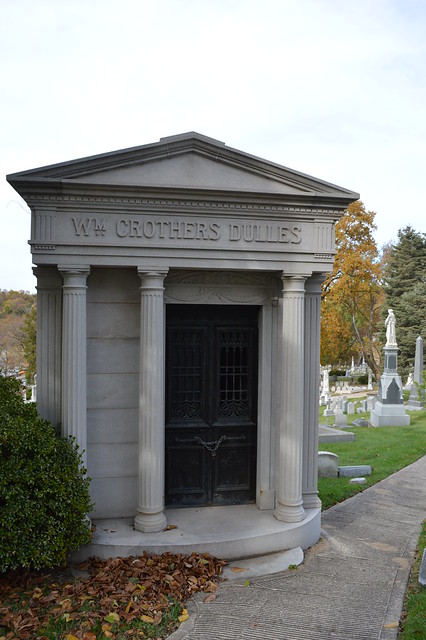 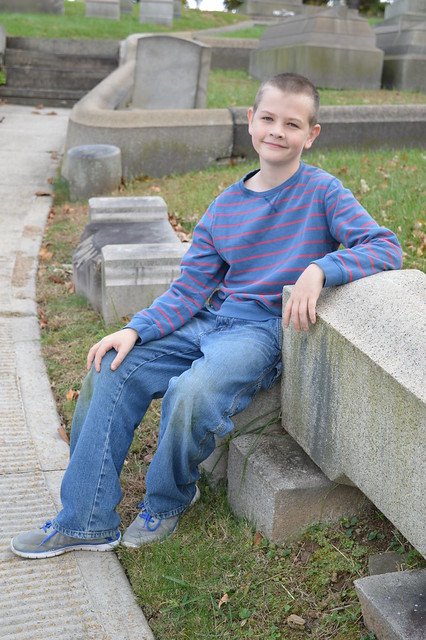 I recognise I have filled this blog post with the potted histories of dead celebrities.  This is because that is something I find it interesting to do when pootling around in cemeteries.  I like the way cemeteries and graveyards intersect with history, whether that is family history, social history, national or global history.  It is in large part because I am a history nerd that I love to visit cemeteries.  However, I also love cemeteries simply because they are lovely spots of wander around in, an oasis of calm and serenity away from the hustle and bustle of the town or city.  Laurel Hill had plenty of that to offer too.  The views across the river and to the rest of the city were pretty impressive, especially when we got onto higher ground, and the Autumn colour in the trees was magnificent.  The boys particularly enjoyed playing in a huge pile of orange leaves.  They rolled around in them, threw leaves in the air, jumped into piles of them, and made “leaf angels” in them.  My 9 year old also made several insect and invertebrate friends on his travels. 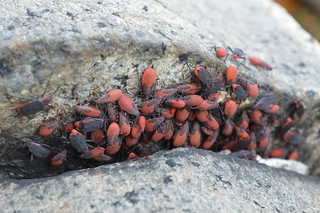 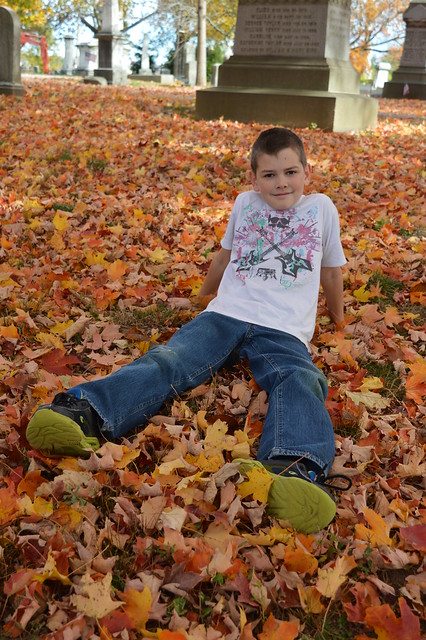 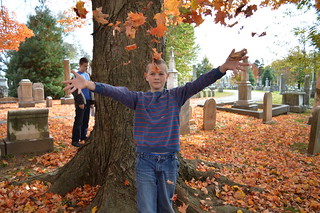 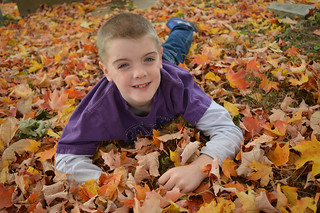 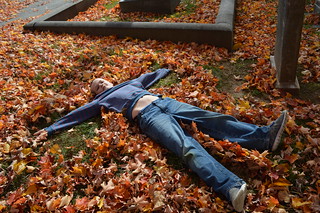 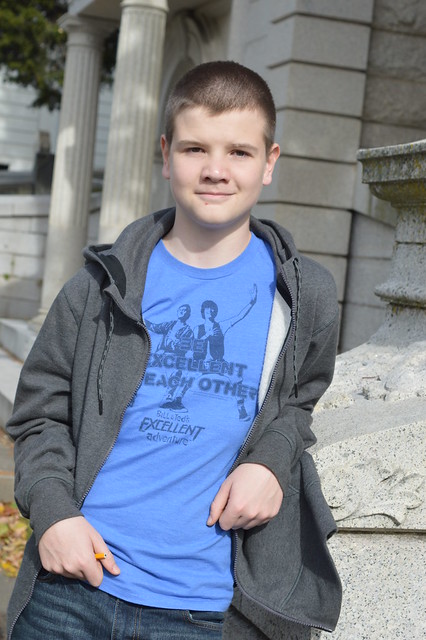 The kids also enjoyed having the freedom to roam.  Normally on trips into the city, I have to rein them in a bit in order to keep an eye on them and stop them getting lost.  But in a quiet cemetery, it was possible to let them wander around and explore and be their feral little selves so long as they didn’t wander too far.  Them having a bit of freedom also afforded me the opportunity to seek out the graves I was interested in and also enjoy the monumental sculpture in the cemetery.  One of the most impressive of these was the sculpture on the Warner grave.  The sculpture depicts a soul emerging from the tomb which is being opened by a female figure.  The tomb was sculpted by Alexander Milne Calder, fellow Scot and originator of the Calder sculpting dynasty.  The other tomb I really liked was one for a family named Berwind which is marked by a beautiful figurative sculpture titled Aspiration by another local sculptor, Harriet Whitney Frishmuth. 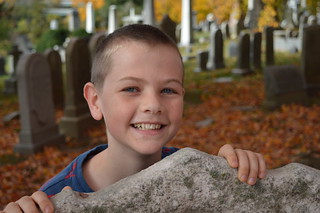 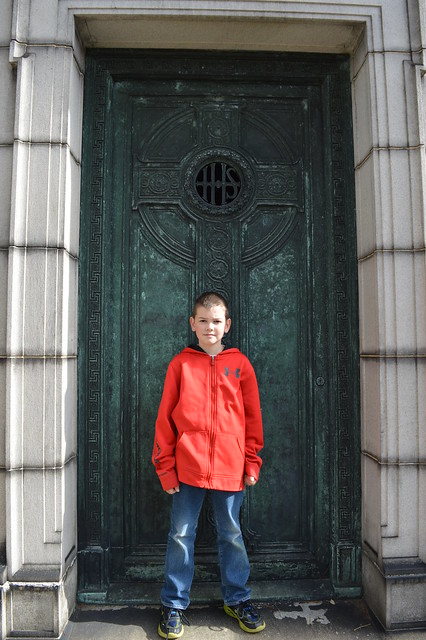 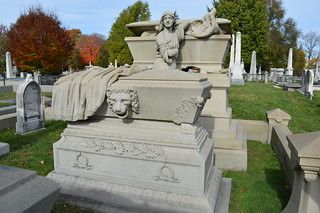 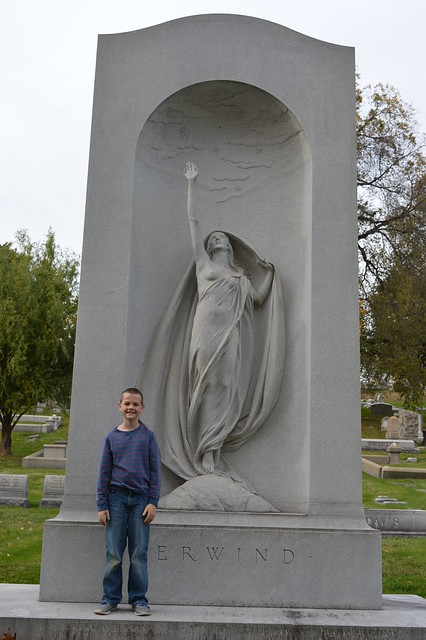 As you can no doubt discern, I was in nerdy cemetery heaven at Laurel Hill Cemetery.  Had I been on my own, I could have kept meandering around the vast cemetery for hours longer.  As it was, Mr Pict and the Pictlings were very tolerant and allowed me plenty of time to explore, locate graves, and take photographs.  After the cemetery, we headed into the city centre for my birthday meal.  We ended up ditching the booking Mr Pict had made at one restaurant because we were too early for the full menu to be available and instead ended up at a Chinese restaurant where we had an amazingly delicious feast and the boys sampled and enjoyed things they might otherwise have not tried.  All in all, therefore, it was a very successful birthday trip. 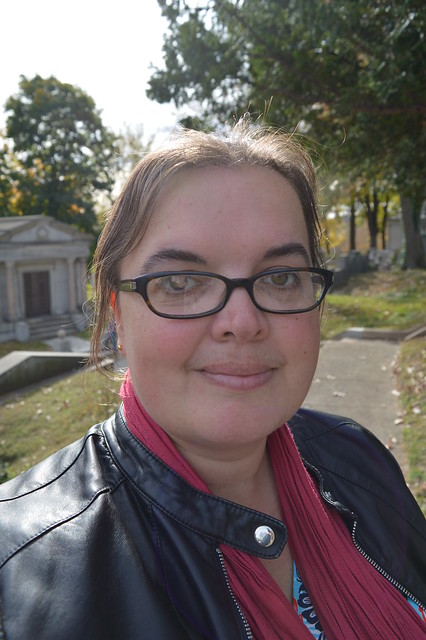 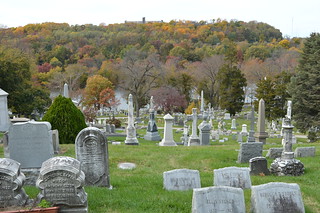