After our visit to the National Civil War Museum, we drove to the State Capitol down State Street.  What a spectacular view!  It is a very grand and imposing complex, full of interesting angles and shapes and topped with a fabulous dome.  The current – and sixth – capitol building dates from 1906 and is a splendid example of that era’s architecture, known as American Renaissance. 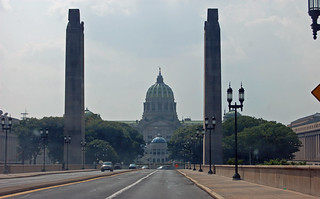 We parked up and decided to go for a wander around the exterior of the building.  This involved an amble through the grounds, a public park dominated by a monument dedicated to the dead of the Mexican-American War.  It is a 64 foot column topped by a guardian angel. 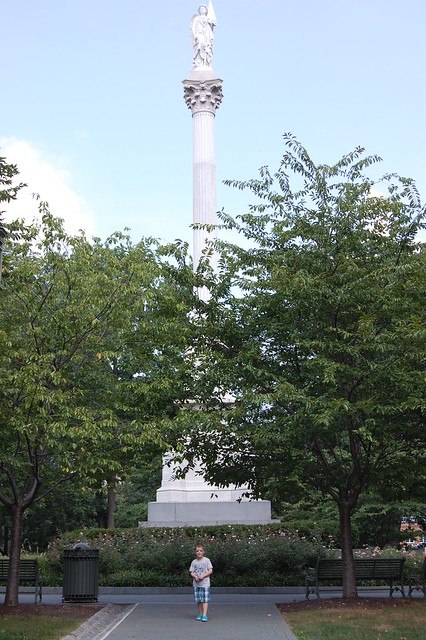 I was most taken by the building’s magnificent dome which is covered in green glazed terracotta tiles.  Apparently it is modelled on the dome of St Peter’s Basilica, weighs 24,000 tonnes and is 94 feet in diameter.  The dome is completed at its summit by a golden statue named Commonwealth – though sometimes named Letitia for William Penn’s daughter.  She stands on a 4 foot globe and holds a staff of justice which is topped by a garland and eagle.  Unfortunately the east facade of the building  was undergoing extensive renovation on the day of our visit so areas were roped off, there was construction equipment everywhere and, most annoyingly, the fountains were switched off.  Nevertheless we had a good nose around as much as we could tolerate in the absolutely baking heat. 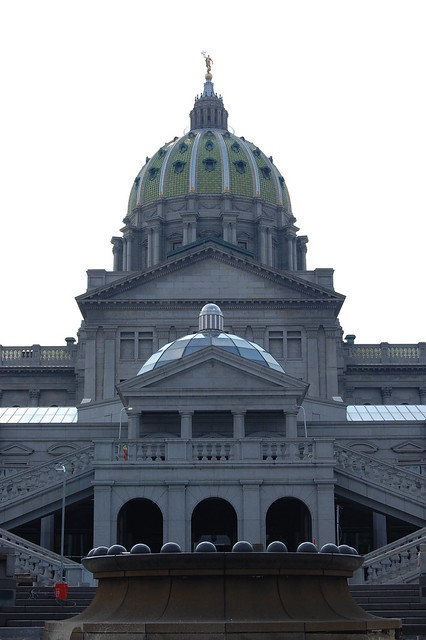 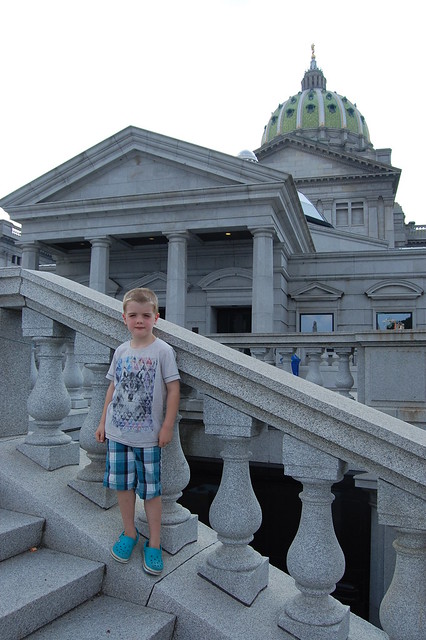 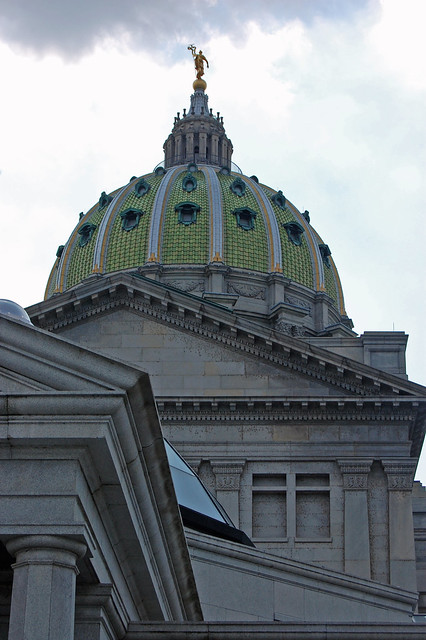 Then – an unexpected treat – we got to go inside!  We had not anticipated being permitted to visit given how stringent security checks have to be these days.  However, a friendly security guard processed us all quickly and soon we were admitted entrance.  The security guard pointed us in the direction of a free guided tour but unfortunately our parking meter was going to run out before it concluded so we had to give that a miss.  Next time maybe.  Instead we just had a little amble around ourselves.

We saw a lego version of the Commonwealth statue and a beautiful model of William Penn’s ship Welcome.  My 9 and 6 year old’s loved watching a model designed to show the workings of law making but which they just enjoyed as a kinetic sculpture, like a large marble run.  Having entered on the east side, we took an escalator up and then some stairs down in order to reach the west side, which is much more grand and imposing and really ought to have been the entrance we took to get the full impact.  There we saw the rotunda with its spectacularly grand staircase sweeping upwards through the space.  The bottom of the stairs were flanked by angels holding up glowing globes.  I loved their elegant lines and the sweep of their wings. 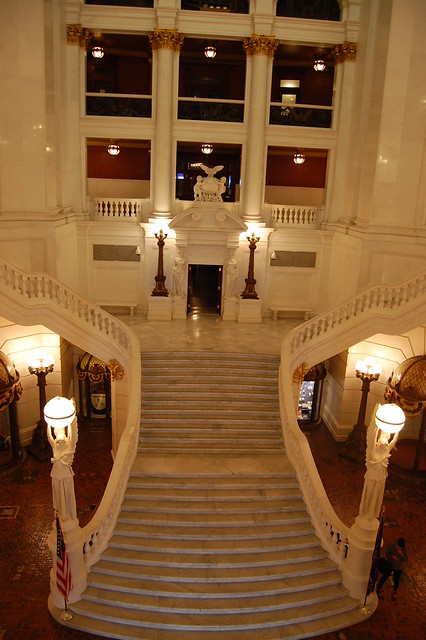 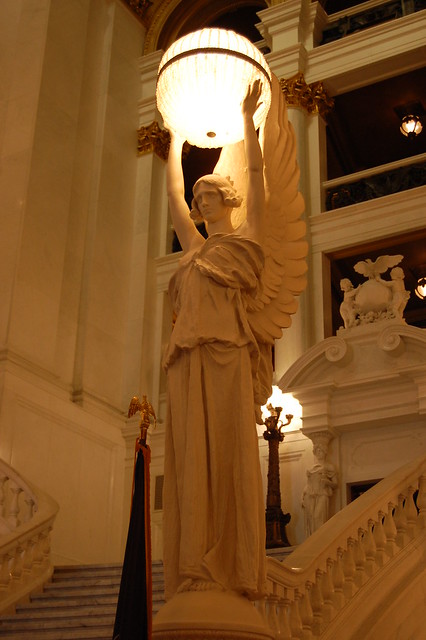 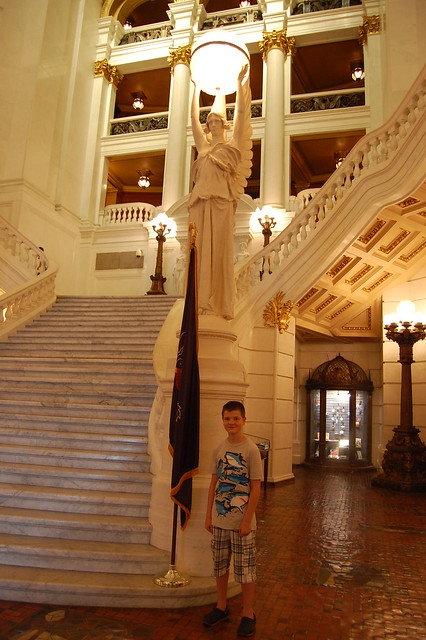 The decoration of the rotunda itself is stunning.  I loved the four paintings by Edwin Austin Abbey that symbolised Science, Religion, Justice and Art.  All of the murals in the Capitol’s interior were wonderful but I thought those were particularly beautiful.  We also all enjoyed seeing the floor which was decorated with Moravian tiles by Henry Chapman Mercer.  These were mosaics forming pictorial representations of Pennsylvania’s  history, industry, flora and fauna.  The kids liked the bat best because it looked like Batman’s symbol. 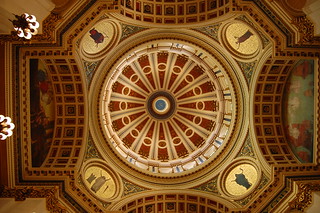 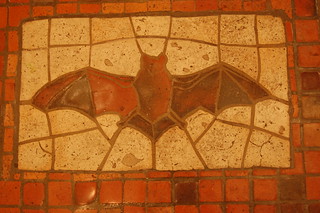 I wish we could have spent longer exploring the Capitol but I am sure we will return to Harrisburg at some point.  For this trip, however, our parking meter was about to run out so it was time to leave the cool, shade and peace of the Capitol and emerge back out onto the roasting streets and clamber back into the sweltering car.  The boys were very glad that our hotel had a swimming pool to play around in after such a hot day. 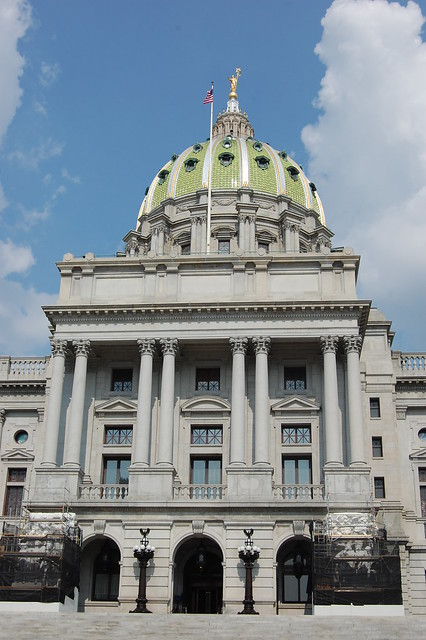 13 thoughts on “The Pennsylvania State Capitol”