It was my birthday on Tuesday and I happened to be home when my kids were at school because –  in a stroke of lucky timing – there was an election and my workplace is used as a polling station.  I gifted myself a chunk of art time and I chose to focus on an illustration of my favourite movie, something I had been planning to do for ages but could never find the time to embark on.

My favourite movie of all time is ‘Jaws’ and it has been since I first saw it at age 8.  My tastes and preferences in all other things have evolved over the intervening decades but ‘Jaws’ has hung on in there as my favourite film.  Despite my tender years, the movie did not inspire a dread of sharks or fear of the ocean; instead it inspired a lifelong fascination with and love of sharks.  When I was wee, what I loved about the movie was the thrill and excitement of the storytelling, in my teens I realised that really it was about three very different people having to cooperate in order to defeat their adversary, and then in adulthood I appreciated that it was both of those things and more and that this blockbuster summer movie actually has a lot of nuance to it and some (pun totally intended) toothy themes.

So here is my illustration of the brave trio of scientist Hooper, Police Chief Brody, and salty old seadog Quint alongside their nemesis, the shark. 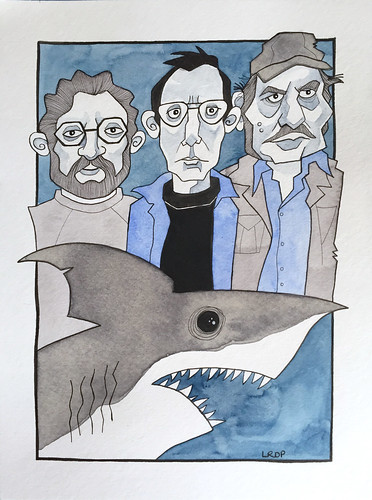 PS I took the photo before adding Quint’s name patch on his jacket. You’ll just have to trust me that it’s there now.