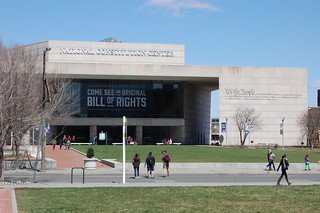 We took a trip into the city on Saturday and decided to drill some learning into the kids by taking them to the National Constitution Center.  My oldest had been before, on a school trip mere days after we had arrived in America, but the younger boys have only a vague knowledge of the constitution and of the role Philadelphia played in the birth of this nation.  My 9 year old is always cynical about such trips (“I know you are trying to educate me, you know”) but we compel him to participate anyway and ultimately he engages on at least some levels. 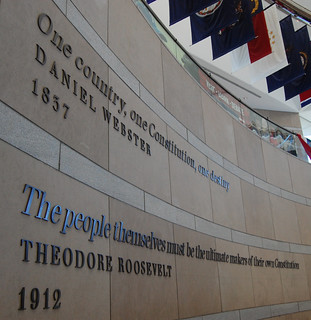 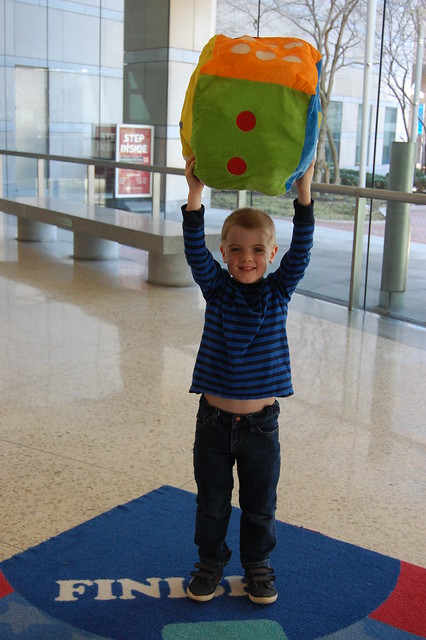 The first stage of our visit was to go into the Kimmel Theater, a rotunda in the middle of the center with stacked seating and 360 degree circular screens at the top.  There a mixture of a live presenter and projected visual images delivered the message about the importance of the constitution – how democracy will function, balancing power between branches of that democracy, enshrining freedoms and amending the document over time in order as values evolved and understanding of democracy progressed.  My boys – even my dinky five year old – were absorbed in it throughout and genuinely seem to have gained a basic understanding of the constitution and how it functions.

After the introductory show we were ushered up the stairs and out into a circular gallery.  We were told that we could take the outer circumference and learn about the history of the constitution from its writing to the present day or we could take the inner circumference and learn about civics, the practical application of the constitution.  We opted to take the civics route as it looked to be more interactive and interactive is always good for keeping our kids on-task and stimulated.  As fast readers, however, my oldest and I were able to flit between the outer and inner rings and look at some of the history displays too.

Some of the highlights were touch screens filled with portraits where the kids could select a person and learn more about them and their contribution to the inception of or development of the constitution; a section about the role of the Supreme Court where the kids could dress up in judicial robes; a genuine jury box where the boys learned about the importance of trial by jury; interactive, touch screen voting booths where the kids could read policy statements by randomly selected Democrat and Republican Presidents and then decide who to vote for; historic exhibits telling the story of different presidents and other individuals, pivotal moments in American history and the reasons for the various amendments from the Bill of Rights onwards; and repeated screens inviting the kids to learn who could vote at what period in time so that they could understand how the franchise was gradually extended thanks to constitutional amendments. 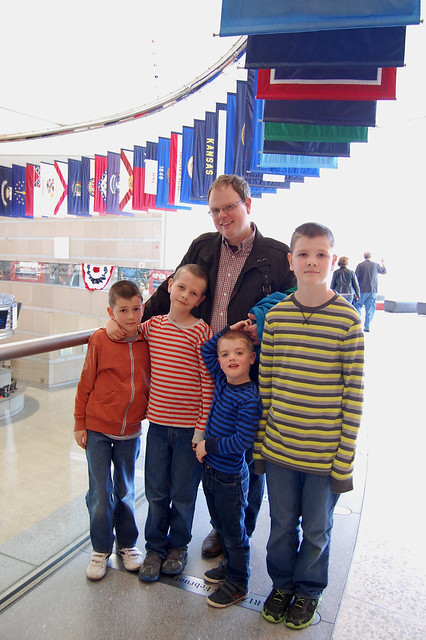 We also took the kids into the temporary exhibition which was all about photos of President Kennedy.  My 8 year old had recently completed a school project on JFK (each child was assigned a president – my 9 year old chose Garfield last year) and he is generally keen on learning all about the various presidents so he was excited to see the photos.  The title of the exhibition was ‘Creating Camelot’ and it showcased the photographs that Jacques Lowe took of the President, First Lady and their children.  The photographs were not only interesting in terms of what they suggested about the image that the Kennedys chose to project or because of the way in which private lives were filtered for public consumption but also because they told a story about preservation.  Lowe’s photographs were actually lost in 9/11 so a film explained how photographic technicians had painstakingly recreated the images by digitising them from printed versions, particularly contact sheets. 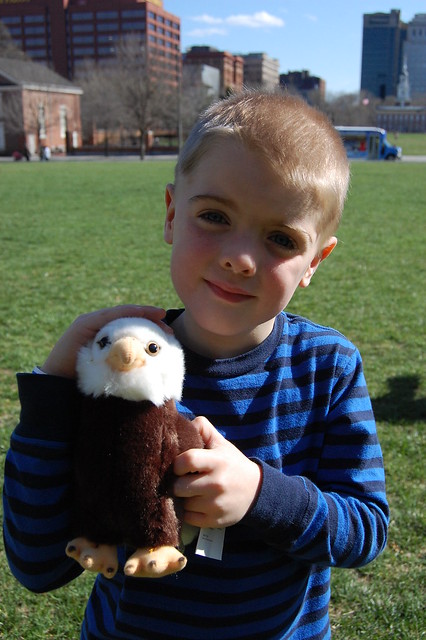 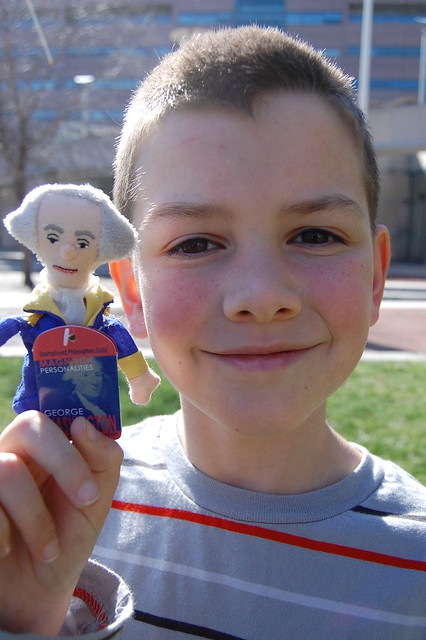 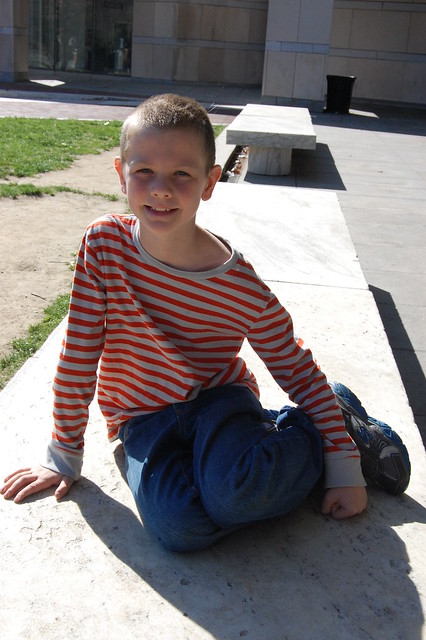 After a quick scoot around the gift shop – because some of my kids can apparently not complete a visit anywhere without visiting a gift shop and spending their pocket money – and a play on Independence Mall, we headed off to dinner.

Dinner was actually the reason why we were in the city in the first place.  My oldest is about to turn 12 and as a birthday treat for him we decided to take the kids for a surprise dinner somewhere we would normally never go.  Our destination was Max Brenner, a chocolate restaurant.  As soon as the kids spotted the word chocolate on the building, their eyes popped out on stalks and they began to leap around with excitement.  We insisted that they eat a main course first before proceeding to dessert even though dessert was the main point of the visit.  I had a delicious veggie burger, more succulent than most veggie burgers, that had a wonderfully tangy cilantro mayo on it and that was served with some crisp yet fluffy waffle fries.  Yum but on with dessert.  Mr Pict chose a massive sundae crammed full of tasty morsels, I had a s’more crepe, my middle two sons shared a massive bowl filled with cake, cream, ice cream, strawberries, caramel sauce and crunchy chocolate balls, my youngest had a huge syringe filled with chocolate ganache which he sooked every last drop from, and my oldest had a chocolate pizza topped with everything including toasted marshmallows.  He has been dreaming about a chocolate pizza for years so this was his dream come true.  For a fun, celebratory indulgence, it was a completely perfect experience. 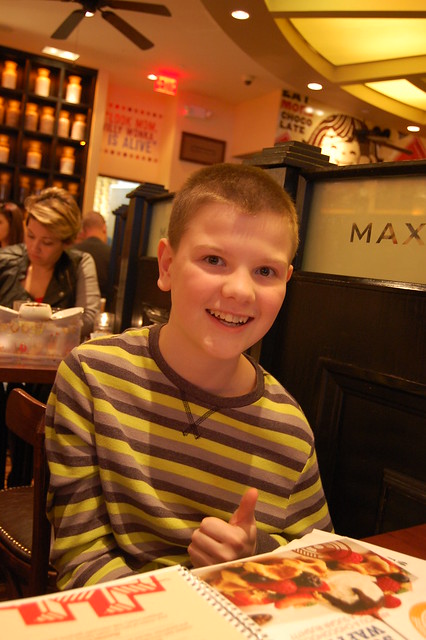 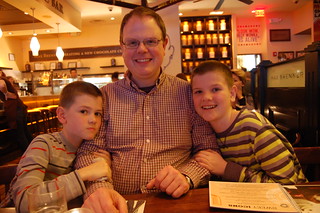 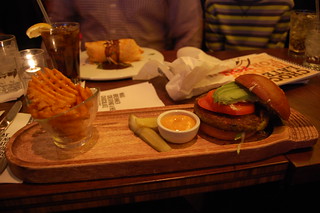 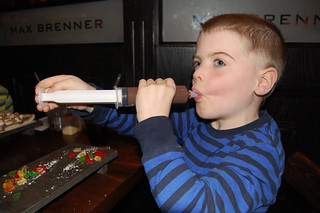 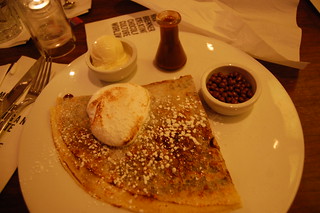 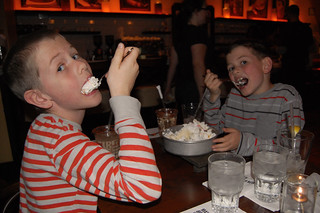 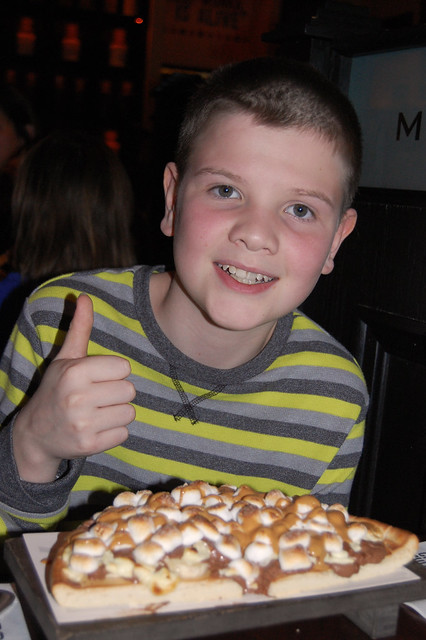