At last!  After three monsters in a row, I get to draw a human.

Zeus, of course, was the chief god among the Greek gods, the head honcho of Mount Olympus.  I assume Zeus got this gig because he was the child who slaughtered his father and thus saved his siblings, like a gory version of primogeniture.  According to the version of the myth I know, a prophecy stated that one of the children of Kronos and Rhea would overthrow the father.  Kronos, therefore, did what any reasonable parent would do and chowed down on his kids.  Rhea, however, prevented him from munching Zeus by giving Kronos a rock to swallow instead.  He must have been a Titan of strange appetites to not detect the difference between a person and a rock but when have the Greek myths ever been logical? So Zeus was able to grow up into a strapping young chap who could fulfil the prophecy, defeat and slaughter his father and release his siblings from his belly.

After defeating the Titans, Zeus and his big brothers, Poseidon and Hades, drew lots to see who was going to get to rule what.  Hades ended up with the Underworld, Poseidon with the waters and Zeus got the sky.  I wonder if Zeus rigged it?  I don’t have a great deal of time for Zeus.  All of the Greek gods are fickle and abuse their power, abusing others as their playthings, but Zeus is especially unsavoury – probably because I am female– because of his attitude towards and treatment of women.  More than just being a “player” or “ladies’ man”, Zeus is a rapist. Any woman he couldn’t charm, he took by force or trickery.  This is my modern perception, of course, because in ancient times he was celebrated for this behaviour and for fathering so many offspring, but nevertheless that is why I don’t dig Zeus as a character.

I decided to keep my drawing simple today so I drew Zeus’ head in profile.  As he was gifted the thunderbolt – and power of thunder and lightning – by the Cyclopes, I decided to use the thunderbolt in my drawing to make it clear who my drawing depicted.  I gave him stormy-grey eyes and a beard with wisps of sky blue in it as I thought those meshed well with his powers and domain respectively.  Wishing to add a bit more colour and pattern, I gave him a laurel wreath.  I was then chastised by my 8 year old son who informed me that the Greek gods did not wear laurel wreaths, only their Roman counterparts.  Oops.  I enjoyed adding all the detail of the veins in the leaves so nevermind.  I outlined the lightning bolt in gold as that seemed appropriate for a magical weapon belonging to a god.  My gold ink is a bit of a pain to work with.  It separates really quickly so I had to stir the pigment into the base and then work quickly with my dip pen before it started to separate out again.  I think it does add a bit of pizzazz to the drawing though. 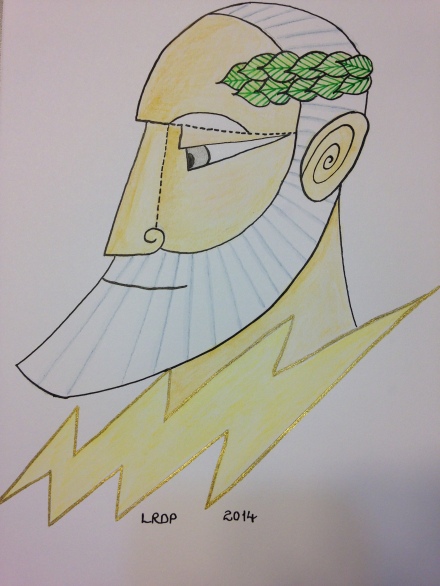 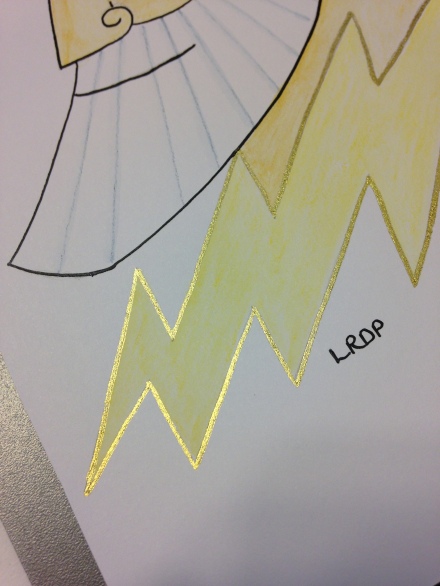