After our day spent at Antietam Battlefield, we spent Memorial Day at another site important to the history of the Civil War: Harpers Ferry.  We had actually attempted to visit Harpers Ferry last Summer as part of our road trip.  That plan had to be abandoned because of torrential rain.  This was our second chance to visit and we hoped we would not be rained off again.

The whole town of Harpers Ferry (which did once have an apostrophe) is contained within the National Historical Park.  As such, parking is seriously limited and nowhere near the centre of town.  We, therefore, parked up at the Visitors Center (being sure to stamp our National Parks passport) and took the shuttle bus down into town.  It is a system that works well and is no doubt effective in preserving the integrity of the town.  The town is historically important largely because of its geographical situation.  It is built on an area of land where the Potomac and Shenandoah Rivers meet.  All of that water generated power and that power could be harnessed for industry.  Upon visiting the area, George Washington determined it should become the site of a Federal Armory and Arsenal.  It was the presence of this facility that led to it become the scene of John Brown’s Raid, an event that contributed to the tinderbox of causes that sparked the Civil War.

Since the shuttle bus had just offloaded a whole pile of people at once, we decided to steer away from the town centre for a bit and instead headed towards the river, following its course around to the railway bridge.  This bridge crosses over to a mountainous area named Maryland Heights.  The bridge is, of course, an example of the town’s industrial heritage.  We learned that – as was true in many places – there was competition between the railroad companies and the canal.  The canal reached the town just one year ahead of the railroad which ultimately led to the demise of the canal.  We walked across the railroad, contemplating hiking up the mountain to take in the breathtaking views.  Tempting as it was, we decided it would eat up way too much time, energy, and goodwill from the children to scale the mountain.  Instead, the wander across the rail bridge was worthwhile to the kids because they found a baby turtle sitting on a tree branch above the water. 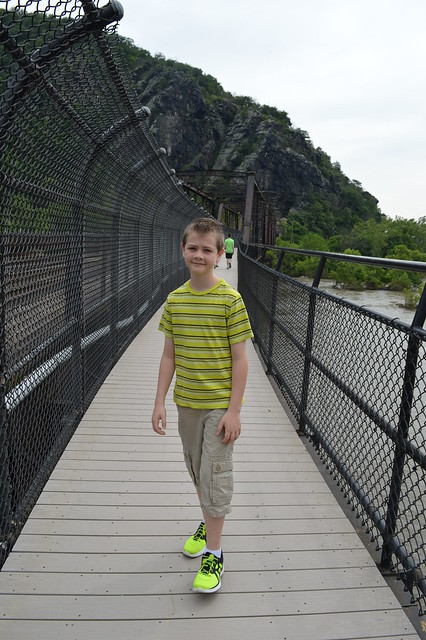 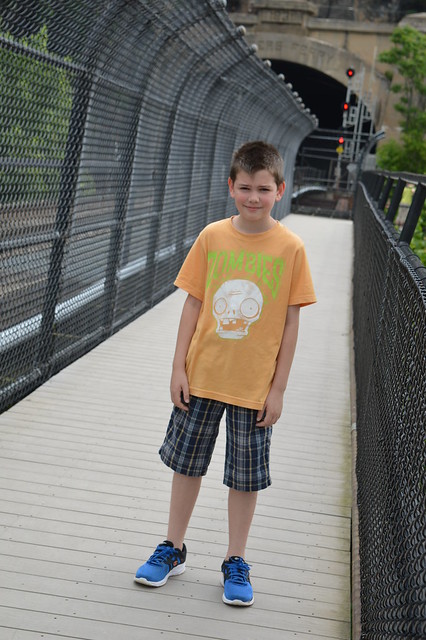 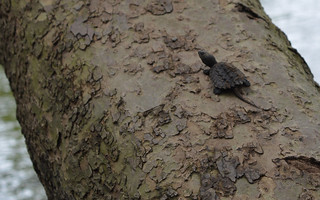 Our first stop in the town was John Brown’s Fort.  The building (originally a fire engine house) is inauthentic, having been relocated and rebuilt on a slightly different site but it illustrated the town’s most famous event.  In October 1859, abolitionist John Brown and a band of men raided the town with the intention of inspiring a slave rebellion.  Not only did the slaves not readily join the group but Brown and his comrades made several strategic errors that doomed them to failure.  They managed to capture the Armory on the first evening but by the following day they were besieged in the engine house.  It all went horribly wrong from there.  The President ordered the Marines in to end the siege.  They were commanded by none other than Robert E Lee – wearing mufti since he was on leave at the time.  That brought the raid to an end.  Harpers Ferry suffered massively during the Civil War.  The same geography that had been advantageous meant it was strategically important to the armies of the north and south and thus it switched between the Confederacy and the Union eight times.  Further, when the Federal garrison surrendered to the Confederates in 1862, it was the largest military surrender in US history until World War II.  In the 2oth Century, poor Harpers Ferry was subjected to a battering from the environment as storms and floods destroyed much of the town that was situated on the flood plain and brought its industry to an end. 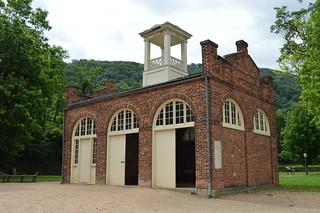 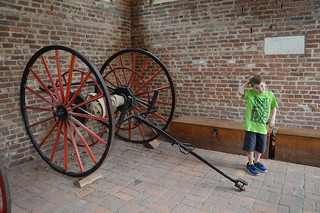 That harsh history was evident in the layout of the town.  The buildings closer to the water and at a lower elevation were preserved for their history but definitely had a worn and abandoned look to them and most of the industrial buildings lining the riverside were nothing more than rubble and rocky outlines.  The buildings that lined the roads that ran uphill, however, were in a much better state of preservation and were still being used as dwellings and as shops and eateries.  I loved the architecture of the place as different strategies had been used to manage the steep incline and the heights of the buildings.  We bought the boys ice cream and wandered up and down the street. 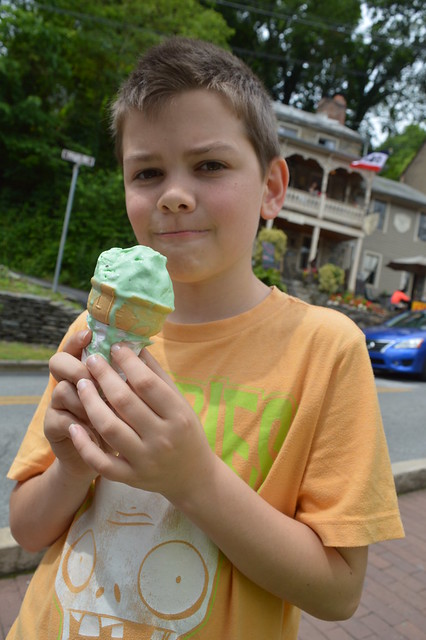 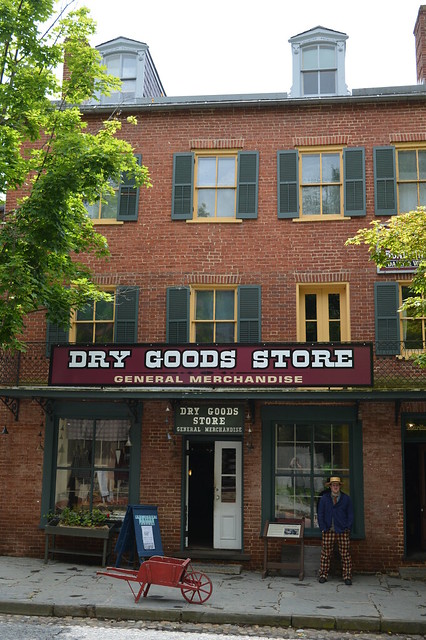 We then popped into a confectionery shop.  This turned out to be a fascinating little place and another genre of history still – edible history.  The owners had researched historic recipes and had experimented with ingredients and methods in order to replicate candies and other sweet treats from throughout history.  The store was arranged chronologically so it was like a timeline of sweeties.  There was marshmallow root that would have been snarfled up by the ancient Egyptians but most of the goodies dated from the 1700s onwards.  I actually felt pretty nostalgic in the 20th Century section.  Even though I didn’t live through most of that century, my Gran used to take me to an old fashioned sweet shop in Edinburgh so I was familiar with sweet traditions older than me, tastes from bygone eras.  We each picked out a bag of sweeties by way of a souvenir of our day and look forward to sampling them and using our tongues and tummies to travel through time. 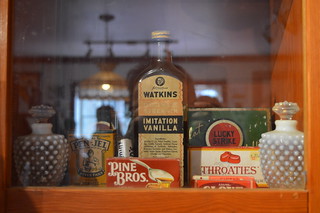 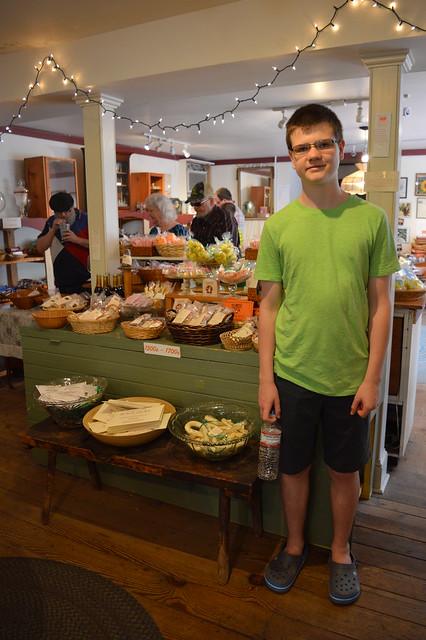 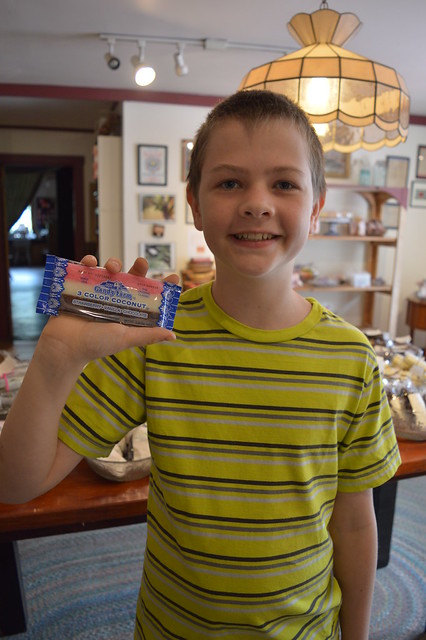 Mr Pict and the 11 year old hopped on the shuttle bus to go and retrieve our car.  Meanwhile, the three other kids and I decided we would walk along the canal side.  It was a pleasant walk – though we did have to tread carefully since there was goose poop and squelchy mud everywhere – and very peaceful since few people were walking that stretch.  The stroll afforded us the opportunity to see more of the industrial ruins of the town.  I would have liked to have crossed over the bridge to Virginius Island to see the ruins there but we were short on time so that will have to wait for a future visit.  The kids were more excited about our wildlife encounters along the Shenandoah Canal.  We saw loads of geese with their fluffy goslings swimming around in the algae covered water and there were turtles sunbathing on branches jutting out above the surface of the water.  The walk was a restful way to end our trip to Harpers Ferry. 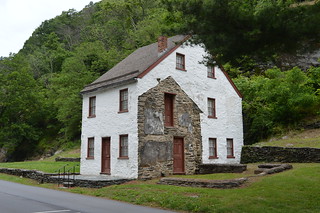 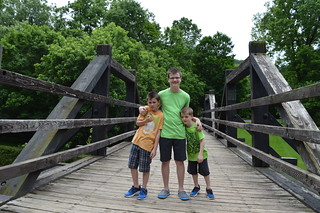