On each morning of our vacation, we breakfasted in our hotel.  It was included in the room price but also made sense in terms of logistics in time, allowing us to just munch and go.  Hotel breakfasts can often be a bit limp, especially for me given that I don’t eat red meat, but this breakfast was incredible.  It was a buffet of Mexican and European foods, patisserie, an omelette station, a wide variety of fresh fruits and even some Japanese food.  When I am often stuck just eating scrambled egg on toast, there was a cornucopia of vegetarian food for me to sample and devour.  Even the scrambled eggs were superb, creamy and light.  The refried beans were the best I have ever had.  Mr Pict was also delighted to discover that the sausages being served were just like British bangers.  The waiter service was always superb.  Indeed the waiters were like ninjas, bringing glasses of fresh orange juice before I even knew I needed another, replacing clean cutlery in the blink of an eye.  On a practical rather than gastronomic level, the benefit of having feasted on such a wonderful breakfast was that we never needed to eat again – not even a snack – until late evening and that meant we never had to factor in meal times when we went out on excursions.

The destination for our first full day in Yucatan was Chichen Itza.  We hopped in the car, headed onto the toll road, and in no time at all we had left buildings behind and were flanked by lush, verdant jungle on both sides of the road.  With nothing but foliage to view over such a long distance, I cannot say it was the most exciting journey I have ever undertaken.  There was very little to see between Cancun and Chichen Itza.  Indeed signs warned that there was over a hundred kilometres to the next petrol station and exits were few and far between.  One thing we did note were dozens of men scattered along the road who were pedalling bikes with large baskets on the front, somewhat reminiscent of butcher’s boys.  We could not figure out where they were coming from or going to and many of them were even cycling in the wrong direction on the road.  We did spot a serried row of riderless bicycles at one point, their baskets filled with wood.  We assumed, therefore, that the men were pedalling hither and yon in order to gather the wood and that the collected piles of woods were then awaiting collection  by motorised vehicle.

I am not sure how many UNESCO World Heritage sites I have been to (certainly not enough!) but I was very excited to be adding to my “collection” by visiting Chichen Itza.  Mr Pict had been a quarter of a century before and found the place transformed, with the ruins now much more protected from the thousands of daily visitors and with much improved facilities.  Chichen Itza is the area’s most famous and perhaps even Mexico’s most famous Mayan archaeological site.  It dates from 600-1200 AD so is quite late as prehispanic settlements go.  Indeed, people were still living there when the Spanish arrived.  It was also apparently a culturally diverse city which accounts for its range of architectural styles.

Tickets purchased, we stepped through the turnstile, took a few steps along the path and I was instantly wowed: my first view was of the massive 98 feet high El Castillo pyramid which actually dominates just about every view in Chichen Itza.  Mr Pict had climbed the pyramid – back in the day when preservation was apparently less of a concern – and I was rather glad that ascending and descending the steep steps was no longer permitted not only from a conservation perspective but also because I would have had a panic attack part way up.  Even standing at the bottom of the steps and looking upwards made me feel a little wobbly.  Those Mayans must have been hardy folk to not have suffered jelly knees.  The temple being dedicated to the plumed serpent god Kukulkan, the steep stairs had pairs of feathered snakes at their bases.  Apparently when the sun hits the stairs at certain angles, the serpentine effect becomes emphatic.  Maybe those served as a warning that danger awaited anyone who even thought about rushing up and down those stairs. 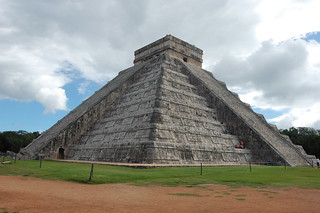 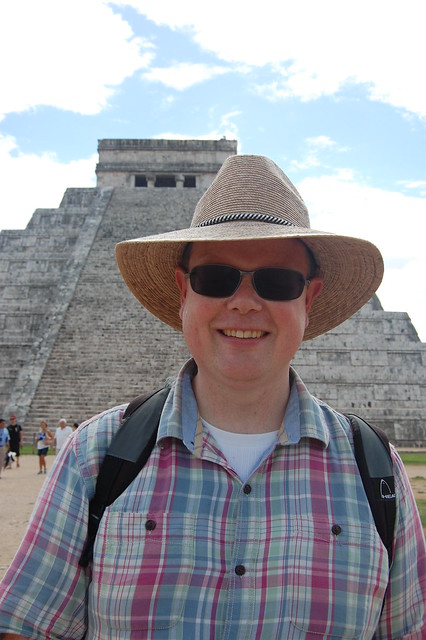 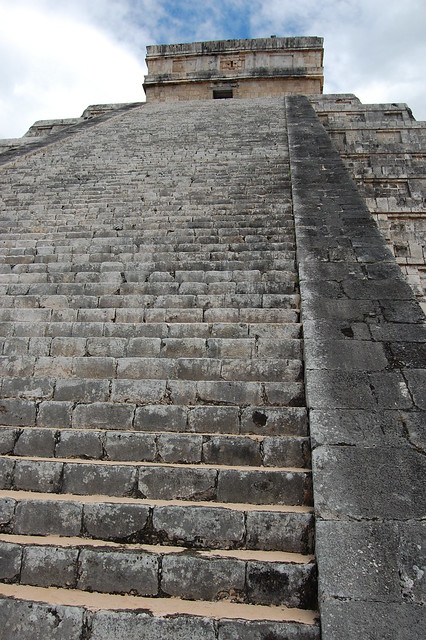 We started with the ball court which was one of my absolute highlights of the day.  It is one of at least a dozen ball courts on the site but is by far the best preserved and is indeed the largest Mayan ball court in existence.  Before seeing it for myself, I had not appreciated the vast scale of the Chichen Itza ball court nor how high the goal rings are.  An interpretive board explained that it was unlikely that the tradition goal scoring rules of hitting the ball with the hip were followed at Chichen Itza because of the height of the rings but I have no idea how they managed since they struck me as being even rather high for basketball style hoop shooting.  There are temples at either end of the huge ball court but it was the court walls that were the most fascinating and engaging.  The carvings were hugely impressive, retaining such crisp detail after millennia exposed to the elements.  There were friezes depicting male figures, their costumes and expressions vivid in the stone, and a border of a scaled snakes body concluding in a large head.  My favourite carving depicted a ball player being decapitated, the spurting blood transformed into undulating snakes.  It was the winners who were sacrificed, it being some sort of honour to be chosen to appease the gods.  Since I was always very rubbish at sport, at least I would have been safer as a Mayan.  Chubby and unhealthy maybe but a least with my head attached. 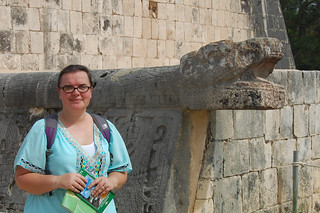 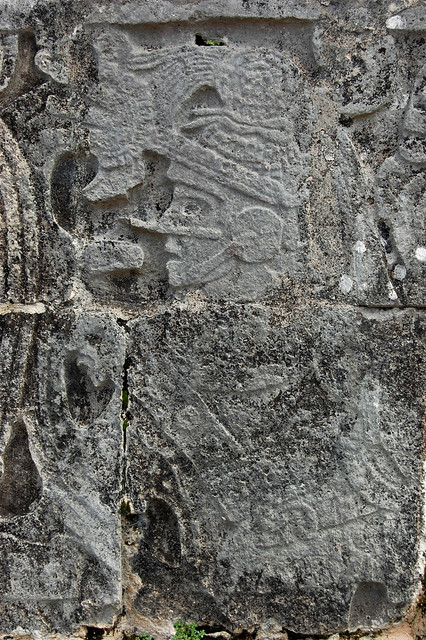 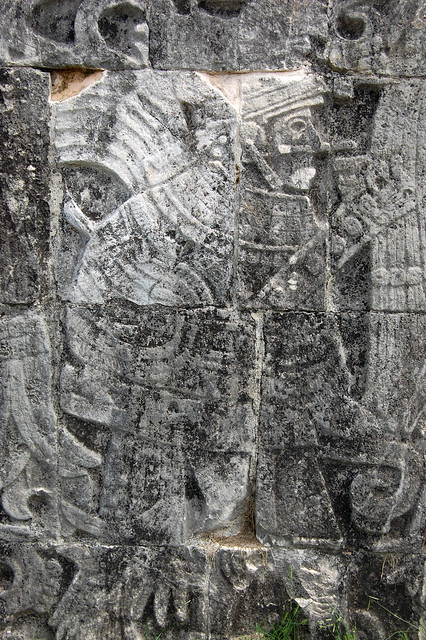 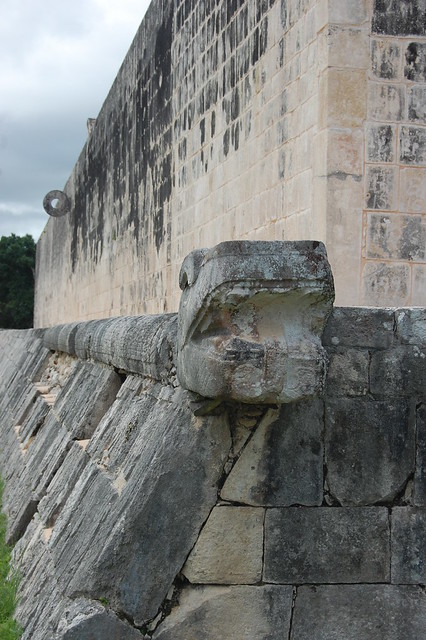 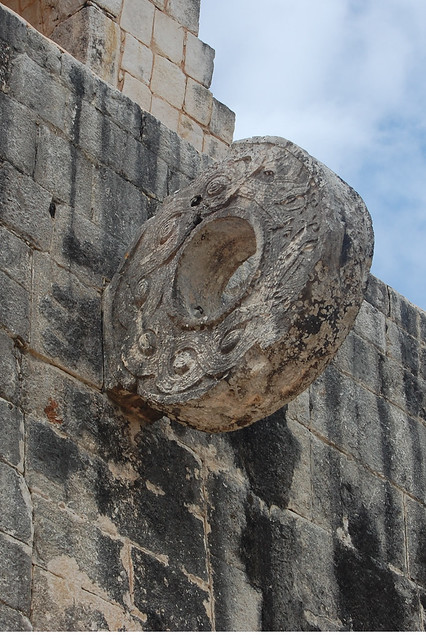 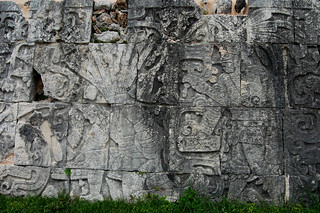 I was also rather taken with a stone platform that had edges carved in row upon row of skulls – sometimes referred to as a tzompantli.  There was some speculation that it might have been connected to human sacrifice – I overheard one guide saying that it was probable and another saying that it was highly unlikely – but given the carvings in the ball court I think it was rather more likely that the former was true and that human heads were displayed on the platform.  There was also a smaller pyramid or temple that had carvings of pumas on its four sides.  I found those carvings to be rather delightful as there was something of the pose of a domestic cat in the angle of the shoulders and the tilt of the head of the large cat.  Of course, this moggy was munching on a human heart which most pets don’t do. 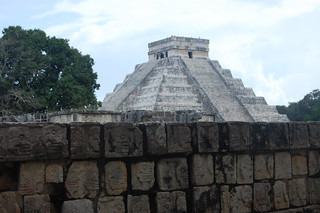 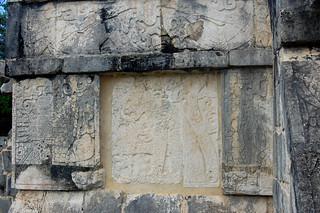 Apart from the ball court, my favourite buildings in Chichen Itza were the group known as La Iglesia – the church – and Las Monjas – or nunnery.  They were off the beaten track a bit and were, therefore, more closely surrounded by trees and plants.  What made them especially spectacular, however, were the amazing carvings: hieroglyphs, geometric shapes, long-nosed gargoyles, and gods.  I also liked the El Caracol, known as the observatory.  It contains a spiral staircase, which gives it its name, and is topped by a dome at the top that did indeed make it very reminiscent of modern observatories.  Annoyingly the path that leads out to old Chichen was blocked off to visitors on the day of our visit.  That was a pity since the names of the buildings – involving as they did phalluses, turtles and monkeys – made that site a very intriguing prospect. 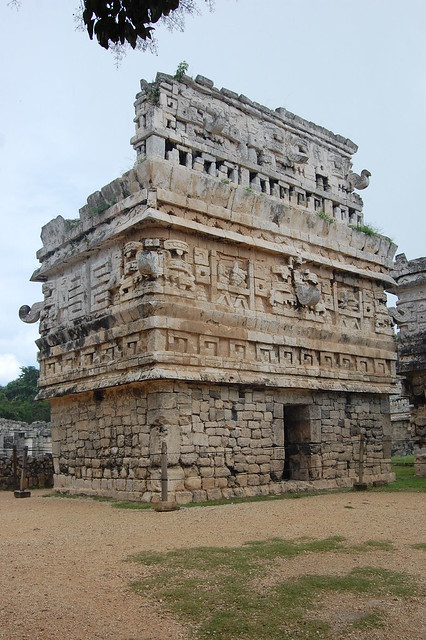 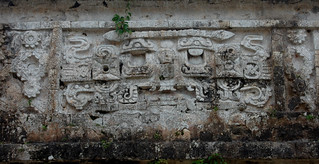 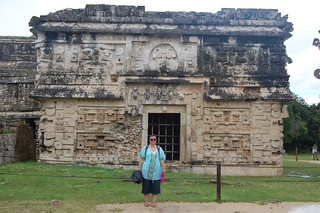 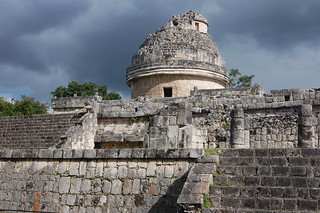 The paths that circled the central “plaza” at Chichen Itza were lined with local people selling crafts and souvenirs.  On the walk out to the Sacred Cenote – where the community had made sacrifices during droughts – we were able to see quite a few of the men sitting carving the wood and women sitting in the shade of trees sewing fine stitches into fabric.  So omnipresent were the stalls, however, that the soundtrack to our visit to Chichen Itza became the promotional cries of the stallholders and the ever present growl of puma ocarinas they were selling all layered on top of the weird laser noise of tour guides relentlessly clapping to demonstrate the site’s weird acoustics. 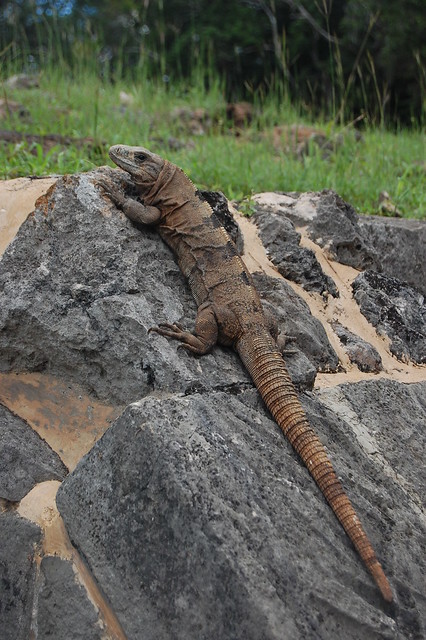 We absolutely loved our visit to Chichen Itza.  It was an incredible place full of fascinating archaeology and architecture, wonderful carvings, and intriguing details, and the visit left me itching to learn more about the ancient Mayans and what everyday life was like for them.