This was the other illustration I created while tuned into professional development workshops. It is possible that Deer Girl was a bit of a warm up because this drawing developed so easily by comparison with barely any erasing. I have a definite preference for drawing female figures so I challenged myself to draw a male character and to draw a face in profile. I am actually really pleased with the result. My Inner Critic is actually really subdued in response to this illustration.

My Rainbow Art Journal has segued out of its initial black stage into a red phase, as you may have observed.  I knew that somewhere in this section an interpretation of Little Red Riding Hood would appear because she and the wolf are characters who have cropped up time and time again in my art work over the years.  There is a definite connection in terms of palette and pattern between this new painting and a previous art journal page from 2015 but stylistically they are quite different.

I don’t know why I have always been drawn to Red Riding Hood as a fairytale because I was so wee when my moderate obsession started.  I do like wolves, love werewolves, and the psychological possibilities of the story of a girl journeying into the wilderness to confront and overcome a dangerous aspect of that wilderness.  With this art journal page, I wanted to depict the idea of the innocent girl and the bestial, primal wolf being interconnected, almost like a yin-yang balance.  That gave me the idea for the composition.  I actually thought to take some process shots as I worked on the double page spread over the course of a couple of weeks.  From the basic sketch, I then blocked in large areas of colour using acrylic paint.  I find that getting that one layer down really helps me as it creates a uniform surface on which to build additional layers and use a wider variety of media and it also immediately eliminates the white page so that I can more easily push some areas into the background while bringing other areas forward for emphasis.  It was then just a case of working away on the piece in little rations and gobbets of time, building up the tones and details.  I think of all of the Red Riding Hood pieces I have ever created, this is my favourite so far. 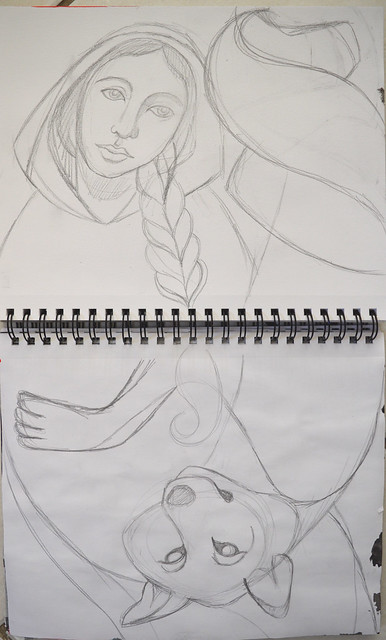 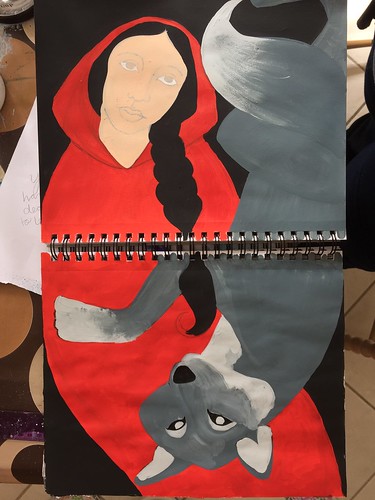 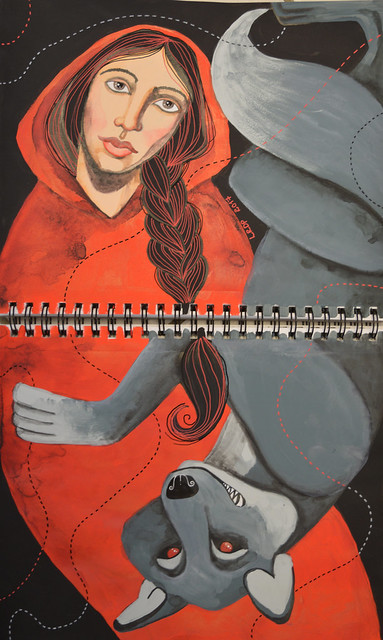 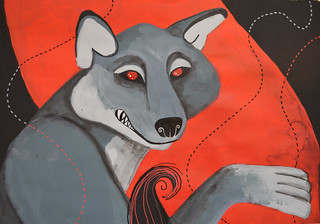 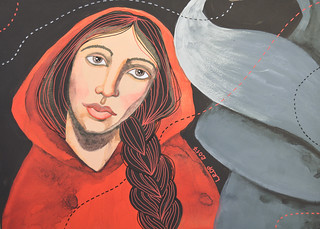 This week’s Life Book lesson was taken by Tamara Laporte and demonstrated a paint over collage technique.  The subject of the painting was to be a figure with an animal and we were encouraged to choose an animal companion that reflected an aspect of ourselves (I think – I skipped that bit of the lesson).  Laporte’s exemplar depicted a wolf and as soon as I saw that I had a notion to paint Red Riding Hood and the Wolf.  For some reason, that is a subject I return to time and again with my art.  I have even shared a couple of examples on my blog, one in my art journal and one in an altered book.

My collage layer was a bit of a mess and I was not altogether happy with the scale of the wolf but my oldest son needed to use the computer so I had to use the picture I had already printed out.  It was not as if I was aiming for realism anyway. 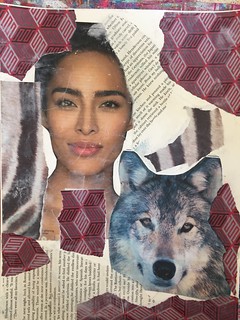 For some reason, whenever I paint over a collaged face, the chin and jaw always ends up too heavy.  So odd.  Indeed, I think the only trace of the original image is the eyes and the lips.  The Wolf also ended up looking a bit smiley.  I don’t think he was intimidating Little Red Riding Hood or anyone else on the path through the woods. Incidentally, the moon disc behind the figures is silver.  It just does not photograph well and looks flat grey.  I have definitely done better paintings over collage in the past but, ho hum, another lesson ticked off the list nevertheless. 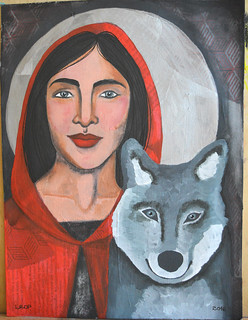 This week’s Documented Life Project prompt was to use tissue paper.  The idea of using tissue paper in mixed media art projects is that much of the tissue disappears when it is adhered to the substrate so that only the chosen image remains prominent and the rest of the tissue becomes a background layer.  Tissue paper is not something I have used in my art work and it is not something I own.  I improvised with what I did have which was some tissue paper used for wrapping Christmas gifts.  It is not thin enough to disappear but I thought it would “make do”.

As the tissue paper was red, the idea of Little Red Riding Hood came to mind.  I created the clothing and cloak for Little Red out of the tissue paper and used acrylic paint and paint pen for the rest of the page.  I like to work with a limited palette so I stuck to red, black and white for this page.  It, therefore, annoys me that I mixed the black and white to make the wolf grey; I should have kept the wolf black to make the whole page more cohesive.  My stencilling also annoys me as I continue to be too heavy handed and messy with it.  Overall, however, I am happy with how this page turned out and my kids – who are my biggest cheerleaders – love the page so I guess this art journal page qualifies as a success. 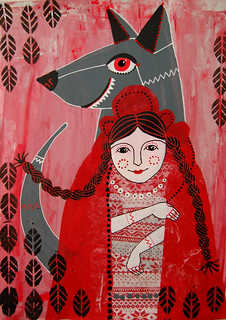 PS If you enjoy seeing my art projects, you might be interested to know that I have embarked on another one which I am sharing over on my art blog.  I am altering a recipe book by painting monsters on the pages.