It was time to introduce the boys to the Impressionists in the next leg of our History of Art project.  The boys were already familiar with Monet which made him an easy choice as an exemplar of the Impressionist movement.  We discussed what about their style and approach to painting had made the Impressionists so provocative and we looked at examples of Monet’s paintings from throughout his life.

The boys were most familiar with Monet’s water lily paintings so most plumped to use that subject as the foundation of their own art work.  I think it is fair to say that, apart from the youngest, the kids are taking the path of least resistance when it comes to their creative responses to this project.  There’s a lot of minimal effort going on and a resistance to trying new ideas or materials.  I stated from the beginning that I was not going to force them to adopt a particular approach but I need to increase my degree of encouragement.

My oldest, of course, had to Minecraftify his drawing.  There is, therefore, some kind of blocky squid swimming around in the lily pond. 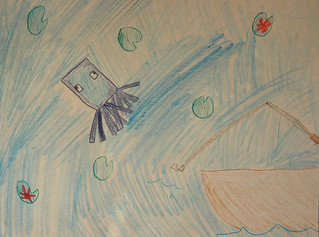 My 8 year old drew a lily pad and flower, at least using marks in different shades of pencil to mimic the brush strokes of Monet but completely resistant to painting. 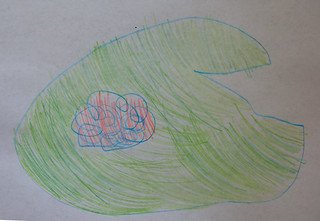 My 9 year old decided to draw a field of poppies, again using coloured pencil.  He is determined to only draw and not attempt any other medium. 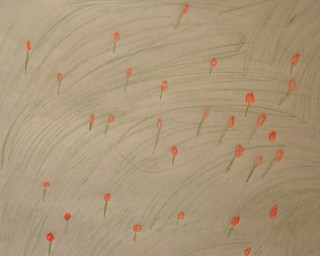 My 6 year old wanted to make a lily pad in three dimensions.  He, therefore, started by painting on some brown paper bags.  Once the paint had dried, he cut out petal shapes from one painted bag and a lily pads shape from the other.  He then used a split pin to connect the pieces and I helped him roll the edges of the petals around a pencil so that they would curl. 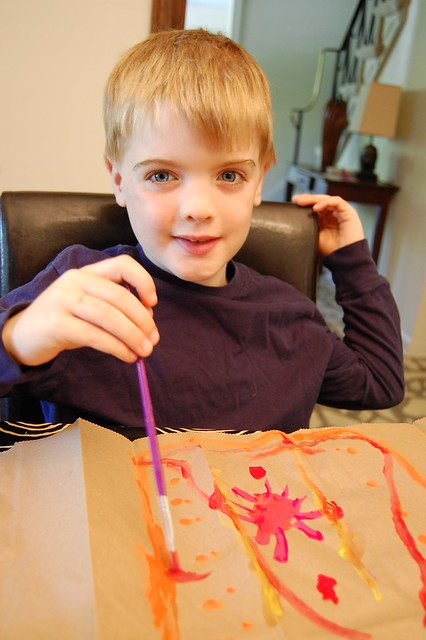 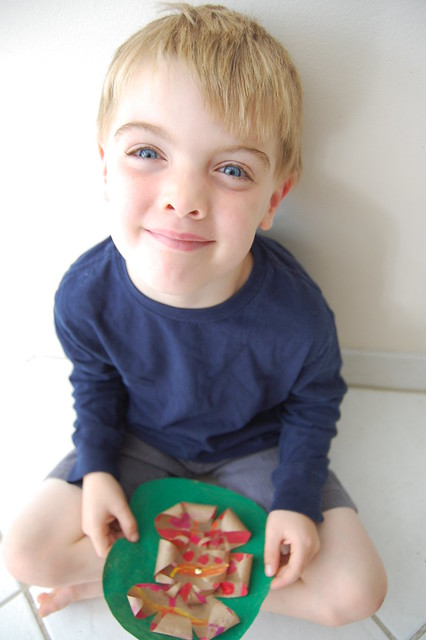 He also created a lily pad using some of his Gogo toys and a toy frog. 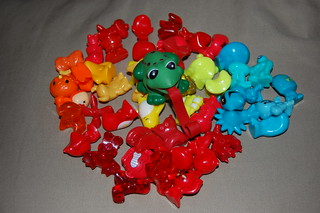 Since I am committed to sharing my art fails as well as my art successes, I will pull on my big girl pants and share my completely rubbish response to the Monet lesson.  I decided to set myself the challenge of creating an abstracted water lily image using Dylusion spray inks and crayon for an experiment in wax resistance.  It went horribly wrong.  The ink colours bled below the dividing line which undermined the composition and the colours to represent water and the plants were not strong enough.  I wet the paper in advance to using the inks hoping it would help them spread and look more liquid but instead it just diluted the pigment.  Pants.  Complete and utter pants.  I could have tried to rescue the piece but I was out of time and I also didn’t want to waste valuable resources by investing them in a piece that was already in rigor mortis. Lessons were learned. 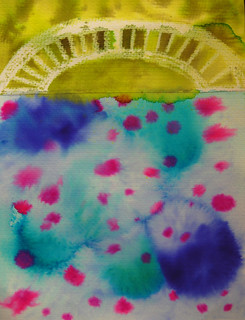 You can see my Monet Crazy Critter over on my art blog.