I voted early this morning.

I was so excited and enthusiastic.  I literally squealed when I saw my name and signature in the electoral register.  I had had nightmares about my name not being in there because I became a citizen and registered so recently and was all prepared for requesting a provisional ballot.  Turns out the admin for voting runs more smoothly than most American bureaucracies I have had to deal with.

Five years of living in a country while not enfranchised to vote has been stressful.  I am raising my kids here and I pay taxes here and I intend to stay here so I am invested in this country.  Today I was relieved to be able to exercise my right and responsibility as a US citizen. 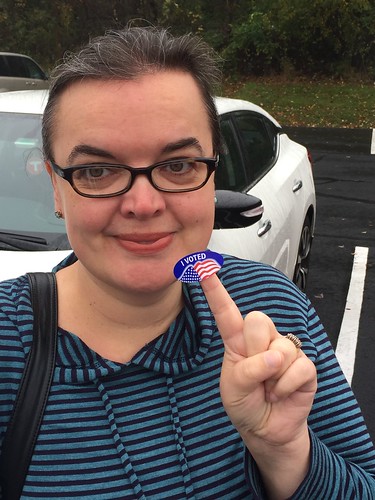 My youngest son’s preschool is serving as a polling station today.  At both drop off and pick up I was asked if I was there to vote and both times I explained that, sadly no, as an immigrant I was not entitled to vote.  This is a difficult thing for me.

My Gran was intensely, fervently, obsessively political.  She had stridently held opinions on every subject and she was politically active in trying to change the things she believed needed to be changed.  Some of my happiest childhood memories of time spent with her involve being at protests and on rallies.  I suppose, therefore, that I learned to be politically engaged at her knee.  My family taught me early on how important it was to actively participate in democracy, that to not cast a vote is to undermine the very principle of democracy, to inform yourself and to cast your vote accordingly.  People fought and died to earn me the right to vote and I should wield that right and be thankful for it.  In due course, I registered to vote as soon as I was old enough to do so and cast my first vote as soon as I was able.  In my entire adult life, I have only failed to vote once – in a local election because I was in hospital having a baby.  I think that might be a reasonable excuse, maybe even one my Gran would have permitted.

When my husband and I were discussing the pros and cons of moving from Scotland to America, therefore, one of the items on the list was the fact I would not be able to vote.  I would be abiding by and controlled by the laws of and paying the taxes to a country I had no electoral power in.  As a resident and especially as the mother of four children, I would have a stake in a country but would have no political voice.  That was a Big Deal for me.  It became part of my difficulty with feeling like a Non-Person upon arriving here.  Like my Gran, I have passionately held views and opinions, values and beliefs, and it is frustrating to not be able to invest those in moulding the future of a state and nation I am now raising my children in.

I am very liberal and left wing.  I am a socialist who believes to the core of my being that the haves and the cans have a moral obligation and a social duty to support and protect those who have not and who can’t.  I am against capital punishment, for equal rights across the board, pro gun control … an endless list of issues on which my new homeland and I are somewhat out of synch.  Right now I have no ability to shape the laws in regard to any of these core issues.  When it comes down to brass tacks, I cannot even vote for the local dog catcher let alone who nominally represents me in Congress, the Senate or the White House.

If and when I take up US Citizenship, it will primarily be motivated by my desire to vote, to participate fully in the democratic process once more, to have my say in a country I now have an important stake in.  For now, however, I just have to hope that the winds of change and the franchise being taken up by each new generation might move things along in a direction that more accords with my stance on key issues.  On that note, today a Federal judge struck down Pennsylvania’s ban on same sex marriage.  That I now live in a state that recognises marriage equality makes me very happy indeed and gives me hope in more ways than one.  Today, therefore, at least feels like an easier day on which to be disenfranchised.