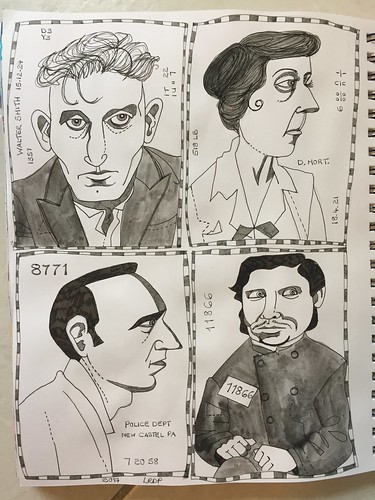 Having decided to pick out two lessons to “catch up” on missed art lessons, the second one I picked was another Life Book lesson.  I wanted to tackle this one as the layering and creation of texture would present me with challenge and, therefore, learning opportunities but the inclusion of figures meant it was a subject (unlike florals) that automatically appealed to me.

The lesson was by Gillian Lee Smith and I really enjoyed her approach to building up layers and balancing out dark and light elements throughout that process.  Once I got the background to a level of grunginess I was happy with – and I used shades of brown for a sort of vintage, sepia feel – it was time to work on the figures.  I did not have the materials required for the method Smith demonstrated so I had to improvise.  I also decided not to incorporate more than one figure and just focus on one face.  I think it was the whole sepia tone thing as it made me think of a carte de visite photographic portrait.  I really enjoyed the process of pulling the figure out from the background through use of light and shadow, white paint and black ink.  I am not overly keen on the outcome – she looks a bit spectral to me, like something you might find hanging on the wall of a haunted house – but I really did like the process and felt I learned quite a bit from it.  Something to return to in future and try again. 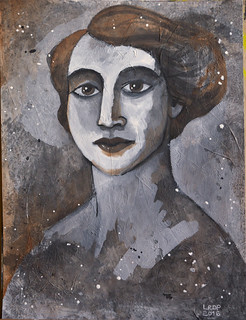