This week’s Documented Life Project prompt was to use paint and to document “How do I face my biggest challenge?”

It took me a long time to ponder the subject for my page.  I have experienced a wide variety of challenges in my life, from the small to the large, the simple to the complex, the flash-in-the-pan to the long-lived.  My mind was flibber-gibbeting all over the place.  Some ideas I dismissed outright as they were too personal.  Then I had a bit of an epiphany.  I realised there was a common thread to how I overcame all the hurdles and challenges I have faced in life: I just dig deep, tell myself I will overcome as generations have done before me, as others have done in much more difficult contexts, give myself a bit of a shake and get on with it.

I cannot even recall the mental segues I took to get from that thought to the Willendorf Venus but I decided a version of her would be the central image of my journal page.  I used acrylic paint and inktense pencils to create my art journal page.  I then stamped the phrase “I am woman; hear me roar” across the top of the page.  My sons think this journal page is hilarious. 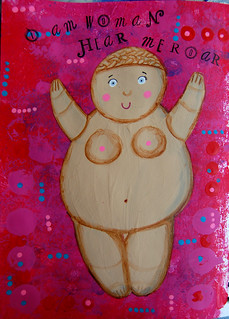 Aphrodite is, of course, the Greek goddess of love, her Roman counterpart being Venus.  In a few versions of her myth, she is one of the many children of Zeus.  In most versions, however, she was created when Cronos castrated Uranus and threw his genitals into the sea.  Aphrodite then arose from the foam and floated ashore in a scallop shell.  It is that version of her creation that has inspired so much art, most famously Botticelli’s Birth of Venus.  I am not sure how Aphrodite would record her ancestry on a family tree.

Famously beautiful and desirable, Aphrodite had many lovers.  Zeus, worried that rivalry for her affections would spark conflict, married her off to the ugly god Hephaestus but that didn’t stop her running around and “love goddessing” with others – most famously Ares.  As well as being unfaithful, Aphrodite could also be pretty twisted and vengeful.  Being the goddess of love apparently does not require you to be lovely.  Her vanity even provoked the Trojan War.  It was she who persuaded Paris to award her the golden apple by rewarding him with the most beautiful mortal woman in the world.  Since Helen was already married, her abduction by Paris led directly to the conflict between the Greeks and the Trojans.

In my drawing of Aphrodite, I wanted to try and capture those dual qualities of the goddess: her seductive charm and her wickedness.  The instant that thought passed across my mind, I thought of the femme fatale trope and that led me to think of film noir.  I decided, therefore, that my Aphrodite would be alluring but dangerous and that I would depict her as looking like an actress from the golden age of cinema, walking the red carpet.  I gave her the long locks of Veronica Lake and the beauty spot of Marilyn Monroe.  I angled her geometric hips to suggest a sexy sashay combined with a sharpness and I painted her dress red to connote passion, lust and danger.