Early evening on the first Sunday in November, we headed to Upper Darby’s historic Tower Theater. The purpose of our visit was to go to the Van Gogh Immersive Experience. We had booked tickets in the Spring hoping we would feel confident enough to attend an indoor event safely. We took the chance and crossed our fingers because Van Gogh is our 16 year old’s favourite artist and the Experience was coming to the Philly area around the time of his birthday.

The first half of the Experience was engaging and interesting. There were three-dimensional objects on which projected images were moving, replicas of Van Gogh’s works, and well-curated information boards. I actually learned a couple of things about Van Gogh that I had not previously known – that he was very possibly colour blind and that the reds in his paintings have disappeared over time because of the degrading of the particular pigment he used. Had this section been the sum total of the Experience, however, I would have been disappointed. It was an attractive and appealing way to present information but would not have justified the ticket price.

The second half of the Experience, however, was utterly mesmerizing. A large room had images being projected on all four walls and on the floor. The changing images told the story of Van Gogh’s life as an artist, conveyed something of his emotional and mental state, and showcased the imagery of his paintings. I thought the almond blossom section was especially aesthetically pleasing while the crows in the wheatfield were emotionally stirring and the Starry Night was evocative.

My husband and two youngest sons plonked themselves in deckchairs and enjoyed the entire show from that vantage point. Our 16 year old loves the movie ‘At Eternity’s Gate’ so he popped in his earbuds and listened to the soundtrack of that film throughout his visit – though there was a lovely soundtrack accompanying the imagery. He was definitely into the “immersive” aspect of our time there. He most certainly did not appreciate me breaking into his bubble to take his photo or talk to him. Meanwhile I chose to wander around and see what things looked like from different perspectives in the room. I also enjoyed looking around the room and seeing the sunflowers and crabs and branches being projected onto the floor flitting across all of the other visitors.

There was an option to extend the “immersion” by doing a virtual reality activity. There was an extra cost involved but it was not too steep. The boys were not keen enough on the idea, however, to want to queue up for a turn plus we were all getting hungry so we did not opt into that. We really enjoyed the Van Gogh Immersive Experience. This type of event was a first for me and I would certainly be keen to visit others with a similar approach. It’s just a different way of engaging in a subject.

Our History of Art summer project moved forward from the Impressionists to the Post-Impressionists and first up was Vincent Van Gogh.  We looked through my book of Van Gogh paintings, exploring the thick brush strokes, the vivid use of colour, the use of fluid line and pattern and we discussed the emotions each work seemed to convey in order to fix the connection between Van Gogh’s style and the Expressionists he influenced.

We all love ‘Starry Night’ so it hogged the limelight for discussion and in terms of inspiring our art work.  While we listened to Don McLean’s song ‘Vincent’, we got busy creating.  My 9 year old used metallic and glitter gel pens to draw a night sky filled with comets, my 8 year old used the same pens to draw a castle with a swirling sky above which he created by painting with his fingers and my 6 year old painted a swirling sky using a brush and then finger painted the yellow stars. 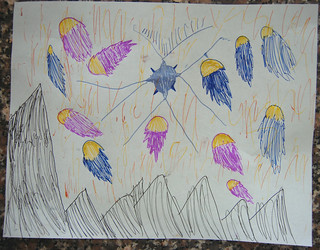 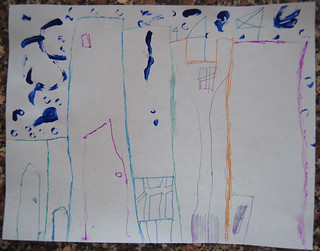 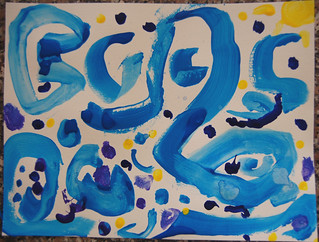 My 12 year old was the only one who took his inspiration from Van Gogh’s flower paintings.  Of course, he had to channel his inspiration via Minecraft.  He also worked on a very small scale to produce his drawing. 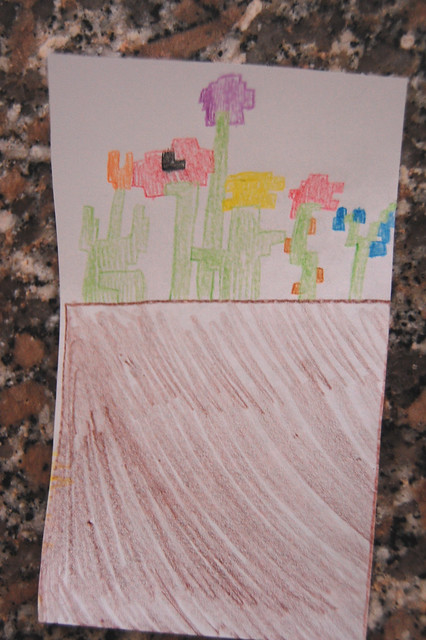 I went with the majority and based my art journal page on ‘Starry Night’.  I decided not to reproduce a landscape or even skyscape but just to use it as inspiration for pattern and colour.  I used various blue acrylic paints, including a pearlescent and a metallic, and then dotted yellow and gold paint for the stars.  The journal page lacks a focal point so it doesn’t necessarily work asthetically but I enjoyed swirling the paint around. 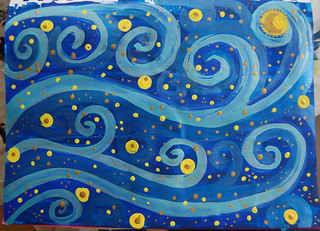 You can hop over to my art blog, Pict Ink, to see my Van Gogh inspired Crazy Critter.