When you think of South Dakota, do you think of the Cold War and missiles?  No.  Me neither.  Mr Pict, however, does.  For that reason, on the day we bade farewell to our temporary log cabin house, we headed to the Minuteman National Historic Site.

Mr Pict and I obviously grew up in the final decades of the Cold War and can remember  pretty terrifying public information films about nuclear holocaust being shown at school.  Our sons, however, don’t have that context or understanding so first port of call was to the Visitors Center.  We handily arrived just as the video was starting.  The kids learned about the use of missiles as a deterrent, about false alarms and close calls, and about “duck and cover” training.  Ultimately the only thing our youngest son could recall about the video was that “Bert the Turtle says Duck and Cover”.  Better than nothing I suppose.  You already know that I am no expert in military history having only the most passing interest in it.  I am, therefore, probably atrociously simplifying things when I write that the Minuteman programme involved constructing silos across the sparsely populated Plains states and having each silo tube house a ballistic missile.  These could be activated by staff at the control facilities.  It must have been boring to man one of these facilities, having to always be on alert while ultimately not doing much each day.  We learned that staff often studied for educational courses or spent their time reading. 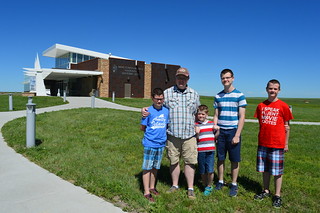 We drove from the Visitor Center to the site of the D-09 missile silo which has been preserved as part of the historic site.  We could look through the glass into the silo below and see the deactivated missile within.  It was weird to imagine thousands of these things dotted across South Dakota and the neighbouring states.  We did not stay long at the site as we were being devoured by vampiric flying insects. 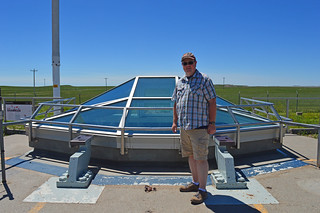 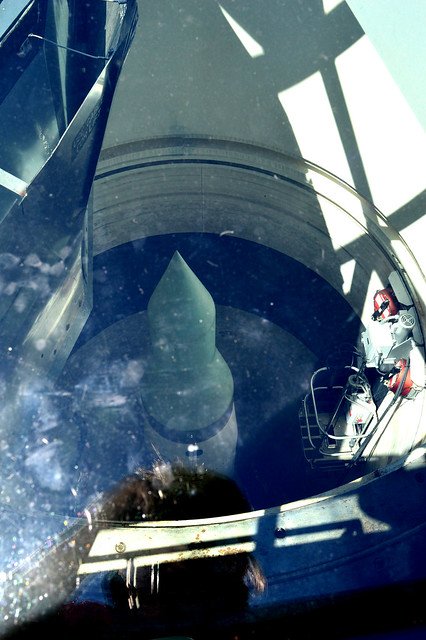 I am a sucker for decay and rust so we took a detour to a small town called Okaton, near Murdo.  While the town still has a population of about 30 people, I had steered us there because it is in large part a ghost town.  Like so many American ghost towns, Okaton’s life and death was determined by the railroad.  The houses were built to accommodate railroad workers and, when the railroad work moved further west, so did the people.  The railroad ceased operating altogether in the 1980s which was really the death knell of the little hamlet.  I did not venture off into the long prairie grass in search of the railroad tracks (see – I’m learning) but I did poke around the decaying, collapsing buildings, and the rusting hulks of old vehicles and rotting agricultural equipment.  I did not risk stepping inside any of the buildings but I did poke my head and camera through doorways and interiors to get a better look.  The abandoned appliances, moth-eaten soft furnishings, and peeling wallpaper were both nostalgic and poignant. 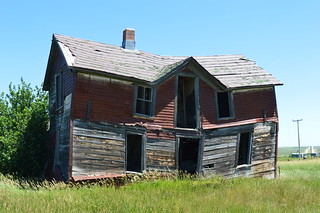 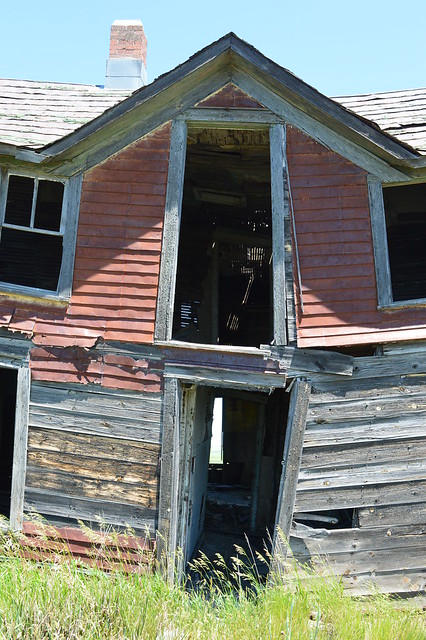 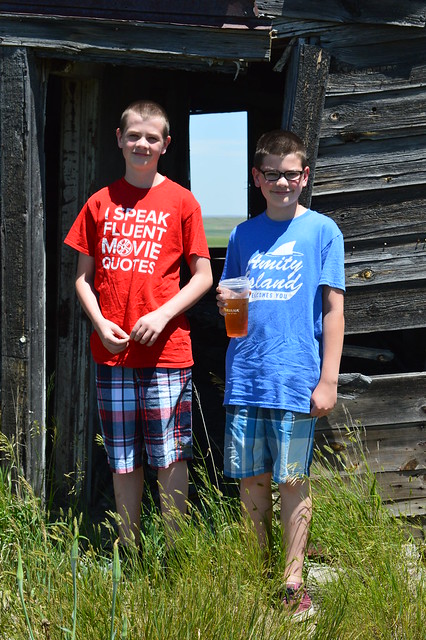 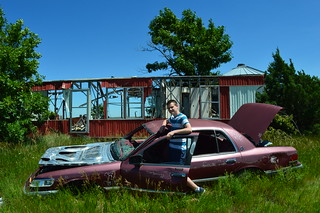 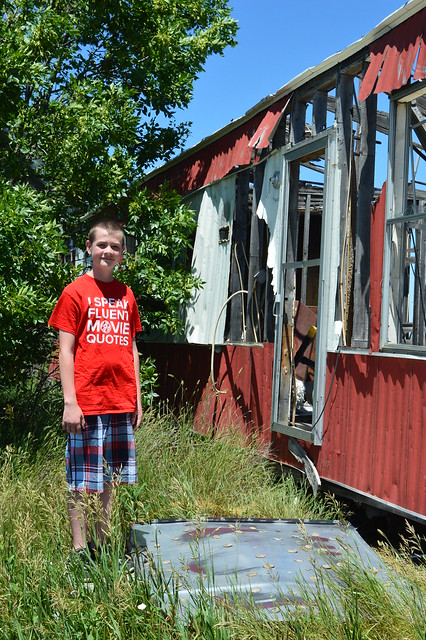 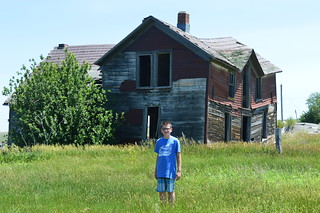 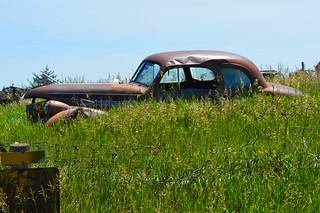 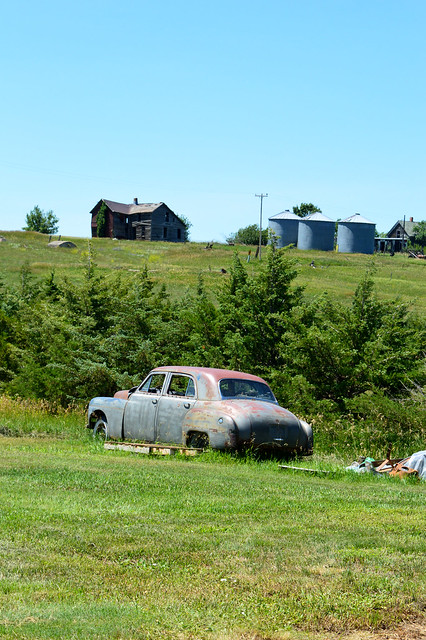 It was mid-afternoon by the time we crossed the state line into Nebraska.  That was state number 37 for me!  Sadly our route was boring and flat.  There was not even any “roadside Americana” to divert me and cause a pit stop or detour.  Our hotel for the evening was in Valentine and, while the room was spacious, it felt weird and somewhat aggravating to be back in confined quarters again.  We could have headed out to see the nearby river or waterfall but the kids were just not feeling it.  Therefore, having not done anything kid-friendly all day, we opted for dinner and a movie.  We ate at the Peppermill restaurant where the food was good and the service excellent.  Nebraska is known for its beef so Mr Pict ordered a steak which he declared to be amazing.  We then went to the tiny, two screen Jewel cinema to see ‘The Incredibles 2’ and the kids then burned off some energy in the hotel pool.  I, therefore, get to claim Nebraska but don’t really feel like I accomplished anything Nebraskan while I was within the state’s boundaries. 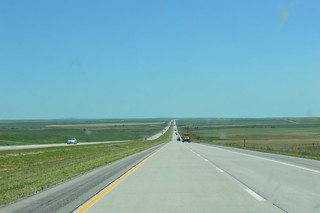 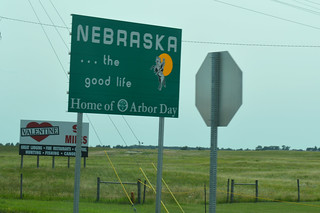 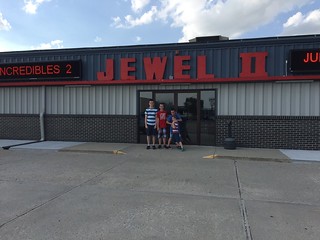 Last week’s Art Journal Adventure prompt was to use text as the initial layer in an art journal spread.  I am not the greatest at layering so it was useful to have the nudge at having another attempt at it.  It happened to be valentine’s week last week so I took “love” as my theme.  My valentine’s week was actually themed around stress – two valentine’s parties to organise and run at work, three class parties to attend that afternoon for three of my kids, and cooking a dinner the kids complained about, and we don’t even celebrate Valentine’s Day – but I decided my art journal page should focus on “love” regardless.

Layer one was my handwriting in ink covering the page, running in multiple directions, overlapping, until it became completely illegible, and all I wrote were whatever love song lyrics happened to drift into my head.  Once that layer was complete, I decided to scrape some acrylic paint over it.  Annoyingly, this all but concealed the handwritten layer.  Ugh.  I just cannot get this layering thing right.  Ploughing on, I decided to reintroduce text again so I used negative space painting with white gesso to carve out the word “love”.  It was all still a bit meh and blah so I picked up a paint pen and scrawled “all you need” across the bottom of the page.  I am going to be happy that I was intuitive about adding an element but I rather suspect it was a wrong move.  The whole page, therefore, is very ho hum.  But that’s OK because, in a crazy busy week, each layer was a moment of calm in a day. 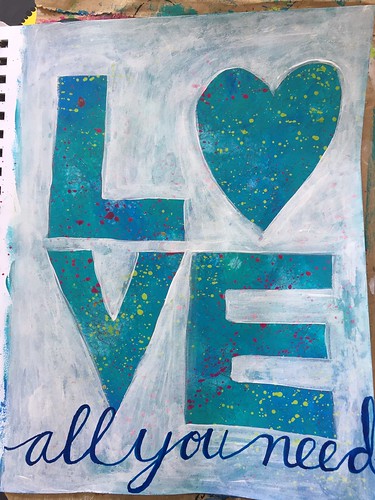 This week’s Documented Life Project prompt was to use “storytelling” as an “underlying fabric” in the art journal.  I was not sure how to deploy either of those things in my art journal in a way that worked for me but I did, however, decide to continue with the overarching theme of using words and text as the predominant element.  Perhaps because the “underlying fabric” aspect of the prompt made me think of layers but mostly because I had been rereading the poetry of Carol Ann Duffy, I arrived at the decision to use her poem ‘Valentine’ on my page.  When I was a High School English Teacher, I taught the poems of Carol Ann Duffy, ‘Valentine’ among them.  It serves as a useful introduction to conceits, given the extended metaphor of the onion for love.

Using a fountain pen and my own handwriting, I wrote the lines of the poem so that they became the layers of an onion.  I then used watercolour to paint in the layers of onion surrounding the text and the “brown paper” skin surrounding it.  It is another time-pushed simple art journal page from me but I am pleased with how well I translated my idea onto the page. 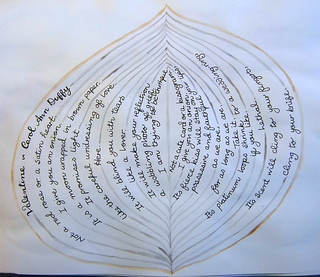 This is my final Documented Life Project page not just of the year but ever.  The project coordinators are taking it in a different direction next year, one that focuses more on the planner than the art journal.  I am, therefore, probably going to use a different set of art journal prompts next year, almost certainly Colour Me Positive which is hosted on another WordPress blog.  I was going to just do my own thing in my art journal all the time but actually the weekly prompt is a welcome nudge for me to do something playful in my journal, experiment, and try new things.  2016 is looking set to be a very busy year for me creatively.