This week’s Art Journal Adventure prompt was Time which was ironic because it took me the entire week to find the time to even sit down at my art table.  I was, however, thinking about the prompt all week and had all sorts of ideas running around in my head.  I initially thought of time travel and HG Wells.  My 9 year old Steampunk fan was very keen on that idea but just the thought of drawing all sorts of cogs and gizmos made me feel stressed.  After that, I had all sorts of different ideas.  It was, however, a chat with a friend about our shared love of ‘Blackadder’ that led to what finally appeared on my journal page.  The idea of taking a character and plonking them in different periods of history combined with my habit of drawing funny bunnies.  I decided to limit myself to eight drawings and to European history so that it did not become a crazily big project.  Once I had the idea and some time at my art table, I was able to whip through the illustrations really quickly as they are just ink and watercolour.  I chose to depict a bunny as a neanderthal, Roman, Viking, in a Medieval costume complete with codpiece, as an Elizabethan with a large ruff, as a Regency dandy, as a Victorian gent, and as a World War One Tommy. 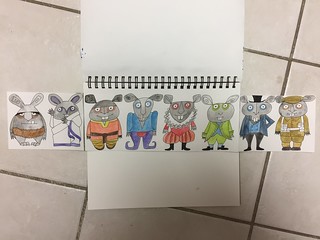 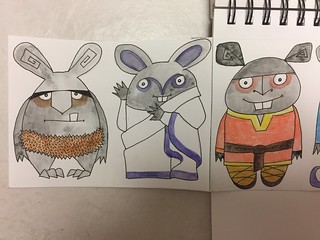 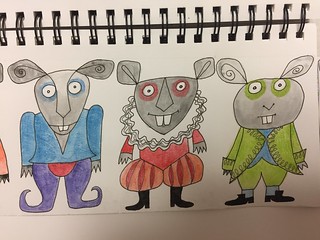 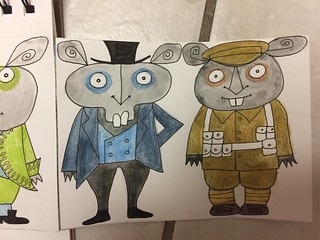