My Inktober sketchbook seems to be filling up with my favourite movie monsters.  I guess I am combining two of my passions: art and cinema.  ‘Beetlejuice’ is another favourite of mine.  I love the style of it and how anarchic it is, the way it plays with the idea of haunting, and the vividly kooky vision of the afterlife.  I decided to draw the scene where Beetlejuice is forcing Lydia into marriage.  I think the characters are recognisable even though neither drawing looks remotely like the actors.  I fiddled and fidgeted and fussed over Beetlejuice’s mouth but I just could not get the shape right for it to look like that tight but toothsome thing that Michael Keaton does with his mouth.  I added a sand snake not just to somewhat frame the characters and fill a blank space but also because I wanted to get some of Tim Burton’s black and white stripes into the illustration given that I had decided to draw Beetlejuice in his wedding garb rather than his striped suit. 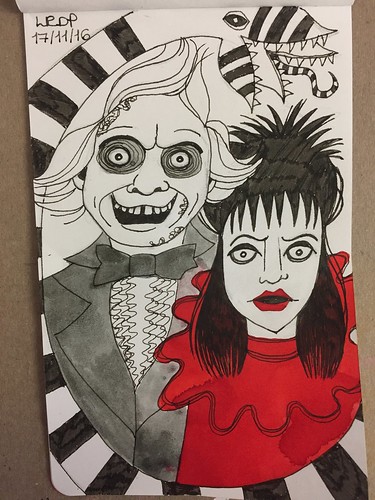