You have not entered a time warp.  It is indeed November which means that it is no longer October or Inktober.  Regardless, I am extending Inktober by a few days.  I had a conflict between two different aspects of my control freakery –  on the one hand, Inktober should only last the 31 days of the month and then be done, dusted, completed; but, on the other hand, I had a partially complete sketchbook that I did not want to leave blank or repurpose for some other drawings because that would be too mentally messy for me.  The solution, therefore, was to extend the regular ink drawing practice of Inktober into November just long enough to fill the sketchbook with illustrations on the same theme – things spooky, horrible, monstrous, or gothic.  I may not draw daily since there is nothing compelling me to do so but if I get the chance to draw when supping my morning cuppa then that is what I shall do.

First up in this Inktober extension was a portrait of the Munster parents, Lily and Herman.  I loved ‘The Munsters’ when I was a kid.  Because I loved the classic Universal monster movies, I loved watching a show that depicted these classic monsters all living together as a family, along with freakishly normal sister Marilyn.  I have tried to convince my kids to watch episodes from the show but so far they are not biting.  I think my Herman could stand to look more goofy because he looks a bit sneering instead of lovably dorky.  For a ten minute drawing, however, it will do the trick. 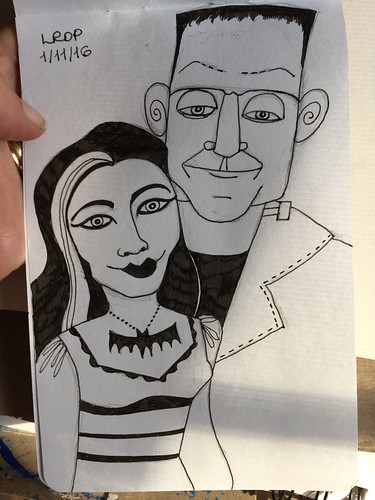 Have you watched the Netflix show ‘Stranger Things’?  I.  Loved.  It.  My husband and I did the parents-of-four-kids equivalent of binge watching it by watching it on successive nights, sometimes even two episodes in one night, because we found it so compelling.  It was one of the best TV shows I have watched in ages.  I loved all of the references to shows and movies I loved from the 1980s, from ‘The Goonies’ to ‘Aliens’, thought the performances were top-notch, especially the group of child actors who pretty much carried the show, and thought the whole thing was just very tight with no flab.  I watch too many shows or movies that would have benefited from at least one more redraft but ‘Stranger Things’ was not one of them.  My favourite characters in the show were Barb and Eleven.  Eleven in particular is a fantastic character and I was impressed with what the young actor portraying her could convey with very little dialogue because her facial acting was great.  Yup, Eleven was a pretty kick-arse character and, going prompt-free again, I decided to draw her in my book today as my fifth Inktober drawing.  Sadly when I showed this drawing to my husband he had to ask me who it was despite him having glut watched the show with me.  Oh dear.  I guess I failed somewhere then.  Anyway, here it is  – still wet off the press because I literally just drew it between supervising homework and getting dinner prepped. 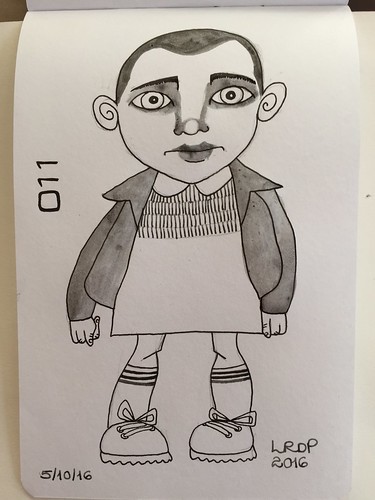 As of this past Saturday, I have now officially missed out on the Eurovision Song Contest for the first time in my life.

Watching Eurovision was a tradition in my household growing up, a tradition I then introduced Mr Pict to and which became part of our calendar as a couple and a tradition that then grew to include our children once they were old enough to stay up late on a Saturday night.  Therefore, what I am really missing is the loss of one of our deeply ingrained family traditions.

It is possible that if you have always lived outside Europe you have zero idea of what I am even referring to in this blog entry.  Let me clue you in.  The Eurovision Song Contest has been held every year since 1956 and involves member countries submitting a song.  Each song is then performed on one (very long) evening and each member country gets to vote on which they like best which then determines the winner, nominally the most popular song.  The contest was long enough when I was a wee lassie but, with the fall of the Berlin Wall and the subsequent creation of new nations, the number of member states has increased massively in the last quarter of a century so that now they have to hold semi-finals and the voting takes an even more interminably long time.

In the decades before I was born, Eurovision was taken quite seriously.  It was regarded as an honour for a country to win and to then host the next year’s contest and the acts performing the song could have their careers significantly boosted by a win or even an appearance.  Some credible careers – such as Abba – were launched by success at Eurovision.  The joy of Eurovision, however, is that in more recent decades the musical and artistic merit has declined so that the songs are utter drivel, frequently sung out of key and the performances are often bizarre.  It is an absolutely wonderful night of randomly kitsch and camp entertainment.  For most of my life, the BBC’s commentator on the night’s events was the DJ Terry Wogan who would make sarcastic quips as the show progressed and gradually sink into his cups as the voting stretched out before him.  He retired and was replaced by another sardonic Irishman, Graham Norton.  A lot of the pleasure of watching Eurovision was the commentator’s witty put downs reflecting our own view of the show.

Then there is the voting.  There is admittedly not a great deal of merit in any of the songs or performances but merit is rarely how Eurovision is won.  Instead, there are complex political relationships at work which lead to certain countries always awarding top points to the same allies every single year and denying points to countries with which they have fraught relationships, regardless of the quality of effort.  It is actually perfectly possible to predict what some countries will award from the “public voting” each year.  In recent years it has also been the case that some countries have, it is suspected, deliberately thrown the contest because they do not want to win.  Winning involves hosting the following year.  This can be a drain on finances for some and a welcome boost to tourism for others.  If, however, you are like Ireland and have hosted several times then it might be time to submit a song performed by a puppet turkey.  That actually happened.  It is believed that singing in English creates an advantage.  There was a rule for a time that songs had to be sung in each country’s native language but it was determined this unfairly advantaged the English speaking nations since English is the second language of most European countries.  If you have ever sat through Eurovision then you might agree with me that actually it is probably advantageous to sing in the most obscure language and dialect possible so that as few people as possible can understand that the lyrical content is entirely dire.  I also think part of the fun is hearing other languages and it is always a bonus when a country decides to go for a bit of a flourish using an ethnic instrument of some kind- double bonus if done so while wearing some bonkers version of national costume.

Anyway, our  Pict family tradition was to score each country’s performance out of 20 with a maximum of ten marks being awarded for the song, five for the performance and five for the costumes.  As a family that usually meant that there was much discussion surrounding how low the score should be for each song and it also meant it was possible for our top scorers to have sung in a way that emulated a camel belching so long as they had a top drawer performance and some natty costumes.  In recent years we have evolved the tradition of eating nachos in front of the TV while chortling through the musical turns and debating whether the song that made our ears wither deserved even a single point.  Of course, the children also love the fact that they get to stay up late – really quite late indeed – while glutting themselves on telly watching.  There is also an unspoken tradition of seeing who can come up with the most scathing put down or come up with the most witty one liner about a song or performance.   The boys do quite well in that regard.  My apprentices.

Possibly next year I will find the time to investigate if the Eurovision’s website broadcasts the event online in any other way than live.  A Saturday afternoon will never do for Eurovision for one reason or another but watching it “as live” in the evening would be fabulous.  So long as I manage to avoid the news of who the winner is which I singly failed to do this year.  I turned on the BBC World News and learned that 2014’s winner was Austria with a song performed by a pretty drag performer with a beard.  Now that’s Eurovision at its most magnificent!