We actually decorated our oldest son’s bedroom months ago but I forgot that I had been sharing our makeover process on the blog.  He has the smallest bedroom so it was the easiest to tackle.  Having become a teenager since we moved into this house, we also felt his room deserved to have a bit more of a mature look to it.

When we viewed the house, this room was being used not as a bedroom but as an upstairs snug living room.  It was full of chairs and tables and a TV and so looked very cramped.  It also had a mud brown shag pile carpet.  We had the carpet replaced before we moved in to make life easier.  The room was very spartan but provided us with a totally blank canvas.  It has a built-in closet that provides good storage space but we definitely needed more furniture to make the room functional. 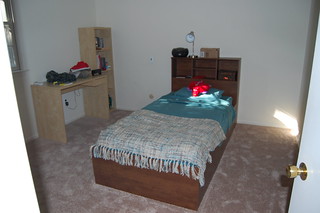 We asked our son what colour he wanted his walls to be painted and he said black.  The compromise was a deep charcoal grey.  While moving furniture around in order to paint the walls, his bed collapsed and broke beyond repair.  Happily, the previous owners had left a nearly new double bed in the basement so we dragged that up to his bedroom.  He was thrilled to have such a large bed to himself.  His younger brothers were warned to not even think about breaking their beds in order to get bigger beds. We also installed additional furniture to store all of his stuff, especially all of his school and stationery materials.  We had these great quality shelves that had been in our formal living room so we put those on our son’s wall above his bed so that he could display his collection of Funko Pops and other assorted nerdy things. 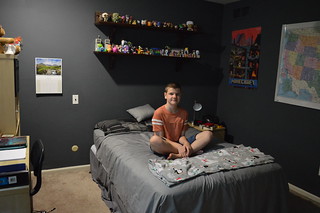 All really simple changes but now he has a bedroom that will last him a good few years.