I had this idea that I should create an illustration of a sun goddess in the yellow section of my art journal.  Once I got started, however, the figure evolved into a pseudo ancient Egyptian woman and the yellow sun ended up golden.  I basically cannot be trusted around metallic paints as I almost always go overboard with them.  There’s so much gold and bronze all over this piece that there is barely any yellow left beyond the background.  Oops. I guess I was still in a Klimty mode after the piece I did a few weeks ago because I ended up creating all sorts of Klimt-esque patterns all over the figure to.  If this is the type of thing that happens when I go with the flow without having a clear plan in mind, I definitely need to leave my control freakery be and let it come up with a vision to work towards. 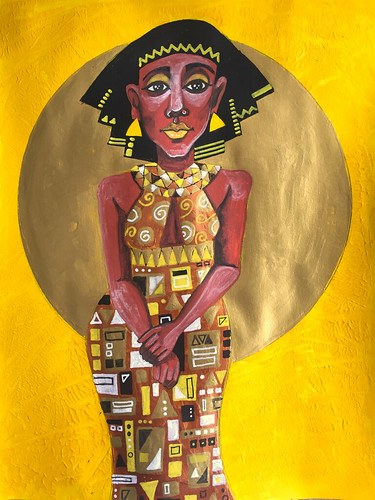 After five weeks, I finally managed to open my art journal and create a page.  This was thanks to me actually being able to go along to my art journal meet up group for the first time in months.  I decided to use the most recent Colour Me Positive art journal prompt as my jumping off point.  The prompt was the theme of “new beginnings”.  There are a lot of ways I could have chosen to interpret that prompt, from the personal to the more expansive and profound.  I chose, however, to think about the regular beats of life, its cycles and rhythms, and the idea of each passing day being a new beginning came to mind.  I decided to illustrate a winter sunrise.  I was actually going to keep the page monochromatic, just shades of black and grey, but one of the other ladies at the meet up suggested I add just a splash of colour to the sun so I added some yellow and orange.  I cannot decide if that was a positive step to take or not.  I think maybe yellow would have looked nice against the greys but not so much the orange.  But such experiments are precisely what an art journal is handy for. 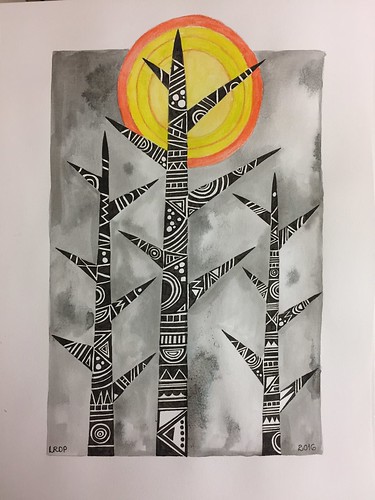 Having drawn Artemis yesterday, I had a strong feeling Apollo – her twin brother – would be up next.  While Artemis was associated with the moon, her brother is the god of the sun.  Among other things in a wide ranging portfolio, Apollo is also, fact fans, the god of plague.  That is something that piques my interest because the history of plagues is one of my nerdy interests.  The odd thing about this particular part of Apollo’s job description is that, as much as he was a bearer of disease and death, he was also the god of healing.  Gives with one hand and takes with the other.

Like his sister, Apollo’s weapon of choice was the bow and arrow.  Indeed, when he was only a few days old, he killed a dragon named Python in order to protect his mother, Leto, as Hera had sent the dragon to kill Leto.  A cheery story involves Apollo and Artemis working together with poisoned arrows.  A queen of Thebes named Niobe claimed she was a better mother than Leto because she had seven sons and seven daughters.  In disproportionate revenge for this rather bizarre slight, Artemis shot all of the daughters and Apollo shot all of the sons.

As tempting as it was to try and find a way to draw Apollo in relation to plague, no ideas formed in my mind.  I, therefore, decided to stick with the sun god route.  I drew Apollo as a bust and placed his head in front of a sun symbol, the triangular rays of which I coloured with my gold ink.  The effect is reminiscent of a halo.  That reminds me that I believe there is a connection between the early iconography of Jesus and depictions of Apollo, the former being influenced by the latter.  It also reminds me that I would love to experiment with using gold leaf (or at least fake gold leaf) in my art at some point.