Last week’s prompt for the Art Journal Adventure was to incorporate a list.  I am a big list maker.  It helps me process things mentally as well as being an organisational tool.  I always have several lists on the go at once.  Most are traditional paper-based lists but I also maintain some as computer files.  I sometimes get a bit control freaky about my lists.  I am one of those people who writes their shopping list according to the different sections of the supermarket – nothing freaky about that obviously since it is just common sense efficiency – but if I accidentally write an item in the wrong area of the list or if I don’t have enough space to neatly add an item into the correct area or if I just make some other sort of error, the handwriting equivalent of a typo, then I have to write my shopping list out again until I have a “fair copy”.  I have sometimes written a shopping list out five times just to get it perfect.

I could have used the evolution of a weekly shopping list as the basis of my art journal page but I am not sure how visually interesting that would have been.  Instead, because I am still focused on travel – since we just got back from our road trip and since my kids are going off, in pairs, on vacation with their grandparents – that was the subject my mind drifted towards.  I decided, therefore, to record a list of the US states I have yet to visit.  It is very much on my bucket list to visit all 50 states.  Mr Pict is actually only missing three (North Dakota, Oklahoma, and Alaska, since you didn’t ask) and maybe for that reason he doesn’t quite get why I am obsessively intent on “collecting” more states.  Upsettingly, before I undertook this journal page, I thought that as of last year’s road trip I had been to 31 states.  However, when I added up the number of unvisited states on the completed page, I had twenty.  What?  That couldn’t be.  I thought I had been on 25 states prior to last year’s road trip where I then added six more but it transpired my base calculation was incorrect.  A previous art journal page had led me to think I was on the half-way mark back then.  Nope.  I had included New Hampshire which I actually have no claim on.  As I have explained before, in order to claim a state I have to have done two of three things within its borders: pee, eat, sleep.  Although I have been in New Hampshire, I did not do two of those three things.  I, therefore, cannot claim it and am reduced to just 30 states visited with 20 left to go.  This art journal page is, therefore, a sort of check list I can return to after future travels around America. 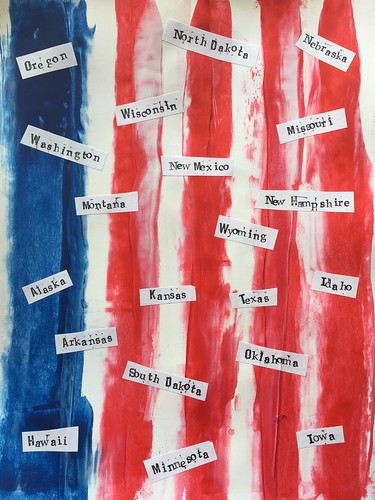 Now I need to devise another road trip that has a route through as many of these states as possible.