While our oldest two sons were still gallivanting in central America with their grandparents, Mr Pict and I decided to take the younger two on a weekend trip to Baltimore.  It takes less time to drive to Baltimore than it used to take us to drive to Glasgow from where we lived in Scotland and that was a journey we used to make just to buy shoes.  Despite its relative proximity, however, we had only visited Baltimore once since we emigrated to America.  It was, therefore, time to go and explore the city a bit more.

First stop was Fort McHenry.  Even if you don’t know much about the War of 1812 (like me!) you will likely know of Fort McHenry through association because it was the defence of that fort that inspired Francis Scott Key to write the ‘Star Spangled Banner’, the rousing song that would later become the national anthem.  Fort McHenry is positioned on Baltimore’s harbour since it was that waterway it was built to protect and it is in the shape of a five pointed star to maximise the vantage points for each bastion.  Built at the close of the 18th Century, the Fort was in constant use by America’s military from then until the end of the First World War.  It is, therefore, a very historic place of national significance.  Want to hazard a guess how thrilled our 8 and 10 year olds were to be there absorbing all of that history?  See if you can spot the point at which they disengaged.

After an introduction in the Visitor Center and the youngest Pictling signing up to do the junior ranger activities, we headed out into the swampy humidity to tour the fort.  There were reenactors demonstrating something about firing cannons and cooking at the fort but the kids had no interest in engaging with any of that so we didn’t pause.  Once inside the thick walls, we found that some young men were demonstrating different drum signals that were used to signal different messages.  I think there might have been one rhythm that was beat out on the drum skin to signal whose turn it was to peel potatoes.  But I may also have just imagined that because I wasn’t paying adequate attention. 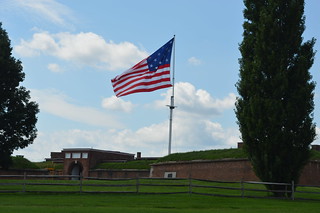 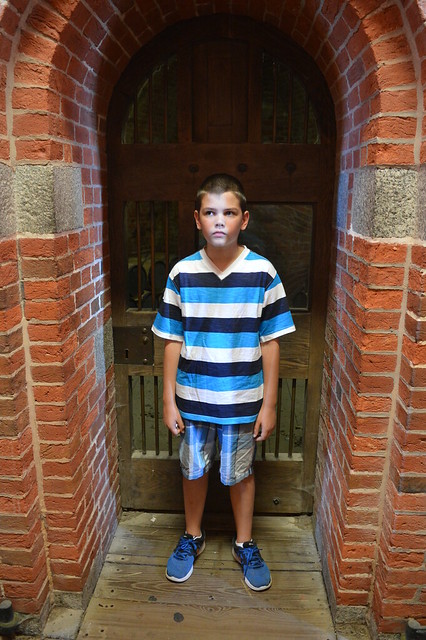 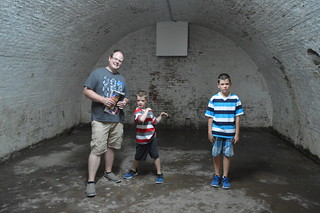 We not only saw a reproduction flag flying above the fort but also saw the original wooden cross brace from the famous defence.  It had been preserved as if it was a religious relic.  I confess that I don’t particularly understand America’s near worship of its flag but, of course, this flag has much more historic significance than most.  It was, therefore, pretty cool to see the crumbly old wood.  The defence of the Fort took place over the 13th and 14th of September and it didn’t really end in a victory for either side.  It was more a withdrawal by the British naval vessels because the great defence of the fort had depleted all of their ammo.  If memory serves, the whole War of 1812 similarly concluded because everyone just sort of gave up and decided to pack it in.  Anyway, the flag that was flying during that 25 hour period of conflict had been sewn by Mary Pickersgill and it was seeing the flag emerge through the smoke the next day that told all the onlookers – including Francis Scott Key – that America had prevailed and still held the Fort.  So that it what the national anthem is all about.  We had taken the boys to see the original Star Spangled Banner way back in 2014 so we were gradually piecing together its history in a scattershot way. 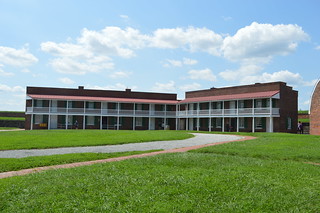 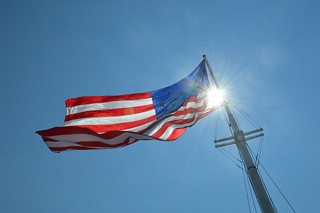 As a Civil War nerd, Mr Pict was much more keen on the Fort’s history from the Civil War era.  During that conflict, the fort had been used as a military prison and some prominent prisoners had been held there.  One building told the story of that period of history and we were able to step inside one of the very pokey jail cells. 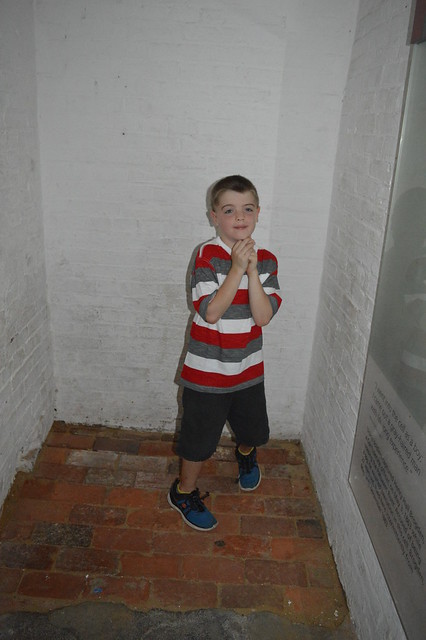 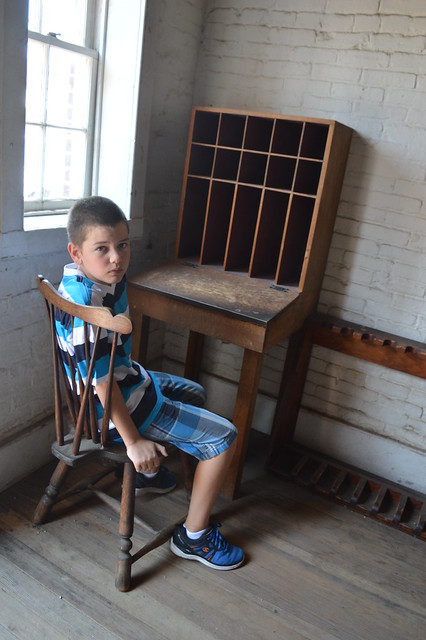 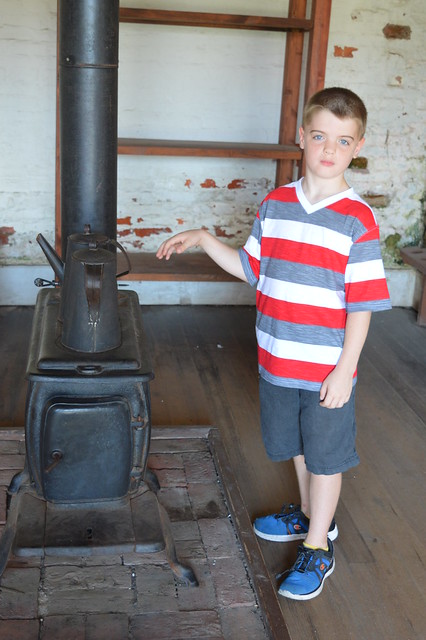 It was a sticky hot day and the kids and I are not much into military history so we didn’t look at every single space or exhibit in detail.  We walked around the ramparts and took in the views and we pottered around in the various barrack buildings.  Each building exhibited a period of the fort’s history, including its use in the First World War as a military hospital and its use in the Second World War as a coastguard base.  There was a room filled with barrels to show what the gunpowder stores would have looked like and there was a collection of cannon outside one building. 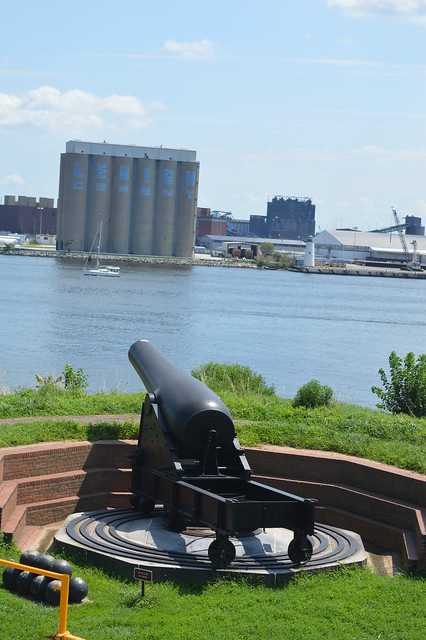 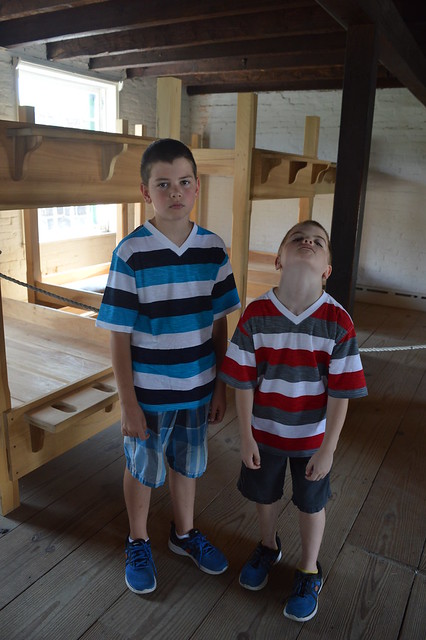 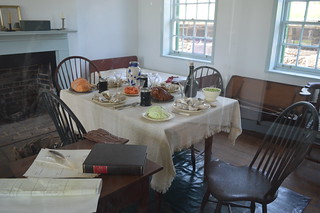 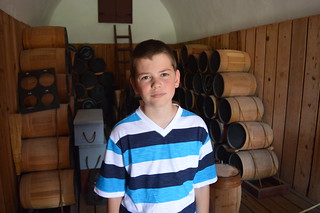 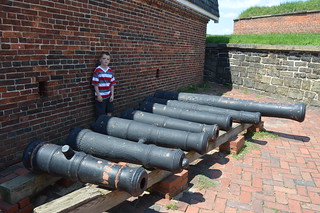 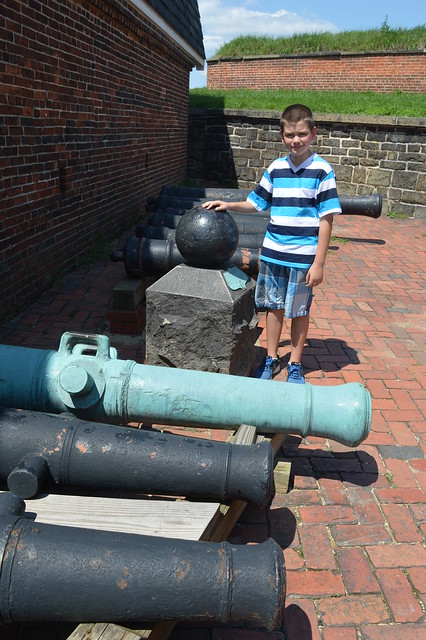 The boys had had more than enough of visiting the fort, especially because it was so similar to Fort Mifflin, so we decided to depart before they spontaneously combusted in a combination of frustration and heat.  They soon cheered up on the walk back to the car, however, since they found dozens of shed cicada skins stuck to the bark of trees. 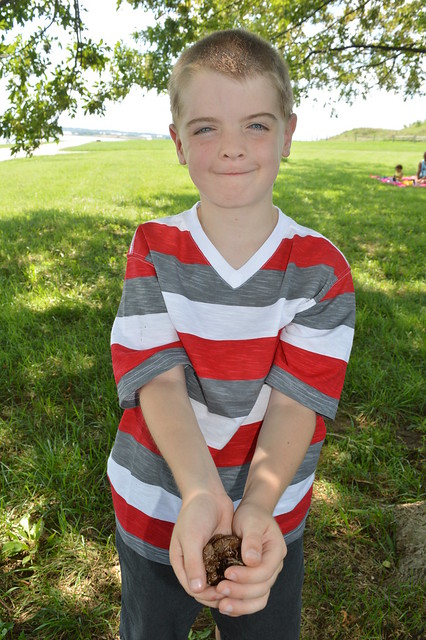 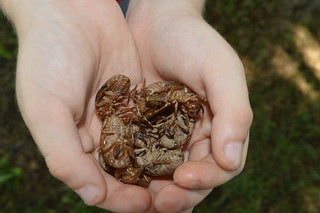 We took the metro into Washington DC having decided that the National Museum of American History would be a good choice of place to visit since the kids had done a Natural History Museum when we were in New York and because we are trying to provide them with an overview of US history and top up their general knowledge of American History.  Disappointingly, however, it transpired when we picked up the map that half of the museum was closed.  Literally half of each floor was unavailable.  Perhaps we should have done our homework rather than relied on our own knowledge to select the venue for the day but still it was incredibly frustrating.  I had last been there in 1995 but had remembered it as being really interesting and full of diverting exhibits and the kids were looking forward to it so we decided to plough on with the plan.  The Museum has, as one might expect, had a major facelift since I last visited but sadly – like many literal facelifts – this one was not beneficial.  It was a case of the Good, the Bad and the Ugly.

The Good section was that focusing on the Star Spangled Banner.  When I had last visited, I had entered the main entrance and been greeted by the original Star Spangled Banner.  It was an impressive site and an awesome welcome but from a conservation point of view it was clearly catastrophic.  Therefore, in the intervening decades, it has been moved into an atmosphere and light controlled room and is displayed behind a vast glass panel.  The corridor around the flag has been cleverly thought out in terms of the exhibits as it is themed on the national anthem, using Francis Scott Key’s poem “Defence of Fort McHenry” to tell the contextual story of the flag’s creation and significance.  So there was a rocket – as in “rocket’s red glare” – and a bomb – as in “bursting in air” – showcased along with some other military items.  There was also a display case of sewing items as might have been used to create the flag and biographical information about Mary Pickersgill who sewed the flag along with her daughter, two nieces and two African-American women.

The Bad was the Presidents’ section.  The kids were really looking forward to it since they have become pretty obsessed with learning facts about various Presidents as my 7 year old did a school project about George Washington for President’s Day and my 8 year old had to do a research paper on a President of his choice.  Since he loves to be obscure, he chose James Abram Garfield who actually turned out to be more interesting than you might imagine for a president who only lasted 200 days, most of those days being spent on his deathbed – yet not completely interesting either.  The 8 year old is also a massive Lincoln fan and the 7 year old’s favourite is Teddy Roosevelt because he protected wildlife in the US while going around shooting it and also hunting animals in other people’s countries.  My husband and sons are also related to two Presidents – John Adams and John Quincy Adams – so that was another route to engagement in the whole history of the Presidency.  The Presidents’ section should have been fascinating since it was filled with such wonderful items to showcase.  However, it had been organised in such a way as to be a complete muddle.  One might think it would be organised in terms of chronology, from Washington to Obama, or maybe even in terms of the President’s role if the curators were wanting to do something more avant garde.  However, they had opted to organise it in such a way that it was just a hodge podge with no clear thread pulling visitors through the exhibits.  It was like a pot luck supper as we wandered from one area to the next.  We moved from a side section dedicated to Presidents who had been assassinated or died in office into a section about weddings at the White House, surely a strange and awkward juxtaposition by anyone’s standards.  There was just no logic to it at all, as if the people curating it had a junkyard mentality.

The Ugly was the American Stories section.  My understanding was that the items displayed had been chosen through ‘crowdsourcing’, by “the people” deciding by some unclear mechanism which exhibits best represented America.  As much as inclusivity and democracy are wonderful ideals to aspire to, the whole section was evidence of the fact that not all curators are created equally as it ended up just a random “jumble sale” of bits and bobs with nothing properly telling any kind of story about America because there was simply no context, no structure and no apparent point.  I was very excited to see Miss Piggy, Benjamin Franklin’s walking stick, FDR’s microphone from his Fireside Chats and a life mask of Lincoln but I think anyone would be hard pressed to see a connection between any of them beyond their icon status, though that was a theme not supported by the inclusion of dozens of other items.  Furthermore, none of the labelling supported the claim to be telling us stories about America or the American experience.  I subsequently looked at the Museum’s website and read that the exhibits fell into five clusters representing eras in American history but that was not supported by either the layout or the labelling. The whole thing made by brain feel fidgety and, since the kids were becoming increasingly literally fidgety, we decided to depart from the museum.

We walked to Union Station past the sculpture garden of the National Art Gallery.  I think the kids would have liked to have spent more time there but we were on our way to meet up with a friend at Union Station.  That just added to the sense that we had wasted time in the Museum of American History.  We dined at Thunder Grill.  The food was delicious.  I had a catfish sandwich with smoked tomato aoli and salsa which was succulent, full of strong but well-balanced flavours and very satisfying.