After a pleasingly mild winter, this weekend we got slammed with all our winter weather at once.  Winter storm Jonas walloped us over the weekend, dumping an incredible amount of snow in a short period of time.  It is difficult to determine exactly how much snow we got in our neighbourhood – the blizzard’s winds created drifts a good few feet high in some places while other patches had under a foot – but I estimate we had over two feet of snow.

My brother-in-law was supposed to fly in to see us with his wife and son on Saturday.  While he had to contend with the stress of cancellations and postponements and changed plans, we were thankfully all cosy and safe at home as the snow packed in around the house and made the street disappear.  My husband did a power of work digging out the drive over and over and tunneling narrow pathways through the snow. Rather than go sledding, the three younger boys decided they wanted to go for a walk through some nearby woods in the snow.  They passed a man walking with snow shoes and using cross country ski sticks but they were undaunted.  They were excited to spot animal tracks in the otherwise unblemished snow.  Even more exciting was the news – delivered during post-walk hot chocolate – that there was no school on Monday.  They have been hoping and yearning for a Snow Day all winter and they finally got one. 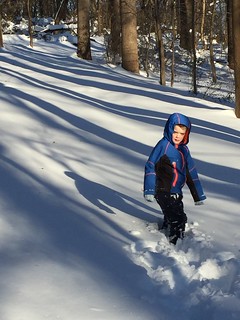 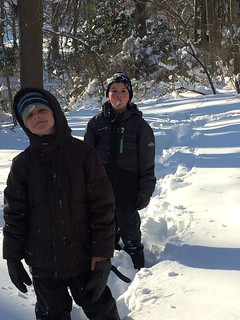 In addition to yesterday’s Snow Day, we also had a delayed arrival for school today.  Not everyone has cleared their portion of the sidewalks and in some places the snow piles (an accumulation of snow drift and snow ploughing) are taller than I am but we had our snow boots on and trudged valiantly ever onwards.  Since we had to walk in the road at points, I was glad of the two hour delay since it meant there were fewer cars to contend with.  The kids, of course, would have rather had another Snow Day.