Last weekend was Memorial Weekend here in the United States.  Memorial Day commemorates members of the country’s armed forces who have died in service.  As such, it seemed apt that we spent Memorial Weekend touring Civil War sites.  Our first stop was Antietam, in Sharpsburg, Maryland.

Confederate General Robert E Lee moved his army from Virginia towards the north and into Union territory.  Around the same time, Union General George McClellan moved the Army of the Potomac into Frederick, Maryland.  On 17 September 1862, these two forces collided on the Antietam Creek in what would be the bloodiest single day battle of the Civil War – and indeed the bloodiest day in American military history.  Of the approximately 100,000 soldiers involved in the battle, there were 23,000 casualties.  Ultimately Lee was repulsed back into Virginia and the Union held the area.

We started our tour at the Visitor’s Center where we chanced upon a small reenactment group marching and firing guns.  The Visitor Center itself offered a useful synopsis of the battle as there was a short movie to watch and some exhibits.  I found both to be particularly handy since – as I have explained before – I am not all that keen on military history.  The documentary fixed the broad stroke events of the day in my head while the exhibits in the small museum helped me engage with the subject through seeing things like medical field kits, uniforms, and drums.  What I learned (or relearned since Mr Pict has told me this several times) is that Antietam was a pivotal battle in the Civil War and not just because of the Union victory.  It was also significant because it led to Lincoln issuing the Emancipation Proclamation and prevented Britain and France from getting involved in the conflict. 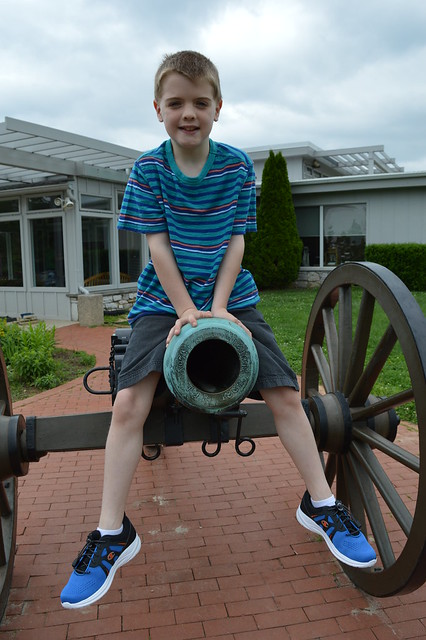 Mr Pict decided to lead us around the site according to the chronology of the battle.  We, therefore, started at what was once woods and cornfields.  I look at the landscape of a battlefield and really cannot engage with it.  It’s just landscape to me.  I need features and clear narratives.  I need the human side of things rather than tactics.  I, therefore, left Mr Pict and the kids to wander around the fields while I headed into the Dunker Church.  The Church, belonging to a pacifist German sect, had been on site for just ten years before it became a focal point of the bloody battle.  Being inside I was reminded of what I had read of the townspeople.  They hid in basements and caves during the battle and emerged to find their properties destroyed (one deliberately) and scenes of horrific slaughter.  While there was not a civilian casualty in the battle, the soldiers malingered in town long enough to spread disease to the civilian population.  Always finding the social history angle on the military history. 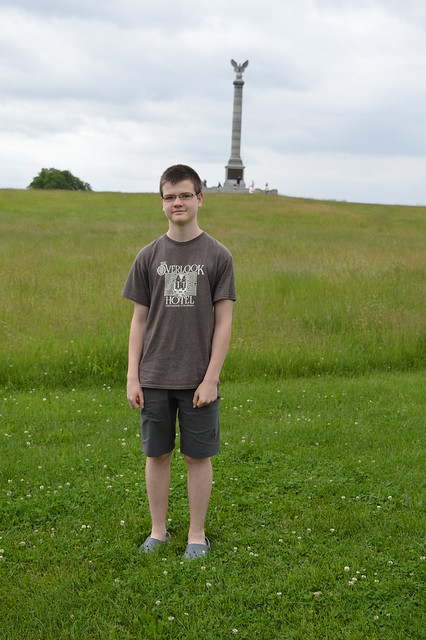 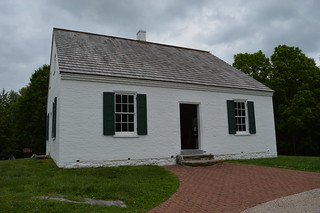 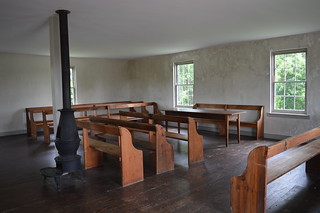 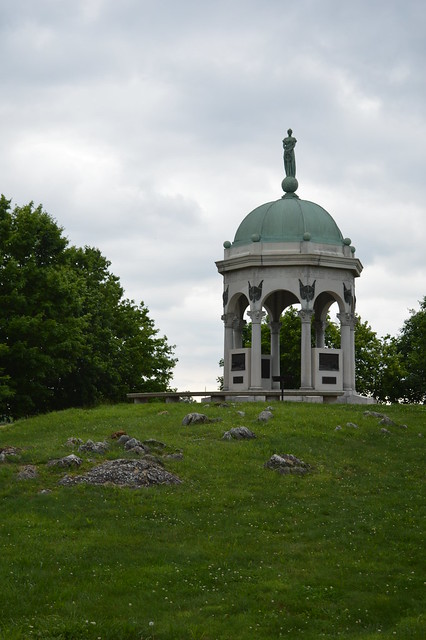 Our next stop was the dramatically named “Bloody Lane”.  This was a sunken road that cut through the farmland.  The Confederates were using the built up land around the road as a parapet and were able to fire down upon the Union soldiers who were moving across the farmland and were funneled into the narrow sunken road.  The result was absolute carnage as illustrated by the photographs of Alexander Gardner.  Knowing those photographs as I do, I found it quite haunting to be walking along Bloody Lane.  I could actually visualise the horror of the scene.  We emerged from the sunken road at an observation tower.  As much as I appreciate a good view, I took one look at the narrow and open iron staircase inside and decided against ascending.  Instead, I waved from the bottom at my husband and children at the top. 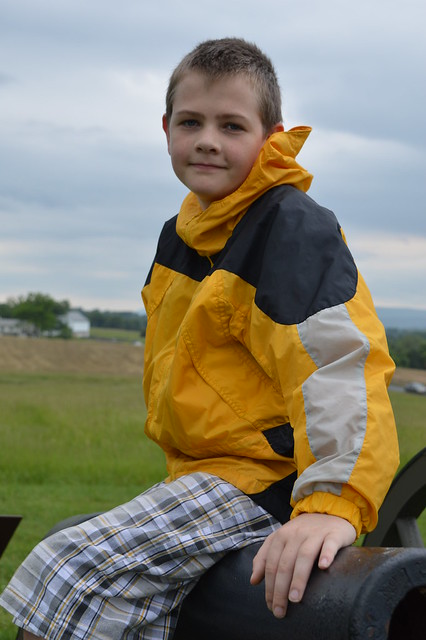 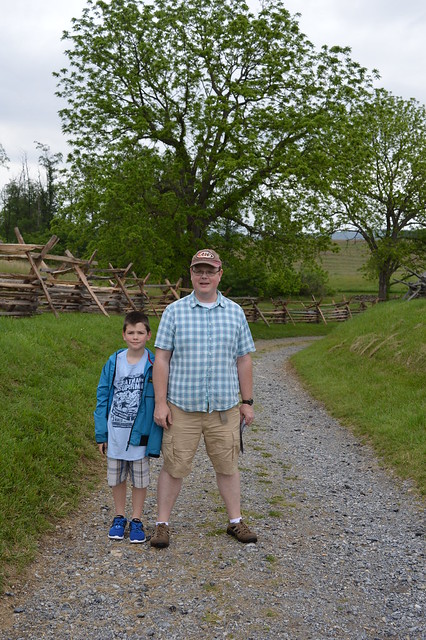 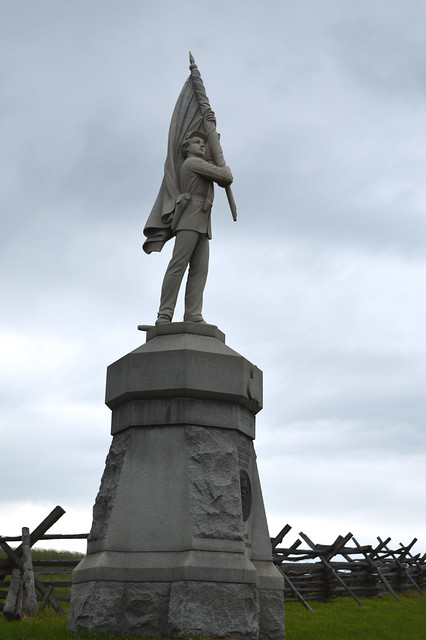 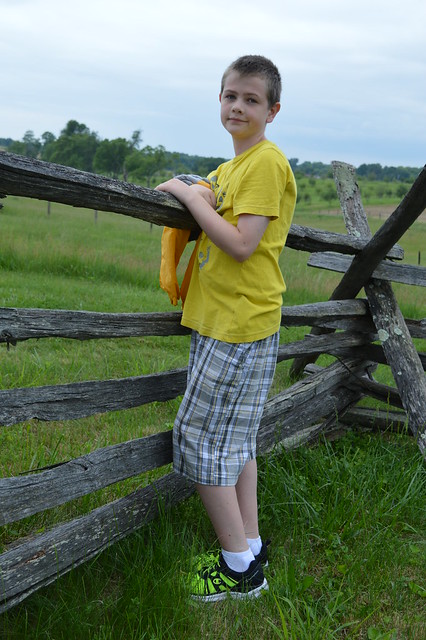 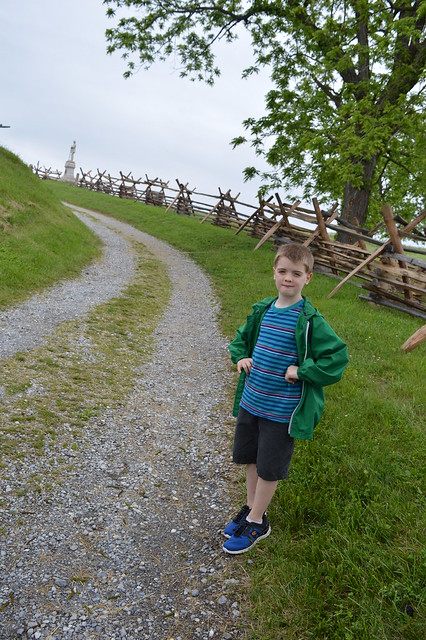 I would have loved to have moved on to the National Cemetery because I love cemeteries.  However, it started to rain hard.  We were wearing our raincoats so were largely protected from the rain but the grass was slippy under foot and it was muggy and sticky which feels gross when wearing waterproof layers.  And everyone was protesting about visiting a cemetery so there was that too.  We, therefore, hoofed it back to the car and drove to the next destination and battle point: the lower bridge, also known as Burnside Bridge.  Once there, 50% of our troops refused to trek down to the bridge so Mr Pict, the 10 year old and I plodded on with our reduced numbers.  On the day of the battle, the bridge was being held by Confederate troops (from Georgia if I am remembering the video accurately) who were able to pick off the approaching Union soldiers with ease from their position on the bluff overlooking the bridge and the road approaching it.  After being in the sunken road, it would appear that the theme of the day had been carnage in narrow spaces. 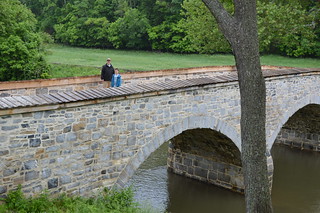 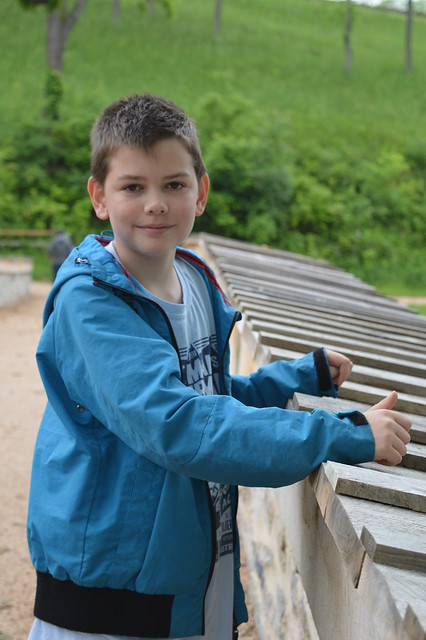 The highlight of my 10 year old’s trip to Antietam was “befriending” a millipede.  At least, unlike his brothers, he actually saw all three key sites.  I have decided that one day they will look back and appreciate that their father and I dragged them on all of these trips to historic places. 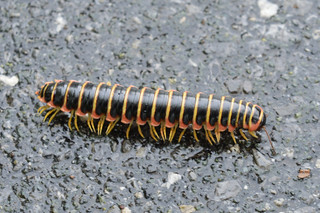 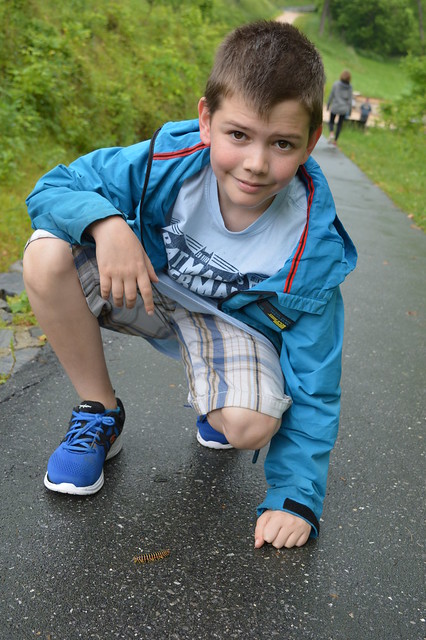