I feel like I have been working on my Rainbow Art Journal for an eternity. I definitely work on this project in fits and starts with long periods of neglect. Deciding it was time I got those mixed media muscles working again, I cracked open my Rainbow Art Journal and play around with some acrylic – a medium I have not used in months.

I am still malingering in the blue section of the Art Journal. I don’t think I am even half way through the pages yet but finally getting to the end of the blue section will, I suspect, feel like movement*. Blue often makes me think of sea and sky so that is what inspired this illustration of a lighthouse. It did not take me long to recognise the extent to which my painting skills have atrophied due to an extended period of not practicing. The results are ugly. It’s a very rough and patchy page and my lines are very wonky and wobbly, even by my own standards. It was tempting to give everything an additional coat of paint and start over but a) I did not have the time available and b) I figured it would be a place marker in my Art Journal, demarcating where I returned to the project and started over, and therefore provide a measure of the progress I can make from this point forward.

*A check of my blog reveals that I embarked on the blue section in September of last year. Even more staggering is the fact that I started the whole Rainbow Art Journal in January of 2017. I really am tortoising my way through this project!

We have crossed the Atlantic again in our History of Art summer project in order to study the American artist Winslow Homer.  I should have taught the kids about him before we moved onto the Impressionists and from there the post-Impressionists but never mind.  I wanted to include Homer in our studies so that the kids would have another example of nineteenth century American art in their knowledge banks.  For obvious reasons, my own knowledge of art history tends to be more Eurocentric.  I also wanted them to think about seascapes as a subject for art.

We looked at some of Homer’s most famous paintings –  ‘Breezing Up’, ‘Fog Warning’ and ‘Northeaster’ – paying particular attention to how he rendered the sea in paint, the variety of shades and tones involved, the texture, the shapes.  I then encouraged the boys to use their creative time as an opportunity to experience mixing shades and tones of blue.

Surprise, surprise, the 9 year old refused to use paint.  He loves art and draws all the time but I cannot seem to compel him to work in anything other than pencil or pen.  I feel like my personal challenge for this project is going to be to get him to paint.  He is fanatical about the Percy Jackson series of novels so he decided to draw something inspired by Percy Jackson discovering that he is the son of Poseidon.  I like his use of complementary colours in this drawing. 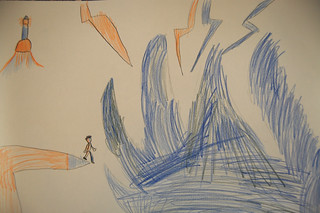 The other three did take me up on my suggestion to practice mixing shades of blue.  My 12 year old likes to keep things separate rather than blending but he used a sponge brush to create wiggly stripes in the different shades and then he had fun spattering white paint on to the blue to be sea spray.  If it isn’t Minecraft with him then it’s a penguin.  He drew the penguin on a separate piece of paper and adhered it to the painting. 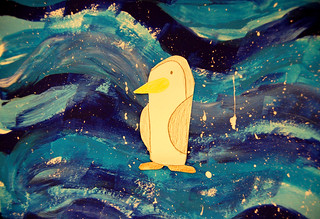 The 6 year old enjoyed creating the movement of the sea with the blue paints and he too had fun spattering.  Inspired by his big brother, he too collaged on a drawing he did of a penguin but he also added a narwhal for good measure.  Because everything is better with a narwhal, right? 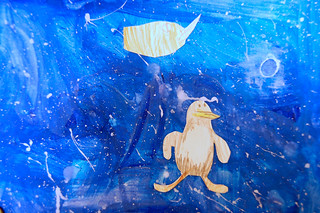 The 8 year old took the same approach but he drew a seal.  We had just watched the animated movie ‘Song of the Sea’ (which I highly recommend) and I had subsequently been telling them old folk tales about selkies.  His seal, therefore, is really a selkie. 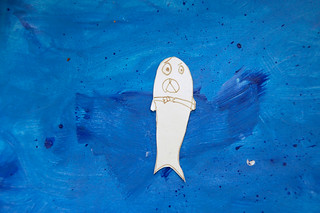 For my part, I decided to construct a collage in my art journal.  I used torn strips from gelli plate prints for the sea and watercolour for the sky.  The sea spray is dots of paint because I have a slight addiction to incorporating dots into my art work.  Have you noticed? 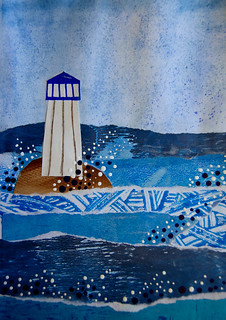 Head on over to my Pict Ink blog if you want to see my Winslow Homer inspired Crazy Critter.