I love to draw jellyfish – as I have shared before in this blog – and I was recently inspired to draw more of them after looking at Leanne Cole’s superb photographs of jellyfish over on her blog.  I was itching to get drawing jellyfish but could not seem to find time to make a start.  Then the prompt for this week’s Documented Life Project prompt arrived in my inbox and  I knew immediately what I wanted to create in my art journal: jellyfish, of course!  The theme continues to be photography, which tied into me using Leanne’s wonderful images as the scaffolding for my drawings, and the prompt was silhouette, which I thought I could happily interpret as meaning the strong and black inky lines of my drawings against a bright background.

I usually only create one page in my art journal for my DLP challenges but this week I got entirely carried away and made three.  Having sketched several jellyfish in my small sketchbook, I could not decide between the three I liked the most.  Three drawings was a good excuse to experiment with different backgrounds – spray inks in different colours and watercolour – so I had a lot of fun playing around with the creation of the bright backgrounds and with drawing the jellyfish with a brush and my trusty pot of ancient India Ink.

Please do let me know which jellyfish and/or background you like best of the bunch. 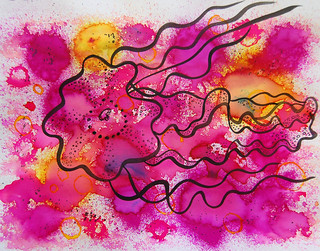 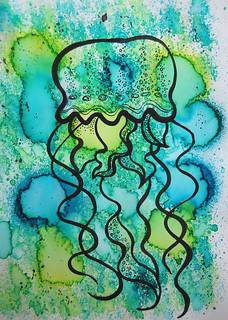 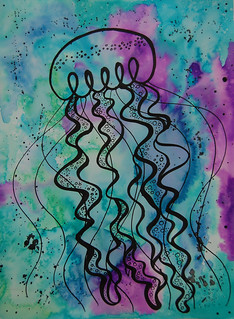 I have a thing for drawing jellyfish.  I love the sinuous shapes, so perfect for line drawing, and the variety in form.  I like the way they are transparent but with a pop of bright colour.  I have a vivid memory from childhood of being on the beach at Nairn and my sister and I finding a shoal of large jellyfish washed up on the shoreline.  We had seen jellyfish before but never on that scale.  They were completely transparent but had a vivid splash of violet in their centres.  They looked incredibly gelatinous and as if they might pop like a bubble when touched but we discovered they were firm and robust under our prodding fingers.  I thought they were awesome.  Maybe that experience was the seed to my enjoyment of drawing jellyfish.

Of course, I have never been stung by one.  Maybe I would be less appreciative of their charms had I been.  When we were holidaying on Crete, Mr Pict was stung by umpteen small jellyfish.  He hopped out of the sea, writhing with pain.  Immediately several people offered to urinate on him to neutralise the effect of the sting.  So, if you never want a complete stranger to pee on you, don’t get stung by jellyfish.  Mr Pict declined their offers and sucked up the pain, thankful that the jellyfish had been of the small yet stealthy variety.

Here are photos of some of the many jellyfish I have drawn in the past.  Two of them were sold but the portrait of the Lion’s Mane jellyfish is still with me and will be found wall space in our new house.

This week’s prompt for the Documented Life Project was to use a white pen prominently.  I did not feel much inspired by that prompt.  This was partly because it was hot on the heels of last week’s prompt to work in black and white so felt a bit samey and partly because I am new to using white ink and I just have not got the hang of it yet.  It was also in no small part down to the fact that I am still wading through the chaos of our house move, the kids’ return to school and have developed a nasty head cold all while my husband is away working for the week in California.  It is difficult to feel inspired when you are exhausted.  Then it hit me: jellyfish.  A line drawing in white would convey the translucency of the jellyfish.

I needed a colourful background in order for the white to stand out so that was the first stage.  An old, used text book had been left behind in one of the cupboards of our new home by the previous owner so I tore a page from it and stuck it into my art journal.  I deliberately pasted it upside down so that I was not distracted by the words but in retrospect I wish I had torn the paper into shreds and glued it haphazardly into the sketch book.  I shall have to remember to do that next time I use a text page.  I then brushed some loose, very watery paint over the text page and – once that was dry – used some small stencils to add pattern and another layer of colour.  I also topped and tailed the page with some washi tape to add yet more layering, shape and colour.  Then came drawing the jellyfish in white pen.  I did not sketch the jellyfish first as I knew it would be difficult to see the faint pencil lines amid all the layering of paint and ink so I had to just confidently apply the white ink and hope for no mistakes.  I resorted to using the photo of one of my previous jellyfish (the first one pictured here) as a guide.  I found I had to go over my drawn lines three or four times to really make the white anything close to opaque.  I found that quite frustrating.  White pens and I, it seems, are still not on friendly terms.

So another week’s challenge was completed.  A jellyfish appeared.  And nobody had to pee on anyone else.