Any lesson on Edvard Munch was bound to be dominated by The Scream: not only is it Munch’s most famous painting but it has become iconic, the subject of many pastiches and homages.  It has also been stolen a few times so clearly it appeals to people both honest and dishonest.  The kids and I, therefore, spent some time discussing why we thought the painting captured people’s interest and imagination to the extent it has.  We also discussed Expressionism and the ways in which The Scream conveyed emotions.  We then looked at a few of Munch’s other works but it was clear to me that the boys were likely to work on drawings inspired by The Scream.

My 12 year old of course had to Minecraftify his version of The Scream.  I think the focal figure is an Enderman.  It is interesting to me the way he has flattened the perspective when it comes to the depiction of the fence.  He would benefit from looking at how to work with angles to create an accurate perspective. 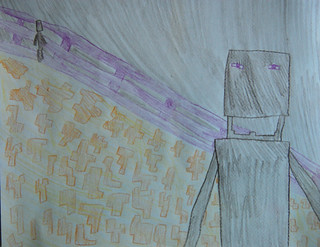 My 8 year old turned The Scream around and used its visual structure as the basis of a drawing depicting joy instead of anguish.  Because horses make him happy, his figure is strolling along a path past a horse.  I think he dashed this drawing off in under five minutes. 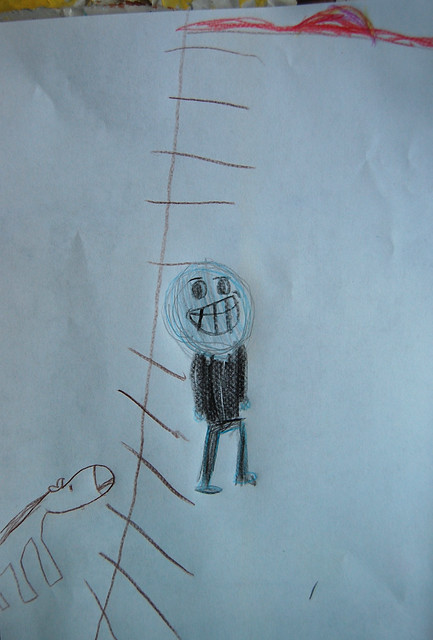 My youngest son focused on the concept of conveying emotion.  Having not long since seen the Pixar movie ‘Inside Out’, he liked the idea of characters representing different emotions so he drew some quick, simple figures.  The blue one is sadness – as his writing explains – and I suspect the yellow one is joy, as in the movie.  I am not clear about what the triangular one is. 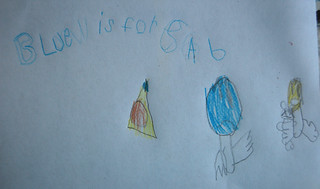 My 9 year old decided to fuse two different Munch works – The Scream and the Self-Portrait with a Skeleton Arm – for his drawing.  His, therefore, is a screaming skeleton.  I think the drawing is quite effective, including the frenetic mark making in the background which I think was unintentional and is just a symptom of him rushing but which actually works within the context of the drawing. 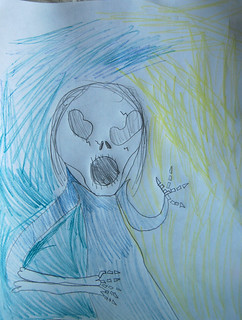 Like my second son, I took my inspiration from Self-Portrait with a Skeleton Arm.  I was originally going to create a version of his lithograph titled The Brooch but then I decided I should challenge myself to draw a self-portrait.  It’s an ink and wash drawing using India ink.  The proportions are out of wack – the arm being too close to the head – but otherwise I am pretty happy with the drawing. 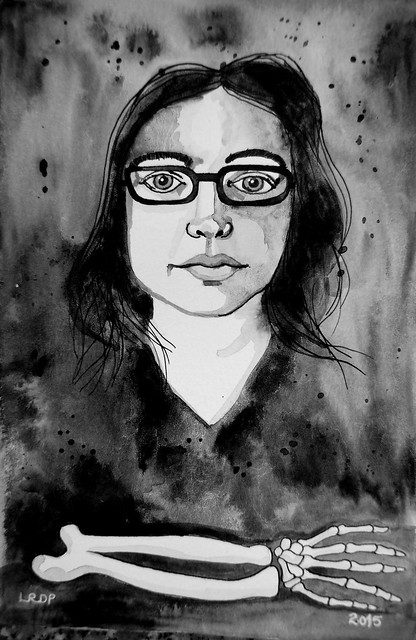 Want to see a Bunny Scream?  Have a squizz at my other blog.