It is actually rather surprising that I have lived in the Philly suburbs for two years and yet Sunday was my first ever trip to the Philadelphia Museum of Art.  We have, of course, past it many times.  It is a hard to miss the main building, imposing in its elevated position and in its architectural stylings as some sort of Greek temple.  The first Sunday of every month (and Wednesdays after 5pm) are “pay what you like” entry meaning we gave a donation rather than paying the usual ticket price.  That made it much more affordable for us to visit and not feel we had to see absolutely every item on display.  It was the perfect time for us to take the boys along to an art gallery – and the PMA is one of the biggest in America – since we are close to concluding our History of Art project.  It was interesting to see how much learning about art history and theory they had absorbed (way more than I had anticipated) and to see which of the artists we had studied they were eager to see the works of. 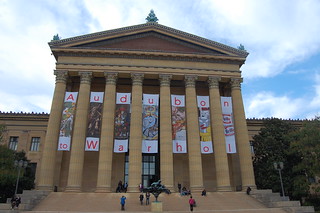 Most of our family trips to museums and art galleries have always involved sketching.  It keeps the boys engaged, keeps them occupied while Mr Pict and I read information about the exhibits, and gets the kids to observe details they might otherwise overlook.  I had intended on taking along our art journals for sketching in but I knew large bags had to be checked at the museum and I didn’t fancy carrying five books around so I had a brainwave and grabbed a large stack of index cards instead.  They turned out to be perfect!  We could hold them in our hands easily while we drew even if we were standing in a crowded room.  The idea was to just draw whatever caught our interest, entire compositions or details, attempts to copy a work of art or just use it as the basis of something else.  My 10 year old, for instance, did a lot of Batman homages and my 12 year old zombified drawings.

I don’t know if it was just that the docents were made antsy by increased visitors (if there even were swollen numbers because of the name your entry fee day) but I have never been made to feel more unwelcome in a museum in my life – and I have been to a vast number of museums in my time.  My kids were well behaved but I was made to feel as if I had to keep them shackled to my side or else risk being chastised by someone in a uniform.  In a wide open room with hardly anyone in it, my kids were sitting on the floor to do some sketching.  Nobody had any difficulty moving around them.  They were not remotely in anyone’s way.  Nevertheless, we were told they had to get up off the floor because they were endangering other visitors.  Later Mr Pict was told off for pointing in the direction of a painting even though his arm would have to have grown at least a foot for his finger to have even come near the painting.  Our little one can be a bit of a hand full so we had eyes on him at all times and kept him in grabbing reach.  Regardless, his butt only just had to touch a bit of the balcony  – because he took a step backwards – and he was told off for doing something dangerous.  It was exasperating.  I also don’t think it is the ethos or atmosphere museums should be striving for.  Exclusivity means encouraging engagement with all types of people including children.  That, however, was the only bum note in our trip and I would say that two of the docents were very good.  One was actively engaging people in conversation about art rather than just staring at visitors and one was very interested in the drawings the boys were doing and gave a hearty chortle when she saw that my 8 year old had turned his drawing of Renoir’s Washerwoman sculpture into Batman. 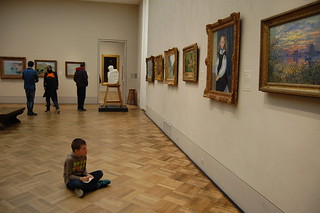 We knew we could not possibly cover the whole of the main building’s galleries in one visit  – at least not without rushing and getting many grumbles from the kids – so we decided to focus on American art and the 19th Century European galleries as that would cover the majority of the artists who we had studied as part of our art history project.  The PMA has an impressive collection of Impressionist and Post-Impressionist works of art.  The boys settled down to draw their first sketches in a room lined with Renoirs, Monets, Manets and one of Degas’ Little Dancer sculptures.  My 6 year old was especially taken with all of the Renoir nudes and used a lot of index cards drawing voluptuous women inspired by Bathers and some other pieces.  We also spent a lot of time in a room containing a Munch mermaid frieze and paintings by Klimt, Schiele and Friedrich.  It was fascinating seeing the Klimt piece – Klimt being one of my favourites – as it was unfinished and I was able to see his approach to painting the different elements of the portrait, making the background and figure cohere. 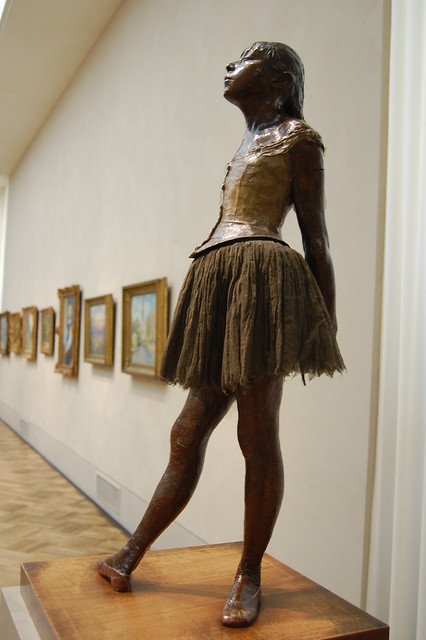 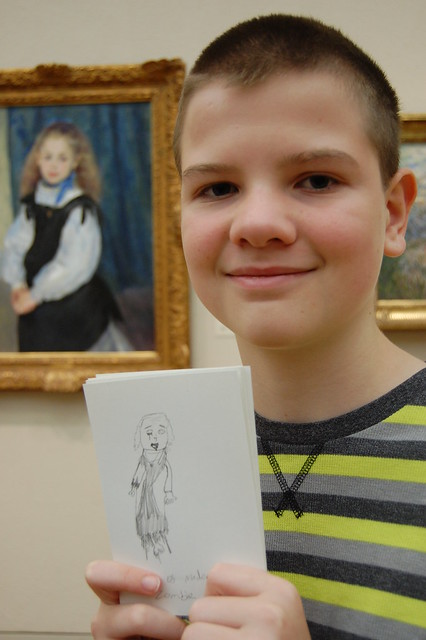 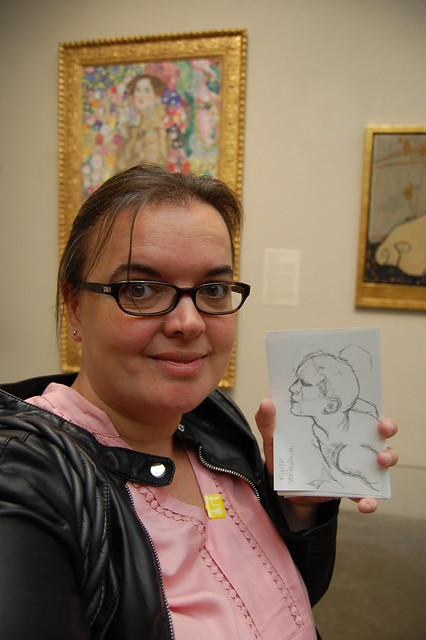 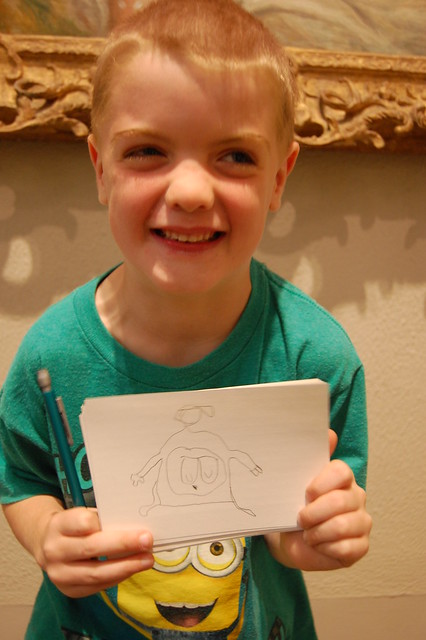 It was pleasing to see the boys recognising the work of artists before reading the labels.  I have been unsure of how much of the learning from our History of Art project has been sinking in but it seems like they have been absorbing far more information than they were letting on.  Cezanne’s Bathers was one of the paintings we had studied so it was cool for them to see its huge scale.  They were excited to spot on of Monet’s water lily paintings and to see one of Van Gogh’s Sunflower paintings and they were chattering knowledgeably about Van Gogh’s use of thick paint.  They were also able to identify a Modigliani from just a glimpse of it in a corridor.  My 10 year old was over the moon to spot a Lichtenstein, whose comic book style had really chimed with him, and they were also able to recognise works by Kandinsky, Mondrian and Klee.  My 8 year old absolutely loves the work of Chagall and Picasso so he was jumping up and down with joy when we first walked into the museum and saw Chagall’s massive Wheatfield on a Summer Afternoon.  He also loved seeing Chagall’s Half Past Three and visited the museum shop in order to buy a postcard of it for his bedroom.  We also spent a lot of time studying Picasso’s Three Musicians and sketching its figures and patterns and shapes, either trying direct copying or drawing inspired by the painting. 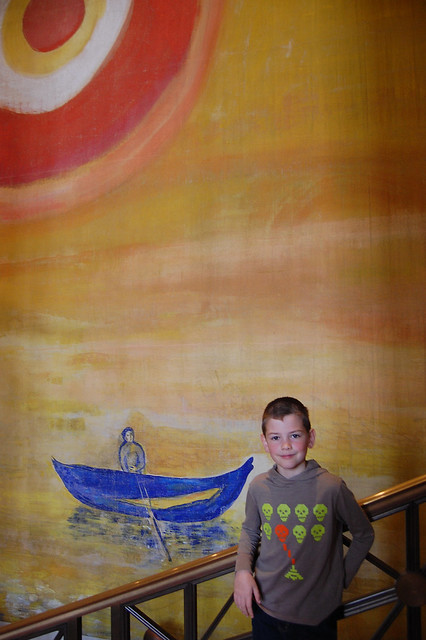 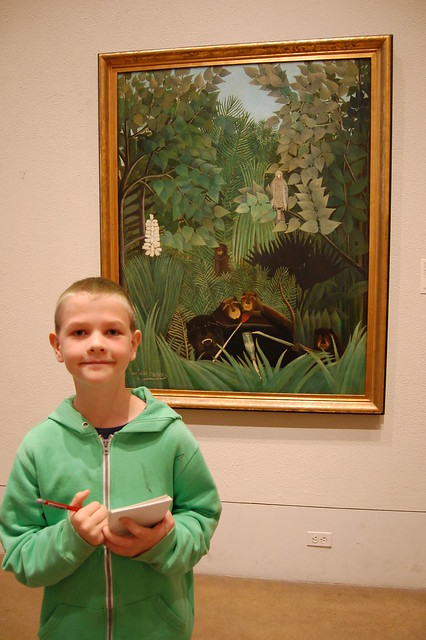 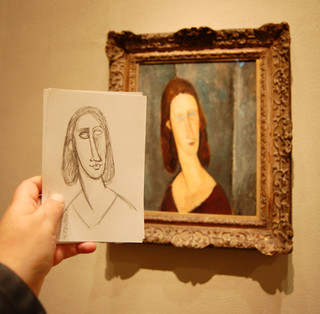 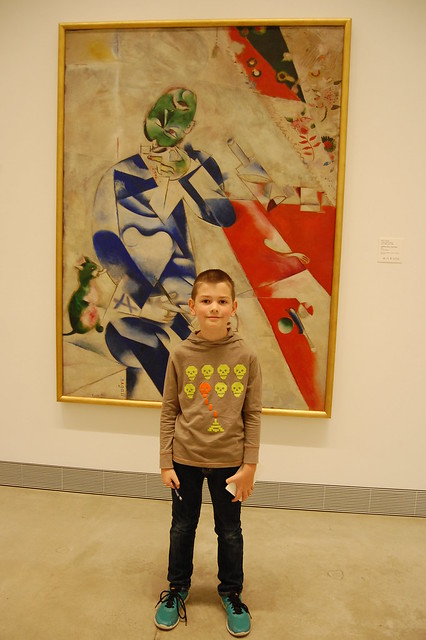 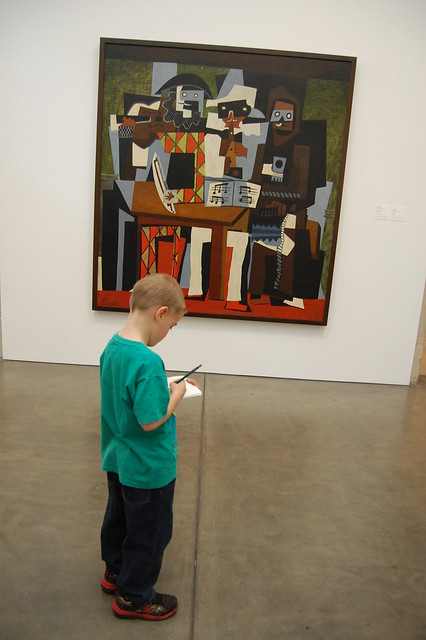 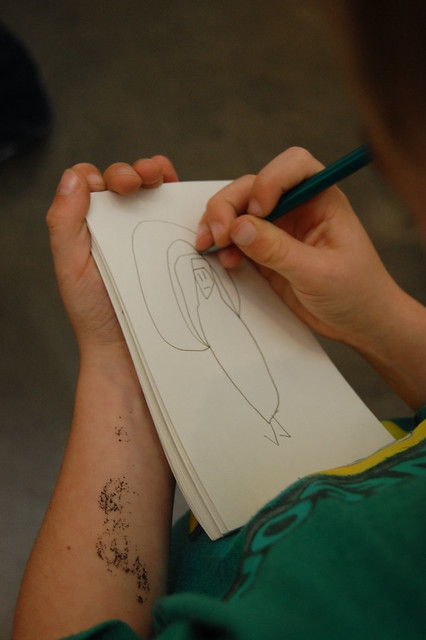 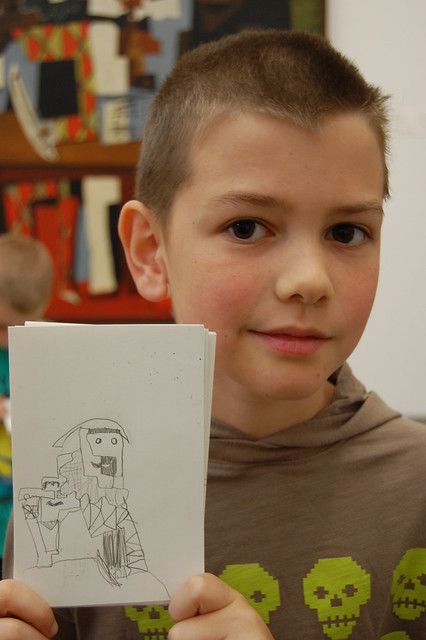 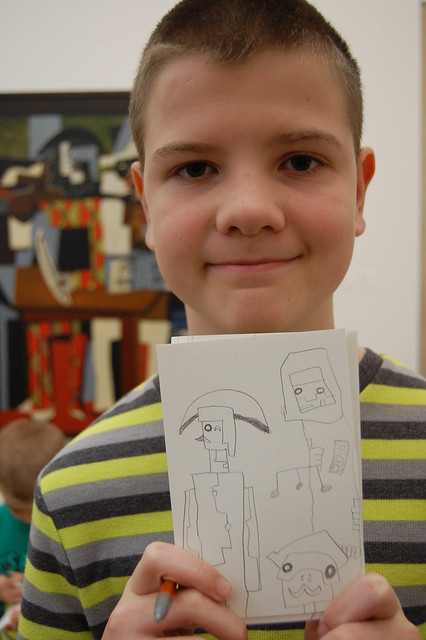 We had a detour through the armoury section and the museum’s collection of rooms from various historic periods shifted wholesale from their original settings.  We also stopped to watch and listen to a group of musicians demonstrating traditional Dia de los Meurtos music.  Then it was time to move onto the American galleries.  The boys’ concentration was flagging at this juncture, however, so it was a speedier walk through with me just pointing out some of the highlights.  I was frustrated to only chance upon one Sargent portrait as he is another of my favourites and I had hoped to show the kids more.  We were able to see a few Winslow Homer pieces, including The Life Line which was one of the paintings we had looked at when studying Homer.  The Museum also holds an impressive collection of paintings by Thomas Eakins, a realist painter from Philadelphia.  He is an artist I am not very familiar with so I was glad of the opportunity to look at so many of his portraits, including two massive paintings of celebrated physicians teaching. 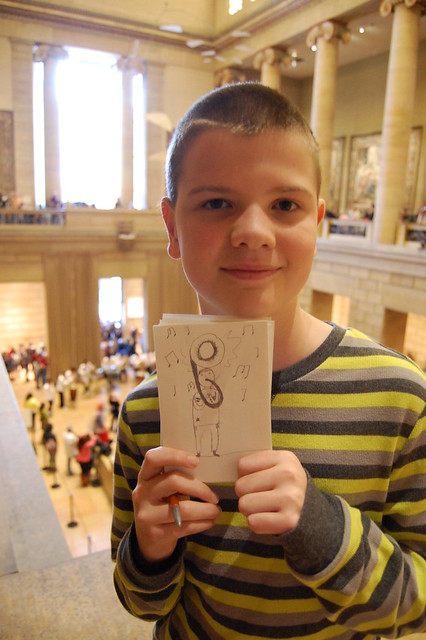 Once outside, the boys could burn off some of their energy.  Although they have never seen the movie, my boys are aware of the iconic scene from ‘Rocky’ in which Rocky runs through the streets of Philly before triumphantly running up the steps of the Philadelphia Museum of Art.  They, therefore, decided to recreate the scene and ran down and then up the steps.  My 6 year old, by far the most physical of my kids, powered up and down the whole flight of stairs several times before we urged him to stop.  We then popped around the corner to take a photo of them with the bronze statue of Rocky at the bottom of the steps.  I find it quite amusing that of all the sculptures in Philly one of the most famous is of a fictional character. 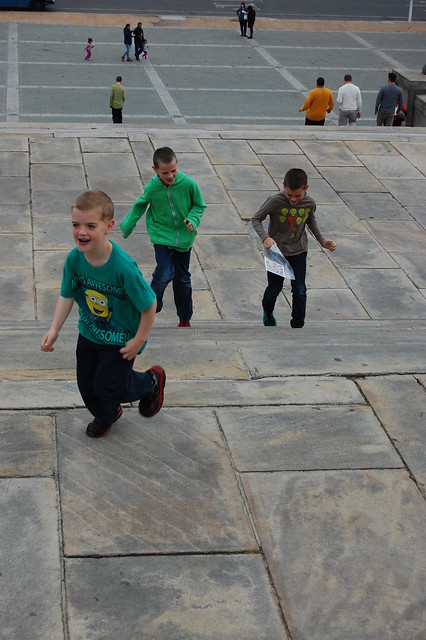 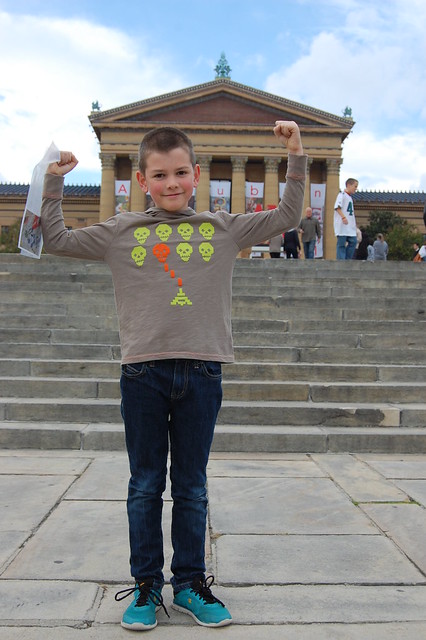 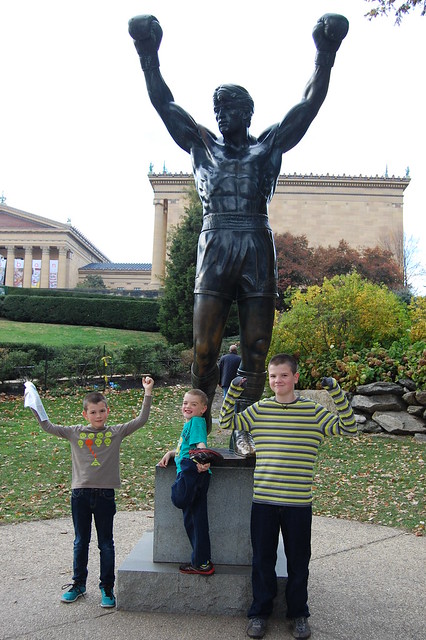 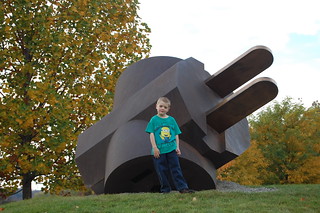 The trip to the Museum was a birthday treat for me.  I love art (you may have noticed) but have not visited a major art gallery since we emigrated to America so it was a real treat to go and visit such a huge collection.  I was unsure of the extent to which the kids would engage with the trip but, between sketching their way around and their ability to recognise the work of certain artists, they were on top behaviour with very little mumping and moaning until they flagged right at the end.  We will definitely return to see more of the museum some other time.  I will also remember to take index cards with me for future trips – we produced almost 100 drawings between us on this single visit. 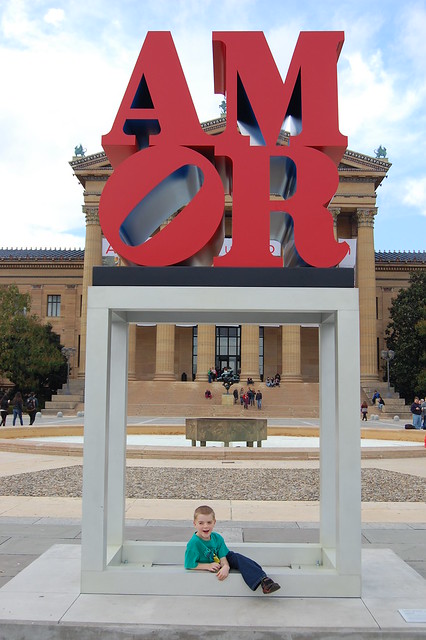