When we shared our summer plans with people and they knew we would be travelling through Cleveland, almost everyone mentioned that we had to visit the Rock and Roll Hall of Fame because of our 9 year old.  Our 9 year old has been learning to play electric guitar for the last year but even more so he is really into listening to music.  His favourites include Elvis, AC/DC, the Beastie Boys, and his absolute and most favourite, Jimi Hendrix.  His taste in music is pretty mature for a 9 year old and very eclectic.  We, therefore, made the Rock and Roll Hall of Fame a priority largely for him. 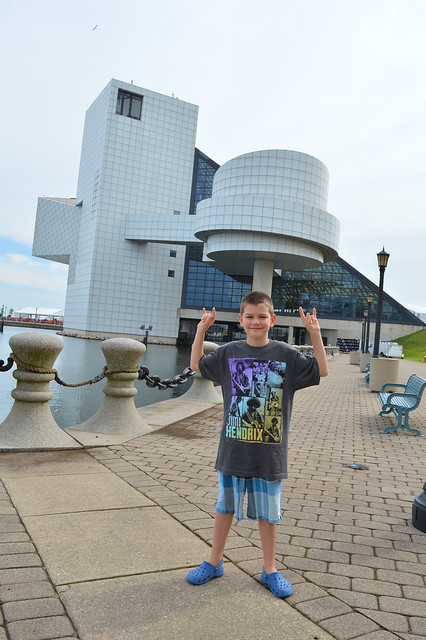 This was actually going to be one of the most expensive things we shelled out for on the trip but as luck would have it we got in for free (excepting the $9 parking charge).  Whereas the RNC had scuppered our plans for Cleveland the previous day, here the disruption was to our benefit as the Hall of Fame was not charging an entry fee while it was simultaneously being used as a secondary stage for the RNC events.  Bargain!  I wondered if the free entry might mean the place was thronging with people but it seemed the prospect of rubbing shoulders with prominent Republicans had kept most people away.  It was actually fairly quiet and actually the disruption was minimal, with just a few areas roped off for the events – and my 7 year old tried to gatecrash a luncheon because he liked the look of their sandwiches.

We all really enjoyed the bottom floor of the Hall which I would imagine is the bulk of their collection, a permanent display of costumes, instruments, videos, recordings, and ephemera associated with a wide variety of musical stars.  My little guitar player loved seeing so many guitars, including some that were battered and bashed from so much use.  He also enjoyed seeing the different designs of guitars, from a Cheap Trick five headed guitar, like a hydra, to Steve Miller’s fire dragon painted guitar, to multiple guitars that had belonged to John Lennon.

There was a section with lots of screens for listening to music and learning about influences, how each musician or group took those influences and combined them and synthesised them into their own distinct style.  It reminded me of a documentary Mr Pict used to watch called something along the lines of Rock Family Trees, demonstrating the connections between each group and musical genre.  My youngest loved being able to use the touch screens and listen to music and my 9 year old was completely absorbed.  He is pretty nerdy about his music so he loved learning about all the connections and the cross-pollination. 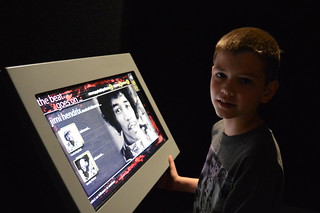 Another big hit with the kids was the Elvis section.  Mr Pict and I have been to Elvis’ birthplace in Tupelo and to his Graceland home but this was the first time our little Elvis fans had seen an exhibition of Elvis items.  They loved seeing his glitzy costumes, especially his gold suit, and they were surprised by how slim he had been.  We also saw his motorised tricycle – far cooler than I made it sound because it was Elvis’ after all – and his double-headed guitar.  A huge wall of screens was playing a video of Elvis performing ‘Suspicious Minds’, my favourite Elvis performance. 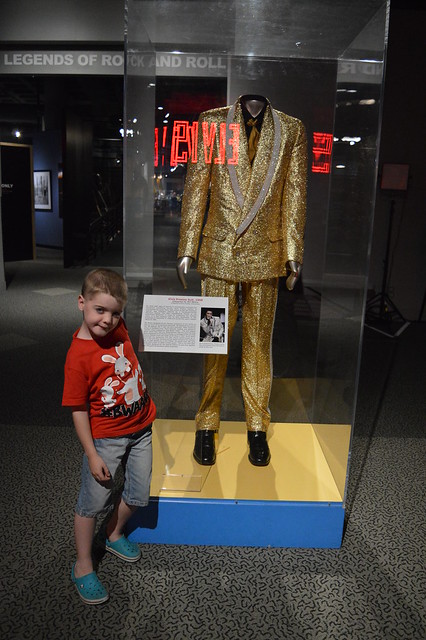 I enjoyed seeing all of the costumes on display.  Highlights included Johnny Cash’s boots, Diana Ross’ willowy frock, Stevie Nicks’ floaty goth dress, Sid Vicious; and buckle strapped boots.  Mr Pict liked seeing Slash’s converse and top hat.  The kids had a chortle at James Brown’s sex machine jumpsuit and my 9 year old loved seeing Angus Young’s school uniform outfit. There was in fact a whole section devoted just to showcasing costumes, mostly flamboyant ones: shiny Beyonce outfits, a Steve Tyler outfit that looked like fancy pink pyjamas, Run DMC’s Adidas sneakers and glasses, glistening sequined dresses of The Supremes, a peacock embroidered Beach Boys suit, lots of bonkers Mick Jagger outfits, elaborate Bowie costumes, and iconic costumes worn by Michael Jackson.  Our 9 year old was especially chuffed to see one of Jackson’s sparkly gloves.  All the boys were excited to see the goggles and rubber gloves worn by the Beastie Boys for their ‘Intergalactic’ video as that is one of their favourites. 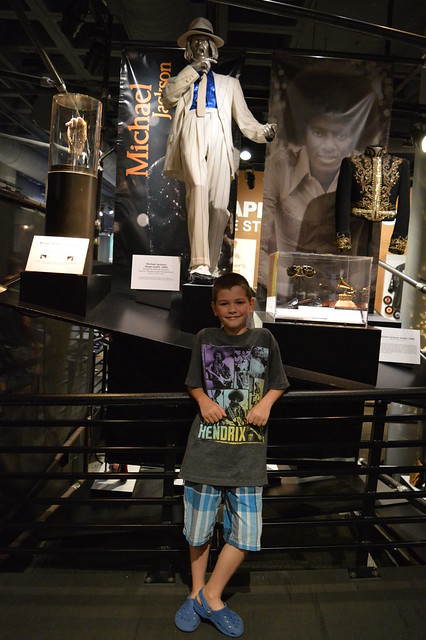 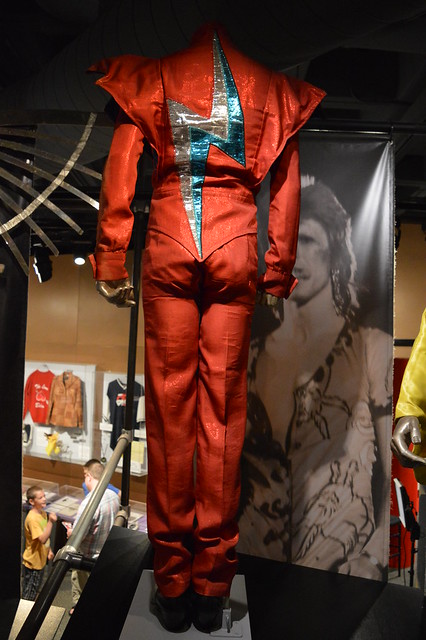 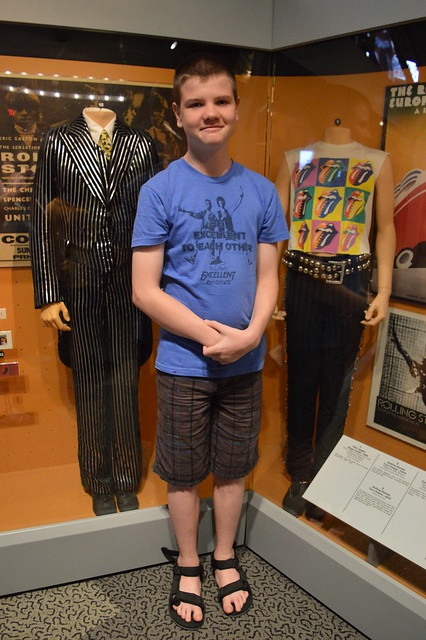 The collection of Beatles memorabilia was impressive.  There were musical instruments galore, including a set of Ringo’s drums, lots of outfits, but also things like John Lennon’s green card and a pair of his round framed spectacles.  The section my 9 year old loved the most, however, was that devoted to Jimi Hendrix.  He is obsessed with Hendrix so when he walked into that area and spotted Hendrix’s sofa it was as if he had just encountered some sort of mystical relic.  His eyes were wide and his mouth agape at each display case.  There were costumes and guitars galore.  He also loved seeing the handwritten lyrics for ‘Purple Haze’ and a collection of Hendrix’s childhood drawings. 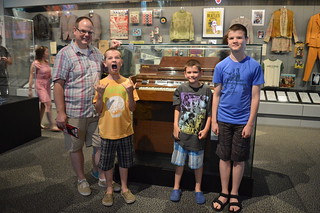 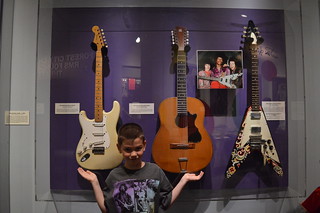 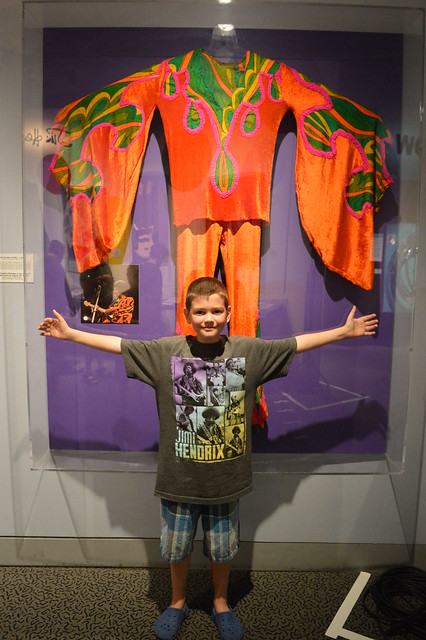 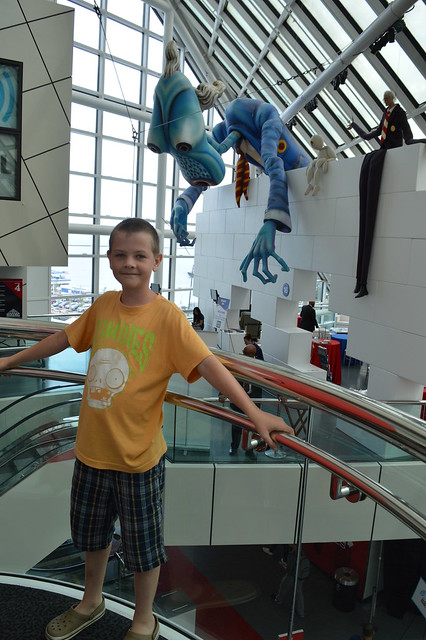 The basement level of the Rock and Roll Hall of Fame was definitely the best part and the area that most engaged and enthralled the kids.  They were flagging in terms of energy and interest by the time we were moving on to other areas of the Hall so we had to just flit through those.  Those areas were also the ones subject to the most disruption, with news crews setting up their recording equipment in front of some exhibits.  We could not be disgruntled or disappointed, however, since the basement level had been so incredible plus free entry meant it could not fail to be fantastic value for money.