Having used the Franklin Institute as an indoor playground for a couple of years, last year we took a break from our membership so that we could return with renewed enthusiasm.  In retrospect, President’s Day was not the smartest choice for becoming members again and reintroducing the kids to the joys of science museums.  The place was absolutely jam-packed and every gallery and area was heaving with people. I do not do well in crowds at all – it’s like an instant recipe for stress and anxiety – but I also feel harassed by the behaviour of other people when places are so busy.  For example, there were way too many children pushing and shoving there way into taking turns with interactive exhibits.  My kids have a tendency to hang back and are too polite to challenge others who queue jump but they still get irked and frazzled by the rudeness of others and, of course, we then get the pleasure of dealing with our annoyed kids.  While the parents of the pushy-shovey kids seemed to be nowhere in the vicinity whenever their kids were misbehaving, conversely there were other parents who were attached like limpets to their kids which also made it nigh impossible to manoeuvre in some areas.  Imagine experiencing epic levels of irritation while trying to cheerfully engage children in science even though you are completely an Arts and Humanities person.  That was the experience I had in the Franklin Institute on Monday. 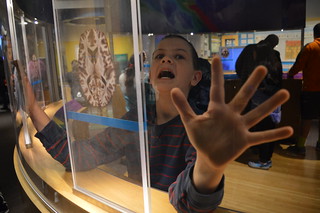 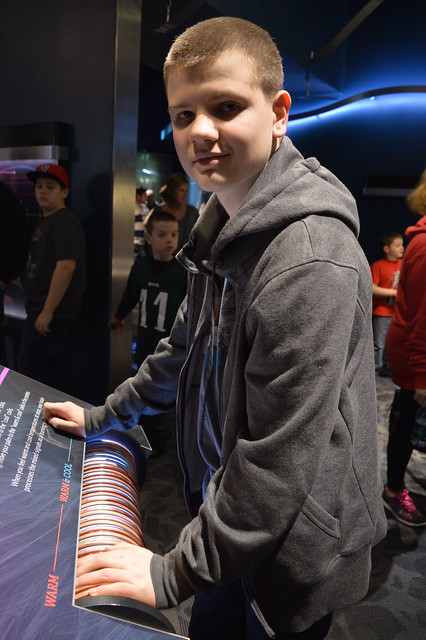 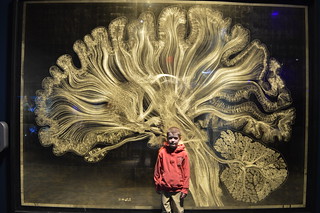 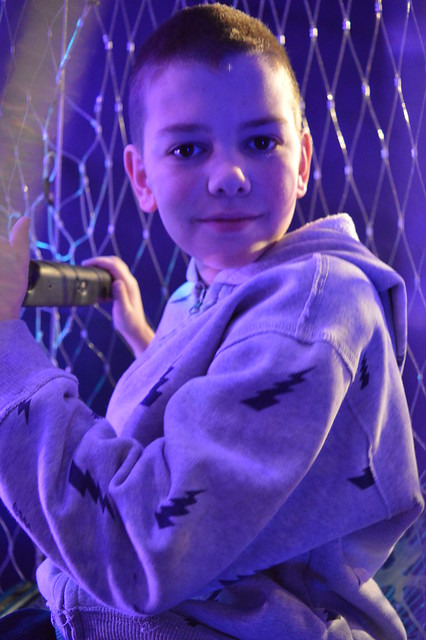 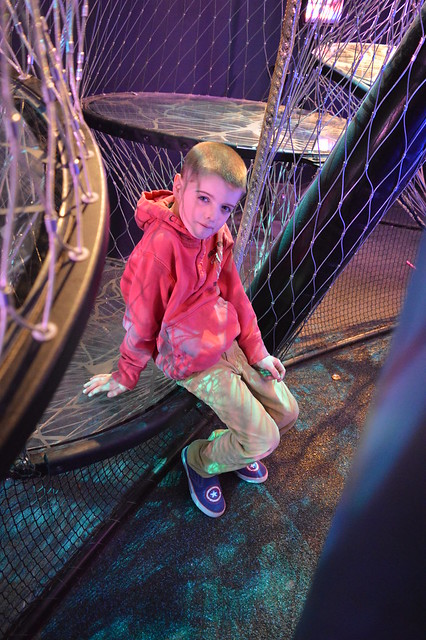 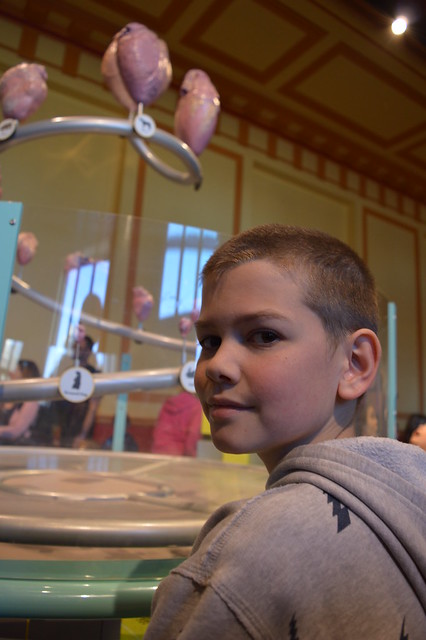 While we stopped by our favourite sections and did what activities we could, we also visited a special exhibition called Robot Revolution.  It was, strangely enough, all about how modern robotic engineering is being applied to different aspects of life.  For instance, there was a large surgical apparatus and the woman standing next to me explained that her father had actually been operated on recently by just such a machine.  There were also robotic prosthetic limbs and robots designed to assess dangers in conflict zones.  There were, however, also robots playing soccer and one that could unicycle.  A big hit with my youngest son was a robotic seal pup, designed to provide therapeutic comfort to people who can’t interact with real animals.  They also enjoyed an area where they got to clip together various cubes, each of which served a different function, in order to construct their own robots. 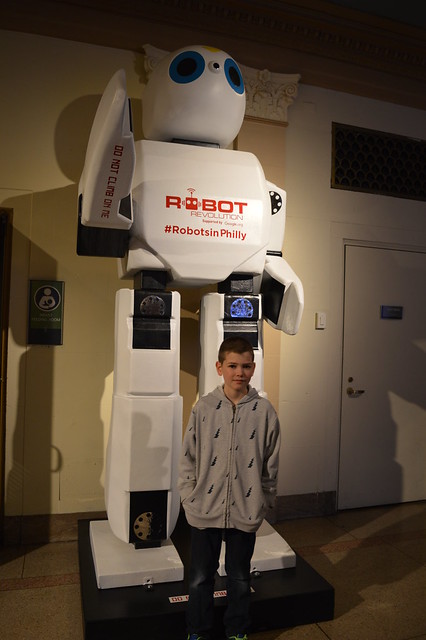 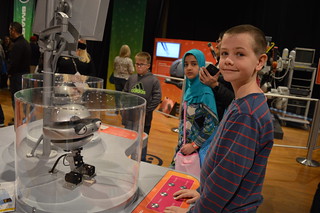 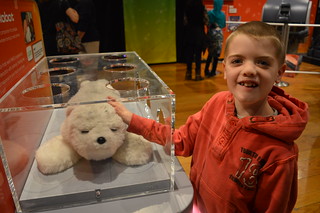 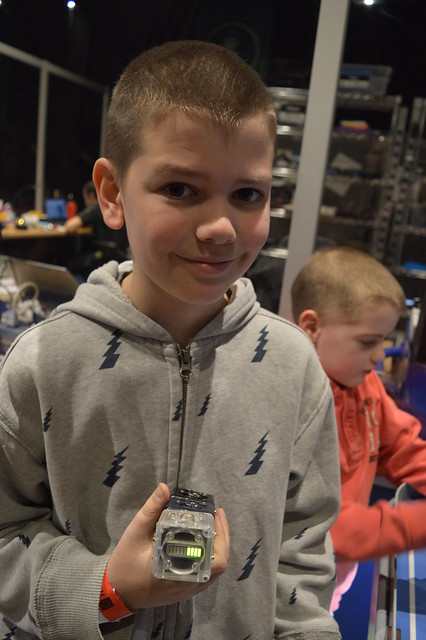 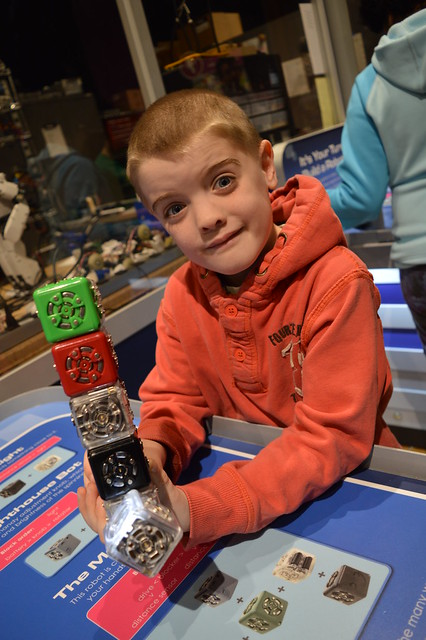 We did not stay at the Franklin Institute for an extended period simply because the crowds were unbearable.  It was good to be back after our year long break, however, and we were reminded about all it has to offer.  We look forward to more trips there this coming year but hopefully with much smaller numbers of people crammed into the space.

We decided to treat ourselves to a little luxury by dining out in the city.  Mr Pict selected The Dandelion, which he has eaten in several times with colleagues.  We were actually supposed to go there for my birthday celebration but there was a stuff up with the booking so it did not happen.  I think, therefore, that it was my Unbirthday dinner.  The Dandelion serves British cuisine.  For many decades, people scoffed at the idea of British cuisine, regarding it was an oxymoron, but British food can actually be really very good.  The restaurant is housed in what looked to have been a residential building and was decorated in a very eclectic way, a sort of ramshackle chic.  It reminded me of a mixture of junk shops and cafes from my childhood.  Of course, we loved the tastebud nostalgia of the whole experience too.  Our children immediately ordered glasses of Ribena – a blackcurrant squash from the UK – and I had a Pimm’s Cup.  There were several things I could have ordered but I plumped for the fish and chips as I was eager to see if they could make chips the way they do in Britain, crisp on the outside and fluffy in the middle, and I am happy to report that they were a very tasty success, as was the beer battered fish.  I usually only manage one course of food but I pushed my limits because there was Sticky Toffee Pudding on the menu.  I have not had a Sticky Toffee Pudding since we emigrated (I really ought to make it but never do) so I just could not resist the temptation.  Not only was the cake delicious and light and deliciously treacly, but it was also served with date ice cream.  Mr Pict and the Pictlings all loved every morsel of their two courses of food too.  Indeed, Mr Pict declared that the short rib was the best he had ever consumed.  The luxury of delectable food in a pleasant setting with great service went a long way to mitigate against the stress of an overcrowded museum and ensured that our President’s Day trip to Philly was a success. 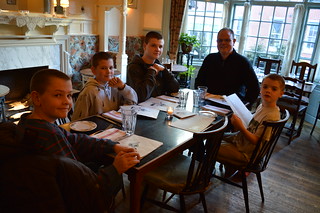 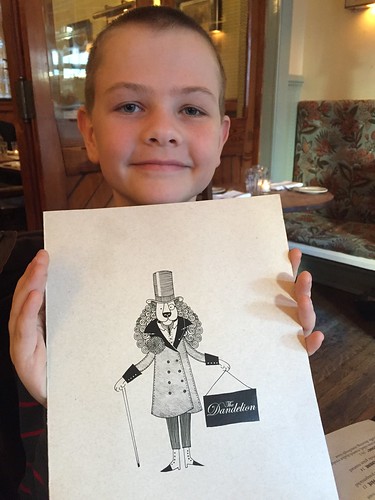 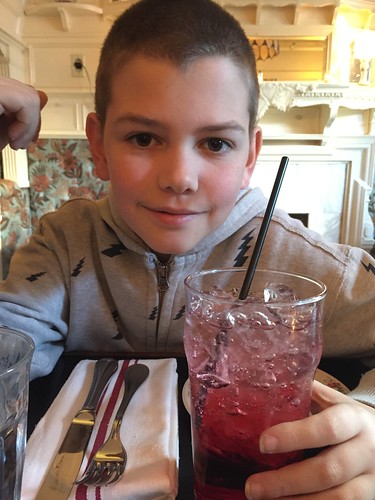 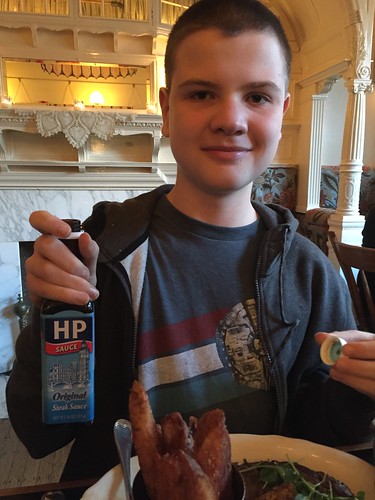