My first post of 2016 is about our final Pict family outing of 2015 when we went for an exploration of Ridley Creek State Park.  Located near Media, the park comprises over 2000 acres of land but we confined this first visit to one particular trail.  We had visited the adjacent Tyler Arboretum in April and I must admit that I was bracing myself for similar levels of moodiness from the four boys.  However, the opportunity to roam free, climb trees, battle with sticks, and generally be their feral little selves meant they were stunningly well behaved and agreeable throughout the trek.

We parked up by the Jefford Mansion, a beautiful stone built building from the early twentieth century which now serves as the park offices, and the kids immediately scurried off into what was a cross between an artificial grove and a portico of trees surrounding a formal fish pond.  They soon had it turned into an imaginative playground where heroes were doing battle with mythological monsters, twigs brandished, roaring, and racing around. 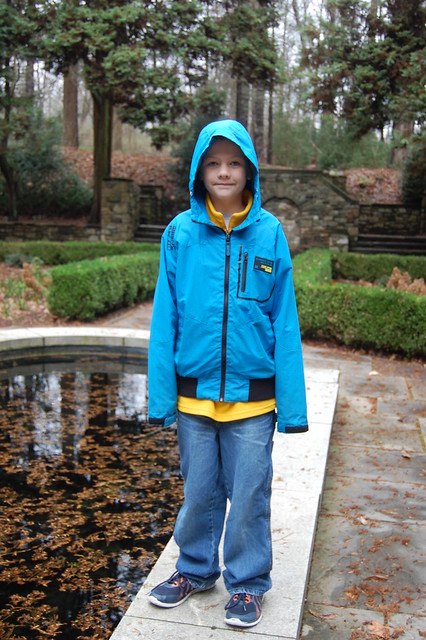 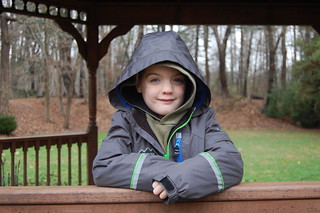 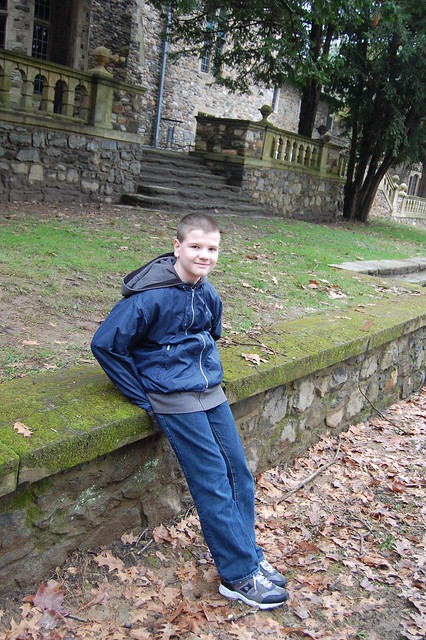 From there, we ventured into the woods.  The ground was still sodden and boggy from the previous night’s deluge of rain but we all squelched along quite happily.  There were lots of good climbing trees which the boys were soon scaling and even better were lots of felled trunks that they could shimmy along.  It soon became a competition to see who could complete an obstacle course of tree trunk running in the quickest time.  The smallest Pict is nimble, fleet of foot, and quite frankly impulsive and reckless so he easily won each and every time. 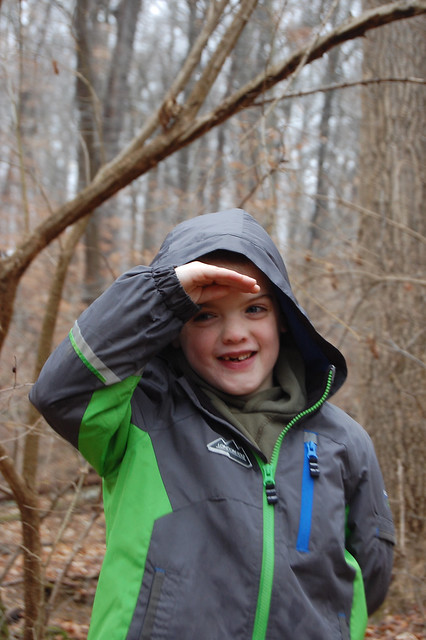 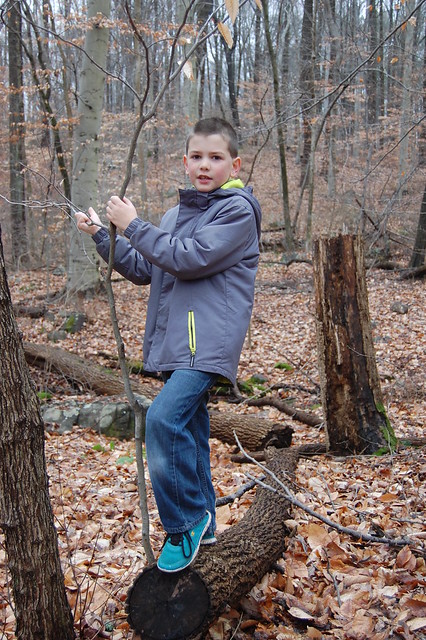 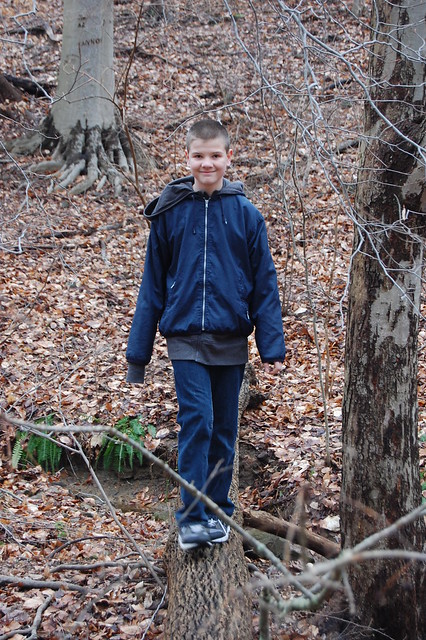 It was because of the 6 year old’s intrepid ways that we stumbled across the highlight of the trip.  We were veering off the demarcated path anyway in order to run along logs but the wee one plunged off into the woods even further and, in doing so, chanced upon the skeletal remains of an adult white tail deer. Well, you would think my boys had just discovered pirate treasure!  They have inherited my macabre fascination for decay and mortality so the fault / credit is almost entirely my own but it seems my children are rarely happier on an outdoor adventure than when they stumble across a corpse.  The body parts were spread across the clearing so they had fun trying to find all the different parts, like a slightly gross jigsaw puzzle.  The skull was the easiest fine after the spine and rib cage but the two middle boys literally jumped up and down with glee when they found the two parts of the mandible.  Each hoof was located and identified at which point my youngest son declared that the deer must be a lady because it had high heels. 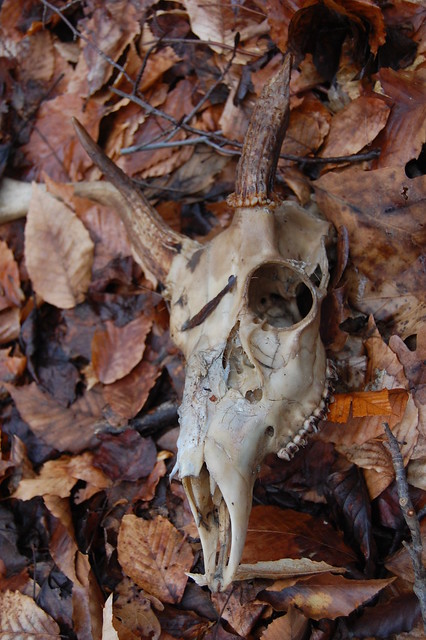 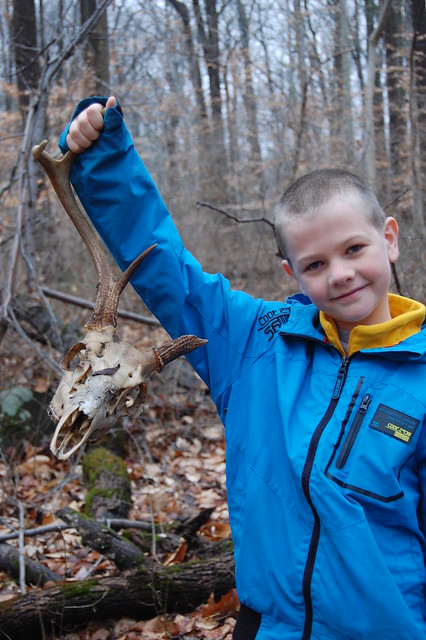 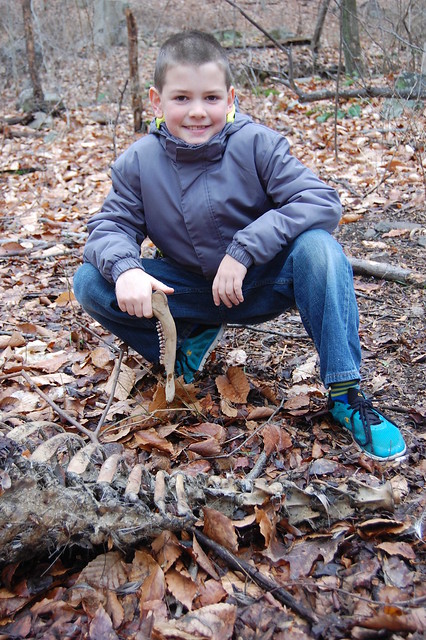 Animal autopsy over, we kept on with the looping track.  We found interesting fungi, including a lump of gelatinous brown slime, like a tree hugging sea anemone, but we did not spot any more wildlife, either live or dead.  Wandering through the woods with four loud children never presents the best opportunity for spotting critters but perhaps there was not much to encounter at this time of year anyway.  I will just tell myself that.  It is a lovely park so we will have to return in the Spring when the flora and fauna are bursting with new life once more and perhaps we can explore another trail. 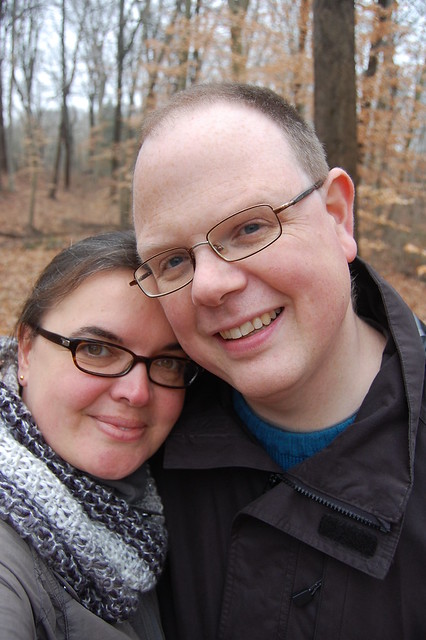