I had a page already underway in my art journal that was going nowhere in particular but where I had plonked a wine label slap bad in the middle.  I had actually intended to glue the wine label into my rainbow themed art journal but I guess I was rushing and it was late at night so it ended up in my regular art journal.  There were also some scraps of text paper already adhered to the page, leftovers from some other project.  I decided that should be the background of my silhouette page.  But then I realised that the wine label would likely end up completely covered up.  That was when I decided I would create a reverse silhouette with the surrounding area being black and the chosen shape emerging in negative rather than positive.

Something you may not know about me is that I love sharks (and whales).  It has been a lifelong thing.  I would actually dearly love to dive with sharks but its the claustrophobia of scuba gear underwater that deters me.  Despite the fact – or maybe because – I doodle sharks frequently, a shark has only put in one solitary, rogue shark appearance in my art journal.  It was a messy collage of torn paper that resulted in a rather dorky looking shark.  After adding a light paint layer over the collage, therefore, it was just a case of quickly drawing out a shark silhouette shape and then painting black into the negative space.  Quick and easy. 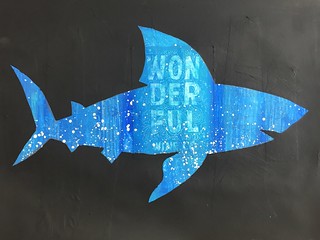