After our morning in Calistoga, we headed to the nearby Armstrong Redwoods.  We were intending to visit the Muir Woods the following morning but thought that the Armstrong Redwoods would serve as a gentle introduction for the boys and would give them an opportunity to be a bit feral.  On a hot and sunny day, it was lovely to wander in the shade and cool of a grove of gigantic trees.  These type of sequoias are native to the Pacific coast and would once have covered a much greater expanse than they now do.  This species of trees are the tallest living organisms on the planet and it is possible for them to grow to be two thousand years old – though most are bright young things at just several hundred years old.  They can be 16 feet in diameter and can be over 300 feet tall.  It is impossible to convey the scale of the trees and my photography could not capture it accurately either.  I found it very peaceful to walk among these towering giants – well, as peaceful as a mother of four can ever feel – and looking up towards the canopy made me feel dizzy from the perspective. 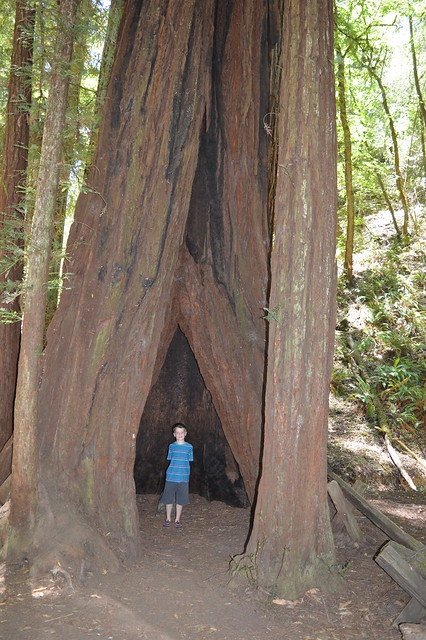 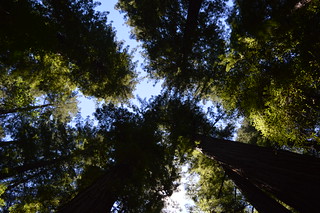 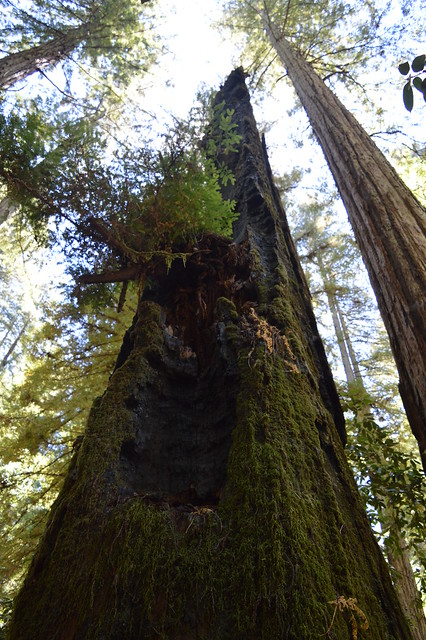 We visited the Colonel Armstrong tree.  At about 1400 years old, it is the oldest of the trees in the grove.  It takes its name, of course, from the man who decided to preserve this woodland and for whom the park is named.  The tallest tree in the park, meanwhile, is the Parson Jones tree.  It stands at 310 feet. 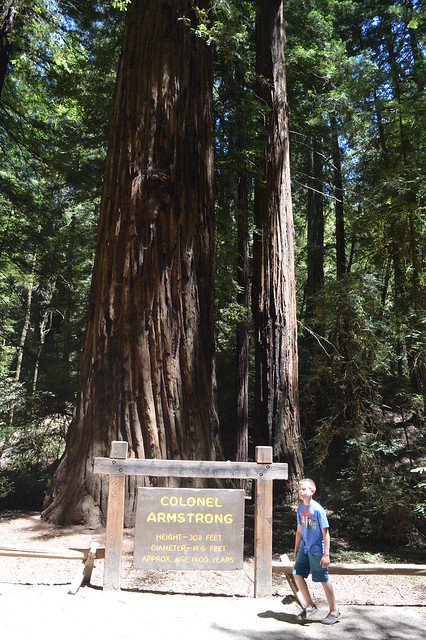 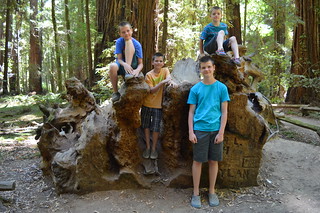 There is an easy trail to follow around the park and which led us past the most notable trees.  The icicle tree is one that has unusual burl formations on it.  Strangely enough, these burls – which are apparently incredibly heavy – grow in icicle shapes.  These are a way for the tree to grow downwards, I think, though I am far from certain.  People like to saw them off and use them to build furniture, though obviously the ones in the park are now protected.  The icicle tree is fenced off precisely because vandals have made off with its famous burls in the past.  We also found a few trees that had “goosepens”.  These are little caves inside the trunks of the gigantic trees.  The boys loved that they could all climb inside the interior of a tree.  It’s the type of place they would make into a gang hut if we had redwoods in our garden.  They got their name because apparently early settlers could keep their geese and other domestic animals inside the caves as natural enclosures.  The caves form when the trees are damaged, including by forest fires.  Since redwoods are fire resistant, they smoulder in unusual ways and I guess these hollows are the result if a tree already has a “wound”.  There was also a slice of tree with the rings marked for various historic events to illustrate just how many hundreds of years these redwoods can grow for.  There were also a number of trees that had fallen down and been left to become a different part of the ecosystem and massive stumps where trees had been felled.  These trees gave my boys ample opportunity to climb and jump. 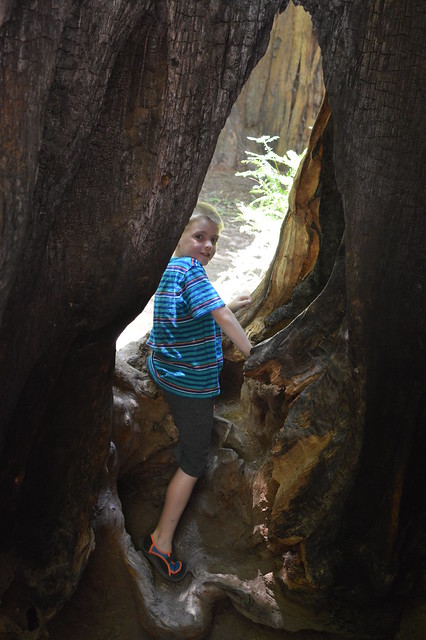 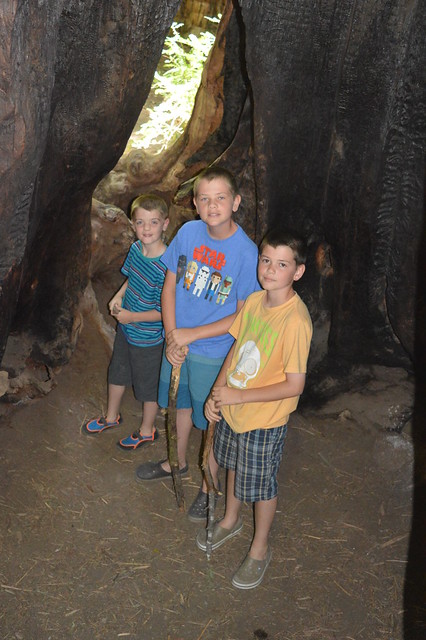 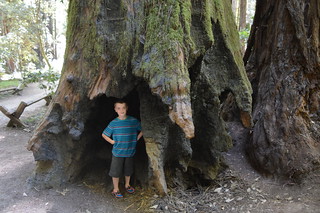 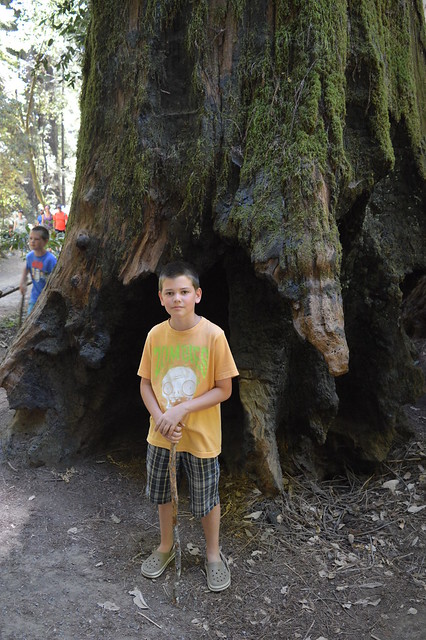 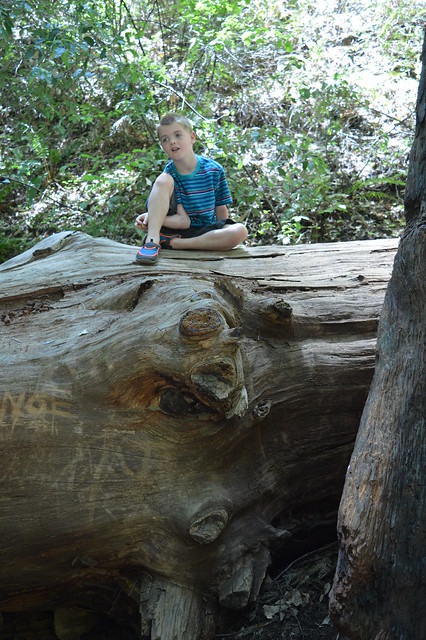 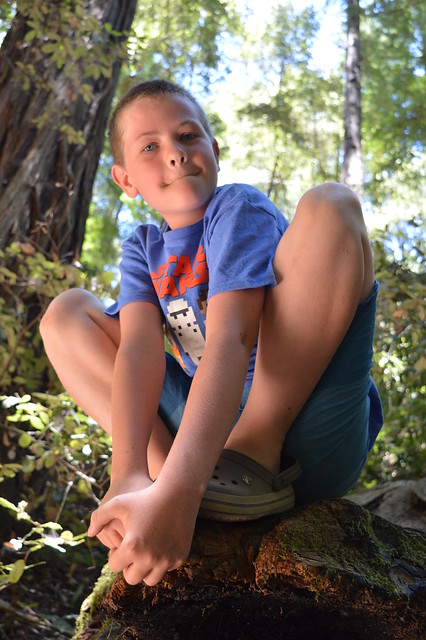 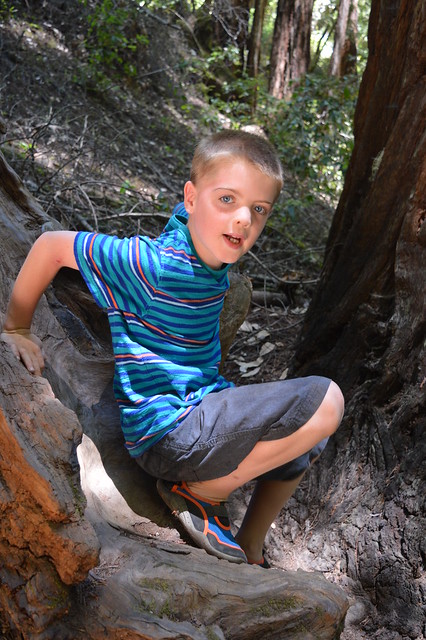 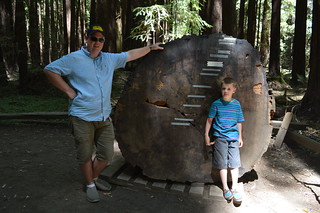 Hungry after our walk outdoors, we ate a mundane meal with indifferent service in a nearby town.  It had looked like such a promising place to eat too so that was disappointing.  Still, it filled a hole and stopped the children from getting hangry and it set us up for our final trip of the day: Bodega Bay.