If you have followed my explorations into art journaling and mixed media for long enough. you will know that one of the things I keep meaning to do – yet never seem to get around to – is to develop my typography skills, research and try new styles, make the writing in my art work more creative.  I have adopted a different style once or twice in this past year but generally I keep on defaulting to my own handwriting.  I was, therefore, very happy to learn that the lesson for week 3 of Life Book was all about typography as that meant an opportunity to practice a skill I had been keen to hone.

The lesson was taken by Joanne Sharpe, who is famed for her whimsical lettering.  I am obviously not going to summarise the lesson in this post because, of course, Life Book is a fee paying course and the lesson is Sharpe’s intellectual copyright.  However, the thrust of the lesson was that one should just use one’s own handwriting as the scaffolding for typography in mixed media art work.  So instead of feeling lazy for constantly defaulting to my own handwriting I should be embracing that.  It was like being given permission to stop berating myself over never getting to that To Do item on my lengthy list of art projects.

I followed the lesson closely for the most part.  I do not own any of the pens that were being recommended in the tutorial but my trusty old Faber-Castell Pitt Pens did the job.  I did not use the suggested doodles but instead did my own thing with a bunny and birds, some leaves and acorns.  I think I was pondering my Into The Woods art project which has gone dormant from lack of free time.  I have been using muted versions of jewel colours in my art work a lot lately – the same palette I used in my Advent twinchies – and I used them again in this piece.  I must push myself to use a completely different palette next time, however.  Maybe even use some colours I rarely use. 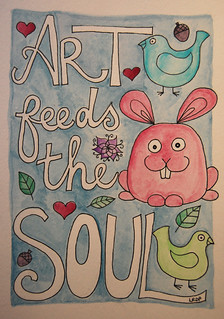 I am quite pleased with how this exercise turned out. Certainly it was liberating to actually be directed to use my own handwriting rather than thinking I was copping out.  Maybe my doodles could have been more sophisticated but then maybe the painting would have been less me.  Daft plump bunnies and geeky birds are me.

I have finally made a decision about my next art challenge.  It is going to be “Into the Woods”.  That theme allows me enough scope to work in different media and cover a wide range of subjects.  Since my last art challenge involved a lot of time pressure, I am not going to impose a timetable or deadline onto it.  I will just create whenever my artistic mojo strikes but I will – mostly – create in response to this theme.

My first work on this theme was a lino block print I have titled “Worried Bunny”.  You can read more about it here. 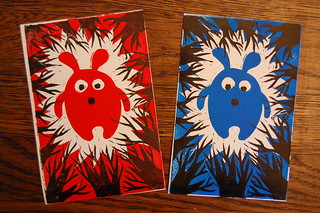 I will be sharing the art I produce in response to this theme on my art blog, Pict Ink, so make sure you visit there if you want to see more.