I had oral surgery just over a week ago – annoyingly two days before I took my Oath of Citizenship – and unfortunately experienced some complications which have prolonged my recovery process and caused an exceptional degree of pain.  I am trying to be stoic but it has been really pretty miserable.  I am very much looking forward to being pain free and being able to eat foods that are not liquid.  Consequently, I have not been able to do much or accomplish much but I did think that some time spent pootling around at my art table would be restorative.

Not having much capacity for creative mojo in my current state, I decided to use a couple of Art Journal Adventure prompts to create an art journal page.  I chose one involving altering an existing image and one that was the letter Q.  I used a page out of a fashion catalogue as my starting point.  The previous owner of our house must have been a big catalogue shopper as we still get loads of them in the mail, addressed to the occupant of the house, most of which I plop straight into the recycling bin but some I keep as collage fodder.  I filled the gaps around the selected image with more scraps of catalogue page and some washi tape.  Then it was time to add paint and start altering the image. 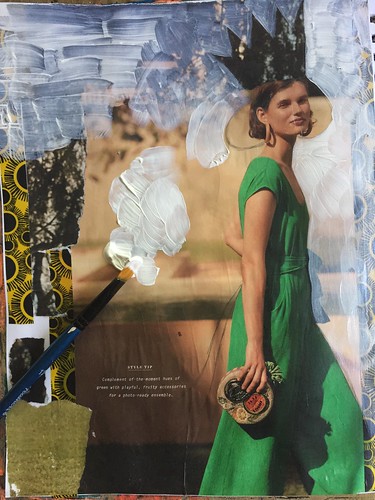 I decided that Q was be for Queen and from there I decided to make the figure a Queen Bee.  Given the context of my physical condition, I kept things super simple.  Just a layer of paint, enough to alter the image and suggest the bee idea.  I had some washi tape with gold hexagons on it which was perfect for this project since the gold tied into the crown and the hexagons suggested honeycomb.  And that was that.  Quick.  Simple.  Done.  And a welcome distraction from my agonising jaw. 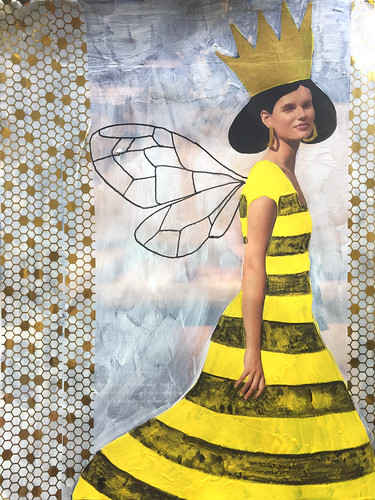