For  most of my life I have told people that I can draw but I cannot paint.  Whereas I could control my drawing tools to produce something approximating the vision I had in my head, I was always entirely cackhanded when it came to manipulating paint.  Of course, this was a little self-perpetuating since I would choose pencil, charcoal, and ink over paint each and every time so one set of skills continued to grow while the other atrophied.  It was when I emigrated to America, almost three years ago, that I thought to myself that I might try my hand at painting again – a new challenge for the new chapter in my life – and that was how and when I embarked on art journaling and exploring mixed media.

Since then – and particularly since joining Life Book – I have tried to develop my skills with paint and grow my self-confidence.  It has been frustrating.  For every couple of steps forward, I have at taken at least one step backwards.  My ability with paint continues to be patchy, inconsistent, outwith my control.  There have been times I have looked at a finished piece, many times actually, and thought to myself, “Well actually maybe I can paint”.  But then there are the times when I take so many steps backwards that I feel like perhaps I am investing my time in energy on attempting something that is not progressing.  Today I am back to thinking that maybe once again I can draw but I cannot paint.

Last week’s Let’s Face It lesson is a case in point.  The lesson was taken by Jeanne-Marie Webb and was definitely a more painterly approach to depicting a face and figure.  The idea was to use more neutral tones – I used raw umber, raw sienna, unbleached titanium and a little cadmium red – and that was something that really appealed to me.  It took me all week to actually find time to tackle the lesson but I was really looking forward to giving it a try.  I made a complete mess of it.  By way of illustration of my previous point about my abilities, I will share the photo of the drawing beneath the painting.  Despite the spectral quality of the eyes being complete blanks, I rather like the drawing.  It certainly suggests potential for something interesting and – had I been working in ink and watercolour – I think I could have pulled it off.  However, almost as soon as I added the acrylic and began layering the paint it all went pear-shaped.  All the features drifted, became wider and chunkier, the blending got messy and patchy, and the tones became muddy and murky.  And let’s not even mention how awful my painting of flowers is.  Sigh.  If I had the luxury of time, I would be tempted to layer more paint on top of this and see if I can pull it back and refine it.  However, I don’t have time so shall let it be as it is, a testament to many steps backwards in my attempt to learn to paint with acrylic and use mixed media, and maybe it will some day be a yardstick of how much further forward I have progressed.  For now, however, it is still the case that I can draw but I cannot paint. 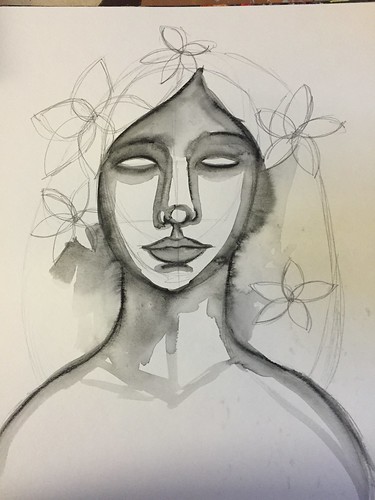 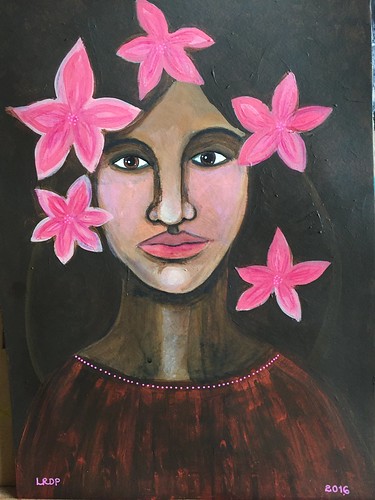 The first lesson of Life Book 2016 was a warm up exercise taken by Tamara Laporte.  It involved lots of layering with different techniques and media and also involved using our word of the year and a symbol that resonated with that word.

Until last year’s Life Book, I had never set a word of the year but it was a concept that intrigued me.  Last year I chose Balance as my word and it was interesting how much it helped me to have that as a focus.  Every time I, for instance, felt assuaged my guilt over sitting and doing some art rather than dusting I could remind myself that I was striving to build some balance back into my life and that involved making time for myself and investing in myself.  I was not striving for anything as ridiculously impossible as a 50/50 balance, was not looking to have more than a reasonable amount of “me time”, nor did I want my investment in myself to impinge on family life, somehow interfere with my role as a wife and mother.  However, my life was way out of kilter to a degree that I was discombobulated.  Having the word “balance” in mind and setting that as my goal for 2015 really did help me strive to achieve that and ultimately I did attain much better balance in my life.  I also realised through that process that even though I am constantly juggling a whole lot of balls and have a whole lot of different things that I am trying to keep in balance, it is absolutely OK for me to drop some of those balls.  There are glass balls that are precious and vulnerable and too special to drop so those are the ones to focus on but if a few of those rubber balls fall – if the dusting doesn’t get done, if I make quick and easy pasta for dinner instead of the meal I had intended – that is OK.

This year, therefore, I thought long and hard about the word I wanted to set myself for the year.  I thought long and hard and came up with nothing.  I knew all of the things I wanted to achieve this year, the things I needed to tackle, overcome, things I needed to develop, but I could not distill that down into one word or even a pithy phrase.  Finally, a friend suggested a word for me that encapsulated all of the things I was trying to concentrate into my focal point for the year: Momentum.  My focus for this year is about taking the things I started last year, things in several areas of my life, and driving them forwards.  There are things I really need to dig deep and fight to achieve, things I need to advocate strongly for, and there are things I want to gradually develop and refine and hone.  Momentum works for both those drives and I like that it is a positive word that still chimes with some of the negative stuff I need to battle through.  So Momentum it is. 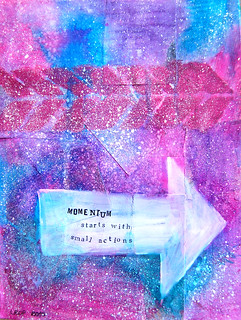 It is interesting for me to compare the warm up piece I did for this year’s Life Book with the piece I did for Life Book last year – my first ever online art lesson indeed.  Evidently, layering is something I still struggle with.  Stencilling definitely continues to be my nemesis.  However, I managed to build up the colours to be much bolder and I have also learned to have a much stronger focal point in much more abstract pieces – even though my arrow symbol went badly wrong because of the spray inks getting under my masked shape and reactivating all over the place.  Baby steps is still progress though.