On Saturday, Mr Pict and I took our four sons to participate in the Women’s March event happening in Philadelphia, one of many marches happening across the country and around the world. 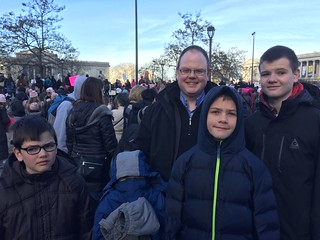 As a result of my Gran’s passion for politics and issues, I started attending protests, marches, and demonstrations when I was tiny, maybe five years old.  I have attended scores of such events over the years but then I developed an anxiety problem related to crowds that prevented me from attending any large events, from music festivals to rallies.  I could not join last year’s Women’s March anyway because I had to work but this year I decided to push myself past my crowd anxiety for a number of reasons: I wanted my sons to have the experience of this form of civic engagement and understand how they can utilise their privilege for the benefit of others; as someone not eligible to vote, it is one of the few opportunities for me to stand up and be counted; and most importantly, I am an advocate for civil and human rights, social justice and equity so I felt compelled to go there and represent not just myself and my family but also be there to support all those who could not attend for reasons of mobility, finance, logistics, or personal safety. 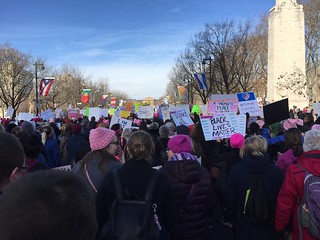 The event was superb and very well-organised.  The atmosphere was energising and inspiring.  Although there were tens of thousands of people there (I read an estimate of 50,000 people), the route up Benjamin Franklin Parkway was wide enough that I never once felt hemmed in enough for my crowd issue to spark my anxiety.  The boys were great and enjoyed reading the placards that so many people were carrying and listening to the chants along the way.  Our ten year old is particularly engaged in current affairs so he especially enjoyed the experience of participating in democracy in this way.  The march ended in front of the Philadelphia Museum of Art and it was there that we listened to various women delivering powerful speeches about the importance of engagement, participation, and activism.  It was also thought-provoking and challenging and, given I am a white woman, prompted some self-reflection on what more I can do to channel my privilege for good.  I am so glad that we went and added our voices to the throng. 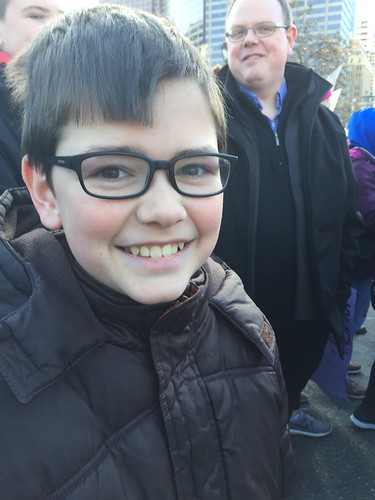 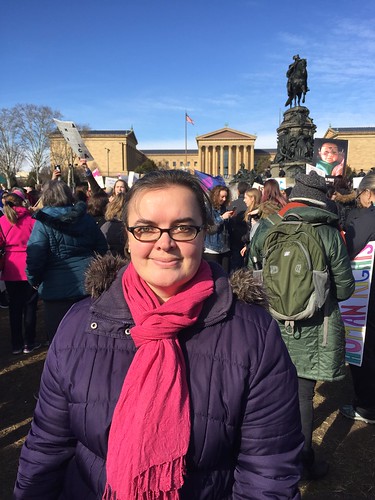 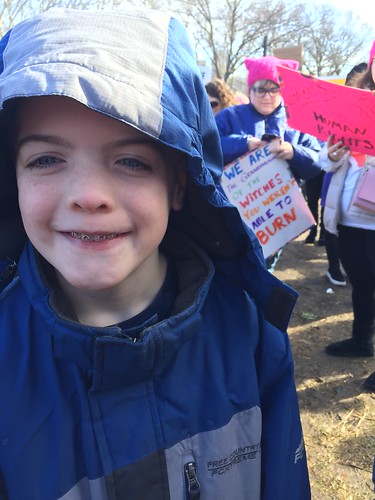 I am sure it has not escaped your notice that something momentous is happening today in Scotland.  A Referendum is being held in which the populace is voting as to whether Scotland should remain part of the United Kingdom (a No vote) or become an entirely independent nation (a Yes vote).  The Act of Union which bound Scotland to England took place in 1707 so this is an incredibly historic decision.  I am not going to get into all of the nuts and bolts of the debate here.  That is not the nature of this blog and, besides, other bloggers are probably better placed to analyse and present the arguments than I am because opinion pieces are not my personal style of writing.  No, I am writing about this now on my blog simply because it is an incredibly weird experience to be looking in from the outside on something happening within my country, to be so politically aware, and yet not be part of the process.

For months now my Facebook feed (the admittedly lazy means by which I keep in touch with friends and family on a regular basis) has been chockablock with discussion about the Referendum.  People have offered opinions and arguments, shared links to articles, video snippets from the campaigns and seeing how engaged everyone has been in political discourse has been a delight.  An astonishing 97% of the eligible population has signed up to the electoral register making this a record electorate.   Considering that in recent elections in Scotland the turn out has been woeful, abysmal even, the fact that a high turn out is being predicted (on top of the already huge number of postal votes), the fact that this Referendum campaign – for all that it has been a shambles on both sides at times – has lit a fire under people and inspired them to be active participants in the democratic process again is simply fantastic.  It is a massive decision.  It absolutely needs to be a democratic one and for democracy to function effectively every single voice ought to be heard.  People fought and died to earn us the right to vote and I am very glad to see people finally appreciating the fact that their vote is their voice.  I am also already proud of the fact that Scotland has seen fit to extend the franchise to 16 and 17 year olds for the first time, something I have held to be just for a long time.

However, I do not get to be part of this historic Referendum.  Quite appropriately, residency is the qualification for voting, not nationality.  As a Scot who is no longer resident in Scotland, I do not get to vote.  Indeed, I no longer get to vote anywhere.  I am effectively voiceless, though filled with political opinions.  Watching this whole campaign unfold from afar has been a stark reminder that I am now part of the diaspora.  It is a bizarre feeling, somewhat unsettling since I am also now outside the democratic process generally.  There was a period in my life when I was deeply involved in Scottish politics (never more so than during the Devolution campaign) and now I am not involved at all when Scotland is in the process of making the biggest political decision ever placed before it.  It’s weird.

I await the result on tenterhooks and meanwhile The Proclaimer’s song ‘Letter from America’ is playing on repeat in my head.

My youngest son’s preschool is serving as a polling station today.  At both drop off and pick up I was asked if I was there to vote and both times I explained that, sadly no, as an immigrant I was not entitled to vote.  This is a difficult thing for me.

My Gran was intensely, fervently, obsessively political.  She had stridently held opinions on every subject and she was politically active in trying to change the things she believed needed to be changed.  Some of my happiest childhood memories of time spent with her involve being at protests and on rallies.  I suppose, therefore, that I learned to be politically engaged at her knee.  My family taught me early on how important it was to actively participate in democracy, that to not cast a vote is to undermine the very principle of democracy, to inform yourself and to cast your vote accordingly.  People fought and died to earn me the right to vote and I should wield that right and be thankful for it.  In due course, I registered to vote as soon as I was old enough to do so and cast my first vote as soon as I was able.  In my entire adult life, I have only failed to vote once – in a local election because I was in hospital having a baby.  I think that might be a reasonable excuse, maybe even one my Gran would have permitted.

When my husband and I were discussing the pros and cons of moving from Scotland to America, therefore, one of the items on the list was the fact I would not be able to vote.  I would be abiding by and controlled by the laws of and paying the taxes to a country I had no electoral power in.  As a resident and especially as the mother of four children, I would have a stake in a country but would have no political voice.  That was a Big Deal for me.  It became part of my difficulty with feeling like a Non-Person upon arriving here.  Like my Gran, I have passionately held views and opinions, values and beliefs, and it is frustrating to not be able to invest those in moulding the future of a state and nation I am now raising my children in.

I am very liberal and left wing.  I am a socialist who believes to the core of my being that the haves and the cans have a moral obligation and a social duty to support and protect those who have not and who can’t.  I am against capital punishment, for equal rights across the board, pro gun control … an endless list of issues on which my new homeland and I are somewhat out of synch.  Right now I have no ability to shape the laws in regard to any of these core issues.  When it comes down to brass tacks, I cannot even vote for the local dog catcher let alone who nominally represents me in Congress, the Senate or the White House.

If and when I take up US Citizenship, it will primarily be motivated by my desire to vote, to participate fully in the democratic process once more, to have my say in a country I now have an important stake in.  For now, however, I just have to hope that the winds of change and the franchise being taken up by each new generation might move things along in a direction that more accords with my stance on key issues.  On that note, today a Federal judge struck down Pennsylvania’s ban on same sex marriage.  That I now live in a state that recognises marriage equality makes me very happy indeed and gives me hope in more ways than one.  Today, therefore, at least feels like an easier day on which to be disenfranchised.