Christmas was always going to be very different for us this year as we have always spent that time with the boys’ grandparents.  This year it was going to be just the six of us.  While clearly missing out on some of our family traditions as a result, my husband and I decided to spin that into a positive opportunity to establish some Pict family traditions of our own, tailor Christmas to the six of us, and determined to fuse established rituals and habits and fuse them with new experiences which – if successful – could become traditions to carry forward into future festive seasons.

By coincidence, as we were discussing this plan, I was invited by my six year old’s teacher to talk to her First Grade class about Christmas in Scotland as part of their “tradition trade”, and that gave me an opportunity to synthesise what the key customs were from our own family and cultural background, focusing on the ones that were most important to carry forward.  Of course, most things are just the same as in the US – letters to Santa, stockings hung on Christmas Eve and snacks left out for Santa and the reindeer.  Traditionally in Scotland a turkey or a goose would be the centrepiece of the meal but we decided that, so soon after Thanksgiving and with the price of them, we would have a plump chicken instead.  We definitely wanted to have roast potatoes and roasted parsnips which led Mr Pict on a quest all over town trying to find some.  I am assuming those are not such a popular root vegetable in America.  The kids in the class had just about heard of them though only my own child could recognise them in the photo.  Shame because parsnips are actually my favourite vegetable.  Mr Pict and our 8 year old also wanted brussel sprouts.  To me they smell like sweaty bum crack (the word for which is a shuck in Scots as in “If ye didnae hae a shuck ye’d droon”) and taste acrid and bitter.  But they are traditional and so they too were purchased.  Normally there would be Christmas pudding (round and steamed and served ablaze) and Christmas cake (hard, dry fruit cake covered in a layer of marzipan and icing) but none of us really appreciate those so we continued our own tradition by opting out of those and having different desserts instead.  As you will gather, reader, most of our festive rituals revolve around our mouths and stomachs.  One thing I thought I would have a hard time finding in the US was Christmas crackers, as I know they are not part of the festive culture here.  For the uninitated, these are tubes of thin card covered in cheery paper and closed at each end and, when pulled, they make a bang and the contents are revealed, said contents being a paper crown (which it is compulsory to wear), some wee toy or item, and some corny jokes.  I was so thrilled to find some in a local discount store that I literally jumped up and down with glee as I snatched them off the shelf.

Here’s my 6 year old pulling a cracker with me over Christmas dinner: 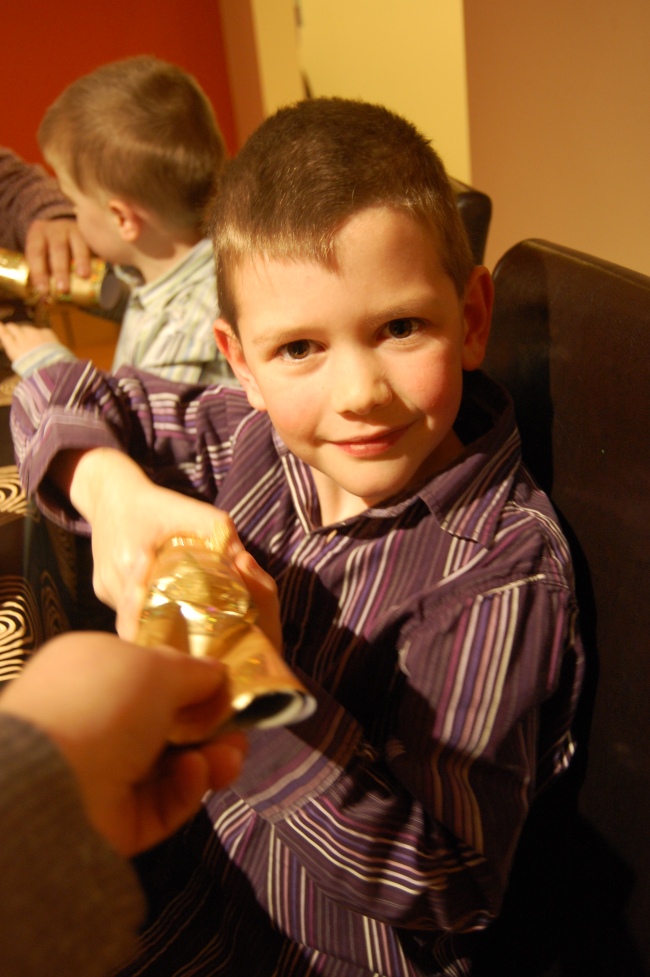 And this is my husband and me wearing our cracker crowns: 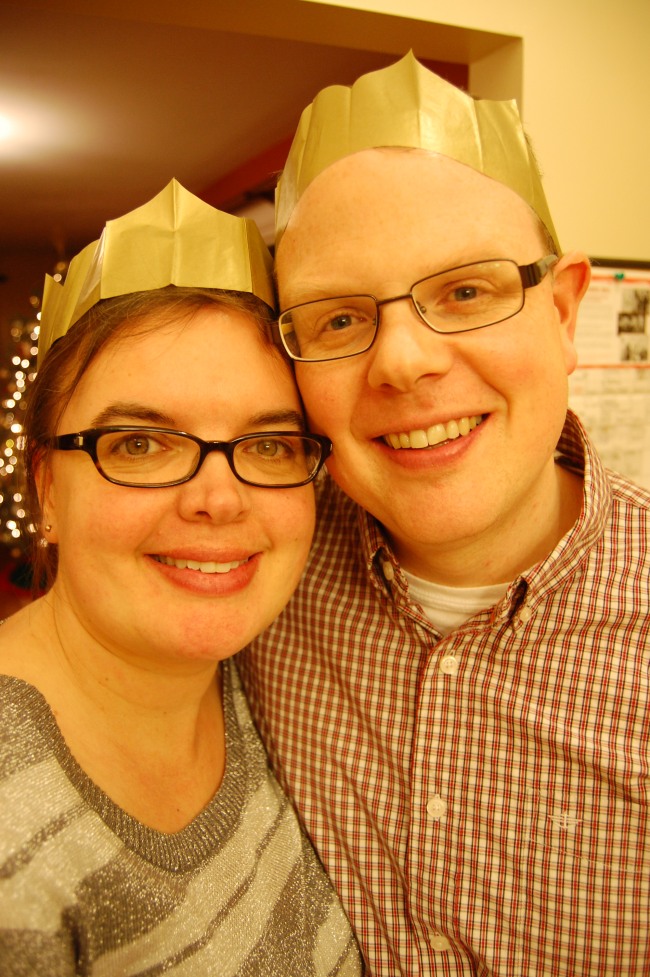 So those were the old traditions; now for the new.

The first was not of my own design.  It was part of the Elementary School’s programme and something I understand is done in schools up and down the land – but it was new to us, of course, and that was Polar Express Day at school.  I have a love-hate relationship with the movie ‘Polar Express’ (I’ve never read the book) in that I like the concept of taking a journey to rediscover the magic, wonder and joy of belief but to my mind that is rather undermined by the dead-eyed mo-cap animation of the human characters, some of the misery being just too cold and gloomy and the fact the central character is difficult to like.  Not my thing it’s fair to say.  My triumvarate of Christmas movies are ‘Nightmare Before Christmas’, ‘Muppets Christmas Carol’ and ‘It’s A Wonderful Life’.  The last day of school before Winter break was designated as Polar Express Day so the boys went to school in their jammies, had hot chocolate and other treats and made crafts and generally had festive fun.  It was a charming way to end the term.  I am glad they could be part of that tradition.

The weekend before Christmas, we took the boys to a nearby Holiday Light Show.  It was at the same farm where we had experienced Halloween fun and purchased pumpkins so it covered a vast area.  We drove through the Light Show which was fun and cosy.  We each oohed and aahed over each design.  Some of the designs were really elaborate, with lots of mobile elements or animations, but the simple ones were also very effective.  There were themes as we drove through, starting with designs indicating corporate sponsors, the Twelve Days of Christmas, fairy tales, the nativity, world landmarks and animals.  My favourite part was driving through a tunnel of twinkling lights.  It made for a lovely evening and next year we might even stay longer in order to toast marshmallows over the fire pits but we had not had our dinner so we went for a nosh up at Cracker Barrel instead. 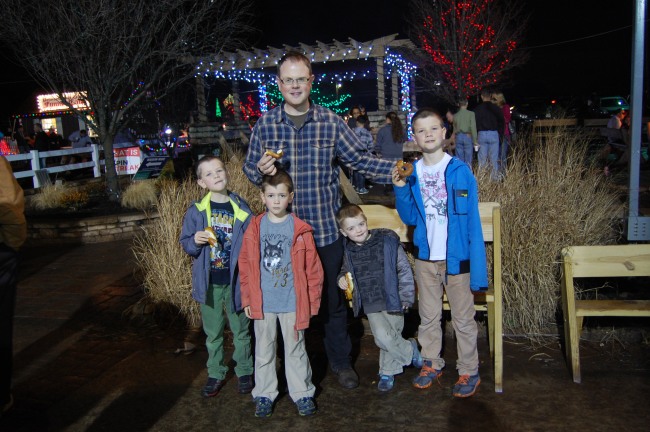 We’ve always done the tradition of new jammies as a Christmas Eve gift because, frankly, I want the kids to look decent in the photos of Christmas morning as well as giving them some new pyjamas just because they could do with them.  This year, however, we upscaled the Christmas Eve gift a little.  I bought each of the boys a Christmas tree ornament that was perfect for them in order to serve as an annual reminder of their first Christmas in America, the idea being they would then have it to start their own individual collections of tree ornaments when they eventually grow up and leave home.  Mr Pict’s contribution was to forage for some European sweet treats for us to munch along with some luscious hot chocolate.

In the end, all of our forging of traditions old and new worked a treat and we had a superb Christmas.  We were relaxed and content throughout the day and most of all the boys were blissfully happy and that ultimately was the critical thing.  We were striving to make their first Christmas in America a memorable one and that mission was accomplished. 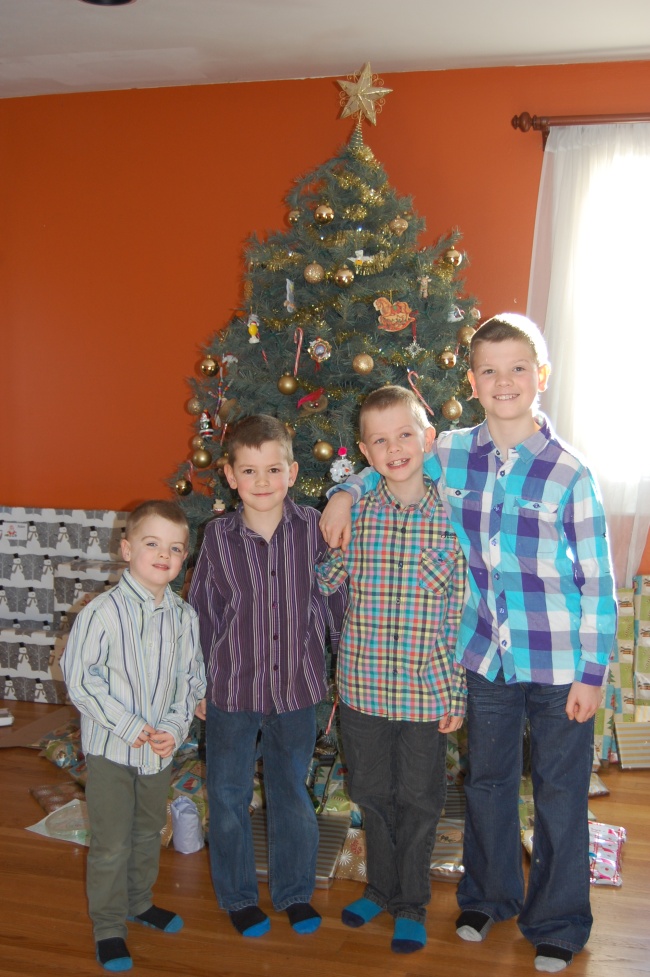