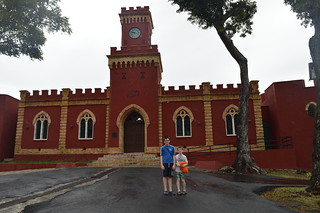 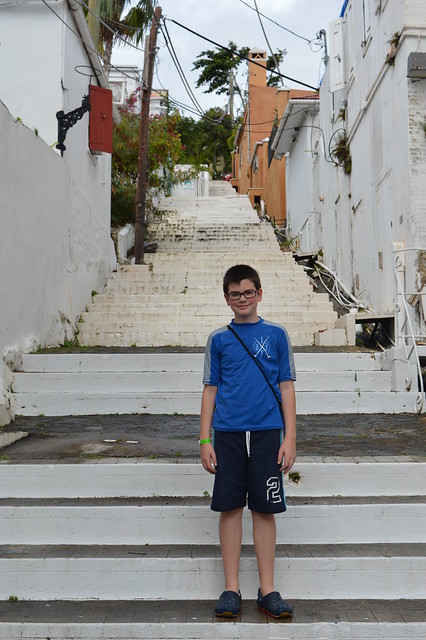 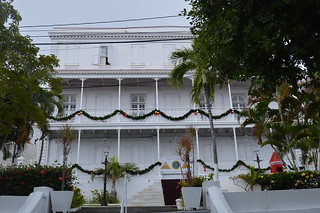 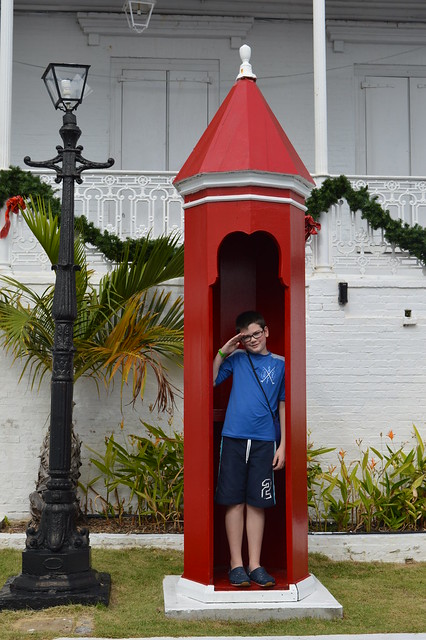 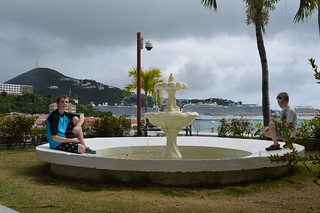 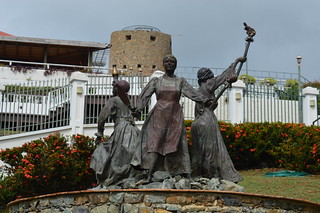 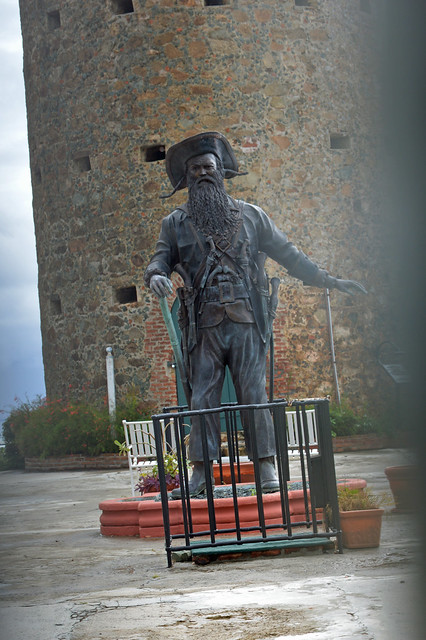 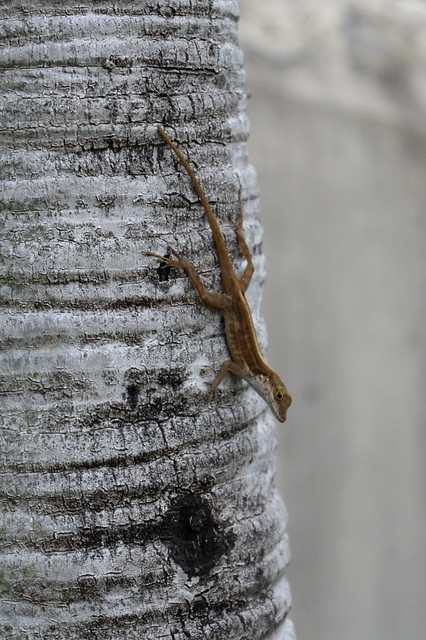 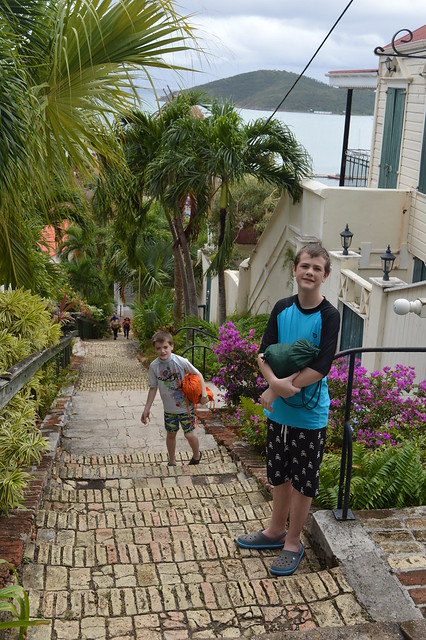 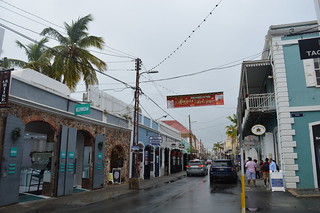 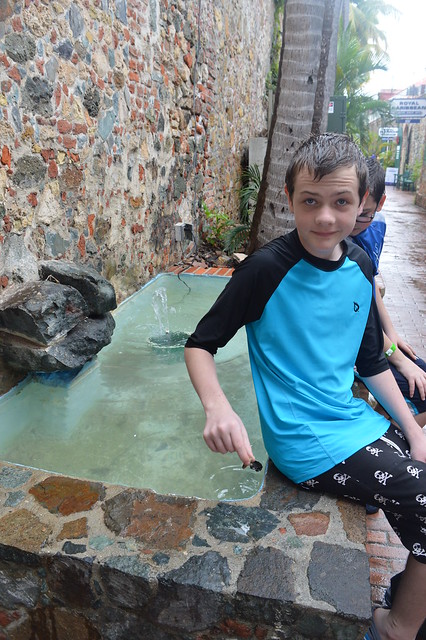 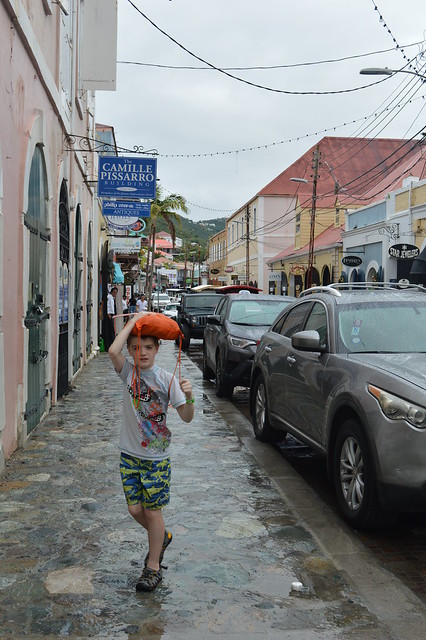 Knowing that the next few weeks are going to be a slog because of moving house and the kids returning to school, we decided to dedicate yesterday to being a fun family day out.  Fort Mifflin was a place a few people had recommended to us and they happened to be throwing a pirate day so that seemed like a good option to pursue.  Two of our kids even got into the spirit of things by dressing up as pirates for the day.

Fort Mifflin is sited on an area of land named Mud Island.  Originally called Fort Island Battery, it was built in the 1770s on the Delaware River.  Nowadays that places it right next door to Philadelphia Airport so that large aircraft skim over the top of the Fort and there is a constant thundering, rumbling noise from all the take-offs and landings.  During the War of Independence, the British had bombarded Fort Mifflin following their conquest of Philadelphia – which was then the nation’s capital.  Following Independence, the American Army took over the fort and rebuilt it and it remained a military possession until the middle of the twentieth century when it was handed over to be a historic site.  Something that appealed to Mr Pict about the site was that it had housed prisoners during the Civil War.  However, the only time the Fort was ever involved in any sort of conflict was when it was besieged in 1777.  The American troops, far outnumbered by the British, managed to hold the fort for long enough for the Continental Army to reposition themselves.  I am not confident enough in my knowledge of military history to declare whether that was significant to the ultimate victory of the Americans over the British but clearly that was the most important episode in Fort Mifflin’s own history.

Another famous episode in Fort Mifflin’s history concerns the imprisonment of William Howe.  He was a Union soldier accused of desertion and murder during the Civil War.  While incarcerated at Fort Mifflin, Howe organised the escape of over 200 fellow prisoners.  He failed.  After spells in solitary confinement and at Eastern State Penitentiary, Howe was transferred back to the Fort in order be executed.  People actually paid for tickets to watch him be hanged.

But where are the pirates in this history of the Fort?  Hmmmm.  Well I suppose very vaguely it can be argued that the Fort was built at the confluence of the Delaware and Schuylkill Rivers because it was an important trade route that needed to be protected and that, therefore, it might well have had to defend against pirate attacks.  Really though I think it is just a fun event for kids because really what kid (or adult) doesn’t love pirates?

We arrived just in time to watch some reenactors dressed as redcoats and militia men have a battle with some pirates.  The boys enjoyed watching all the skirmishes complete with loud explosions from smoking muskets.  Afterwards we chatted with some of the people portraying the soldiers and it turned out that two of the young men were from Nottingham in England.  One now lives locally and the other was on a two week vacation to visit his friend so had been enlisted to fight for the British and defend the fort.  Their kit was pretty serious and many of them were very immersed in the history, rattling off facts about American military history in great detail.  Mr Pict was in his element.  I rather suspect that if he ever has the time to do so, he might get involved in either a reenactment group or as a docent at some historical site.

The kids loved exploring all of the tunnels that run into and under the Fort’s incredibly thick stone walls.  Some of the tunnels were fairly large and opened up into rooms that functioned as either stores or casemates.  Other tunnels were narrow and shallow and were for storing explosives.  The boys especially enjoyed the really dark tunnels, especially if we didn’t switch the torches on and were immersed in complete pitch darkness.  We also walked the fort’s walls to get better views of the layout of the various buildings within the walls and also views of the river, which was very busy with cargo ships, and across to New Jersey.  The kids were also able to participate in a lesson on throwing mortars by chucking water balloons at a plastic box representing a defensive position, thus learning that it was more effective to throw over the wall than at it.  We also spent some time in the pirate’s lair listening to them performing sea shanties, one of which was set to the same tune as the traditional Scottish folk song ‘Ye Jacobites by name’.

The kids had been given a Scavenger hunt sheet to complete.  It listed items that could be found either on soldiers or on pirates and, once identified, the person who possessed each item had to sign the sheet.  All very official for pirates!  This was a great idea as it not only got the kids involved in looking at the detail of the costumes and equipment but also led us into chats with the knowledgeable people portraying the historical characters.  The pirates proved to be very hospitable, inviting us into their den and giving us a tour of their weapons and equipment.  The pirate captain even tried to recruit our youngest son as a crew member.  We also discovered that one of the pirates was originally from Glasgow and he was delighted to have a conversation with a fellow Scot.  Once the list was completed, we popped into the site shop where the kids were each rewarded with a miniature Fort Mifflin flag, which had originally been the flag of the Continental Navy, its thirteen red, white and blue stripes representing the original American colonies.  The kids were delighted with their prizes.

Therefore, despite the fact that pirates only have a very tangential relationship to the history of the fort, just a sliver of relevance, the kids actually absorbed a lot of learning and new vocabulary without even realising they were doing anything but have fun.  And they always rooted for the pirates.