Our children had gone to Virginia to spend Spring break with their grandparents, who had flown over from England. On the Tuesday, Mr Pict and I were able to travel south to join them.  As regular readers of this blog will know, my husband is a Civil War nerd.  He was, therefore, relishing the prospect of spending some time mooching around Civil War sites in Virginia, though he agreed to restrict himself to the Peninsula Campaign of 1862 for this trip.  On our journey south, needing a comfort break, he selected the National Park visitor centre at the Tredegar Iron Works.  While I availed myself of the restroom, Mr Pict undertook a warp speed visit of the visitor centre and determined that we should return some time with the kids.  It was largely determined that Richmond should serve as the capital of the Confederacy because of these iron works so it is a significant site.  I did like that the visitor centre was housed within such a historic building. 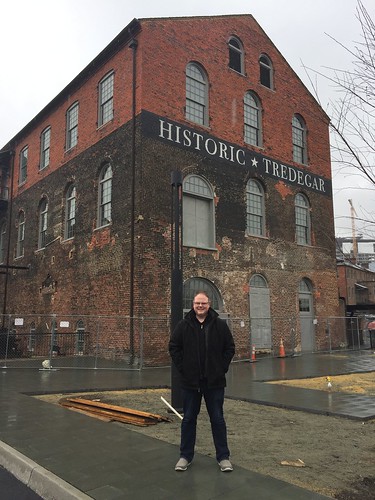 The next morning, with the four boys and my in-laws in tow, Mr Pict took us on a tour of Civil War sites.  We started at Yorktown.  Yorktown is more strongly associated with the War of Independence and so it proved to be at the National Park.  The focus was very much on Revolutionary history with just a slight nod to its place in the Civil War.  At the risk of muddying the waters of the boys’ learning for the day, we subjected them to the film about the history of Yorktown.  I write “subjected” because it had not been updated since probably the 1980s and the quality of performances and production values were pretty tragic.  I am not sure, therefore, that the boys engaged much with the film but hopefully some learning stuck and they at least took away from it that it was the place where Cornwallis surrendered.  They did, however, enjoy the various canons outside the visitor centre.  There was to be a lot of clambering on canons that day. 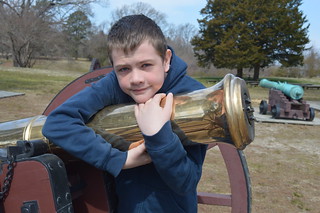 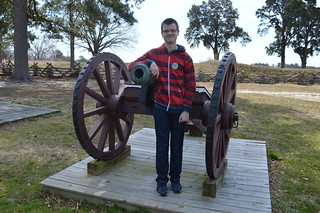 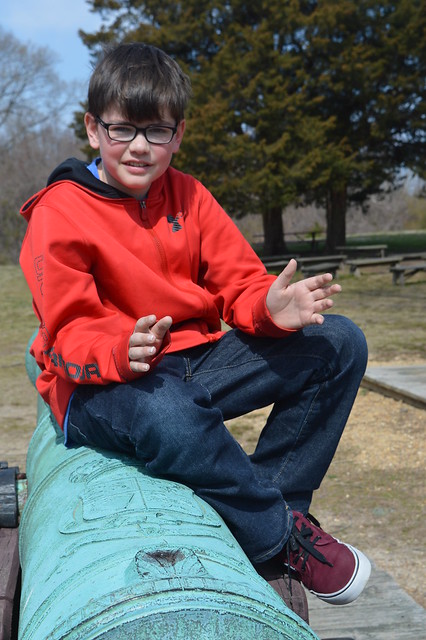 Our next stop was the Hollywood Cemetery in Richmond.  As regular readers will know, I absolutely love cemeteries.  While I personally enjoy just wandering around and appreciating the memorial architecture and funerary sculpture, it is always useful to have some famous burials to search out and provide focus to the wanderings.  Turning a cemetery visit into a “treasure hunt” also helps engage the kids.  The reason for our visit was because the cemetery, while a public cemetery rather than a military one, is chock full of confederate graves.  It, therefore, formed part of Mr Pict’s Civil War tour.  We started with a massive granite pyramid erected to commemorate the confederate dead.  It was in an area where the confederate dead of Gettysburg had been interred following their recovery from the Pennsylvania battlefield.  Can you imagine the grim task of locating all of the remains on the battlefield and preparing them for transportation to Virginia?  Nearby was the grave of George Pickett, he of Pickett’s Charge.  We also saw the grave of JEB Stuart. 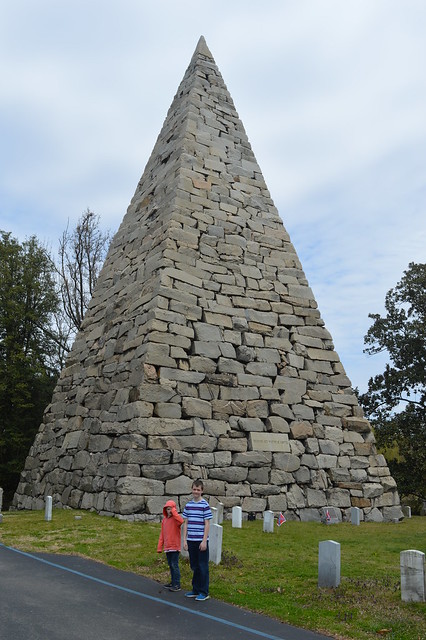 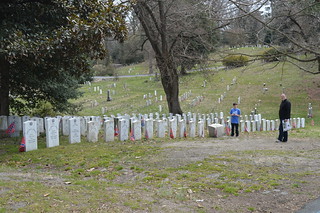 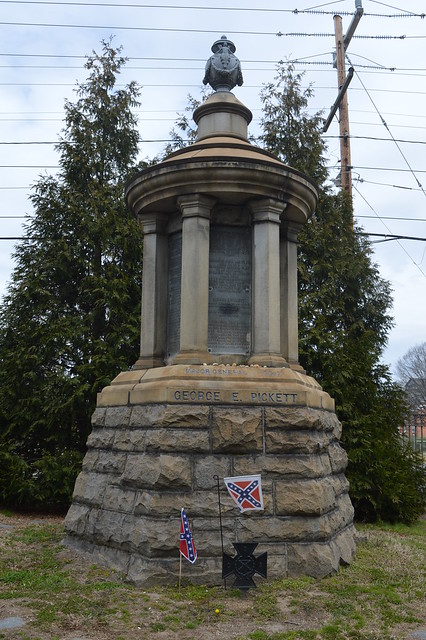 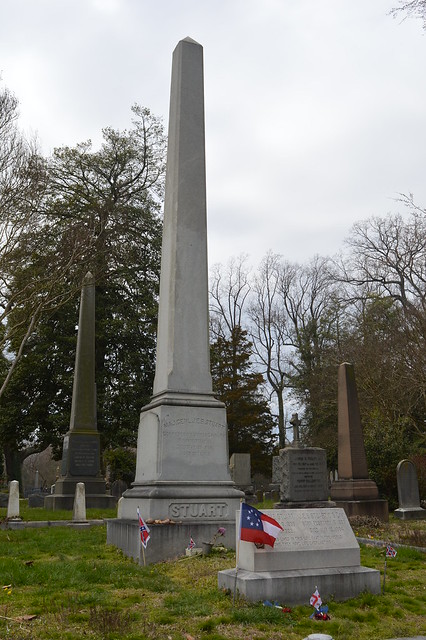 I have no political, ideological difficulty with the commemoration of the confederate dead within the context of a cemetery.  The confines of a cemetery’s walls makes it about the living processing the grief of lost loved ones.  I can think that these are people who chose to fight on the wrong side of history, who were fighting to uphold an appallingly horrific system, who may even, particularly in the case of the military leaders, have been loathome, morally bankrupt individuals.  But I can square that against them being someone’s father, someone’s son, someone’s brother, and therefore deserving of being buried with dignity and not left on a battlefield to moulder.  What I have real difficulty with is when commemoration moves into the realm of celebration.  That is why I support the removal of confederate statues from public spaces.  Again, while tricky in the context of a cemetery, there was definitely something that troubled me about the grave of Jefferson Davis.  The fact that some workers were placing new cobbles around Davis’ statue, in order to make the whole area look polished and smart, seemed to me to underscore the fact that this was a site that was being venerated.  Then there were all the flags.  Those flags always make me feel uncomfortable.  This was not simply a place where family members could come and pay their respects to a departed love one, gather their thoughts about their experience of loss; this was a space that was bigger than that and was imbued with more political meaning than that.  It was weird.  Just weird. 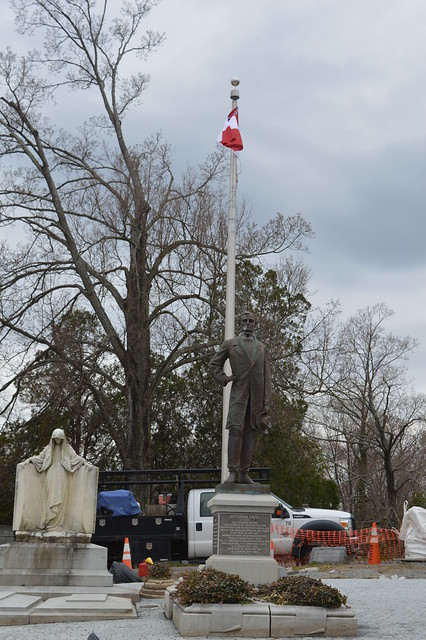 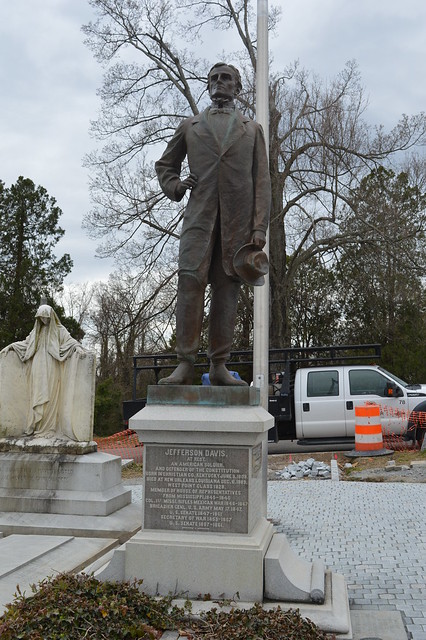 Hollywood is also the final resting place of two American Presidents.  They are buried within the same attractive circle in an area of the cemetery that is elevated and provides a striking view over the river.  James Monroe, fifth President, had a very unusual tomb, an elaborate and fancy cast iron structure, reminiscent of a gothic church, surrounding his granite coffin.  I read that it was known as the “birdcage” which is entirely apt.  Just a hop, skip, and a jump from Monroe’s grave was the monument to John Tyler, tenth President.  Tyler famously became President when William Henry Harrison died just one month into his presidency.  He also has two grandsons still living.  Imagine having a grandfather who was born in 1790?  His grave was marked by an obelisk with a bust built into its front facade. 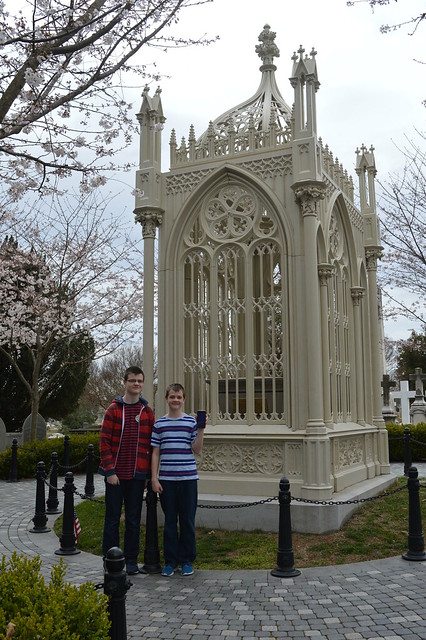 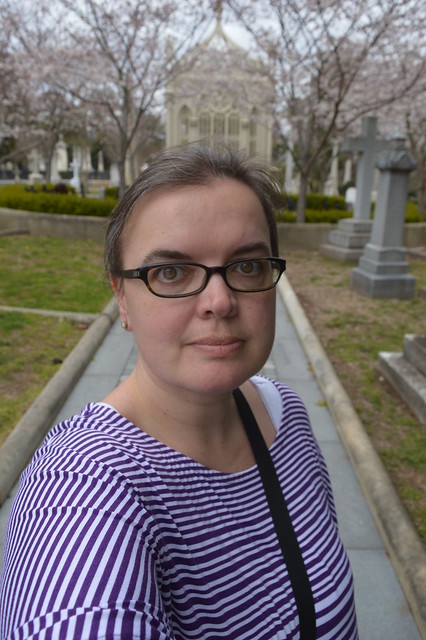 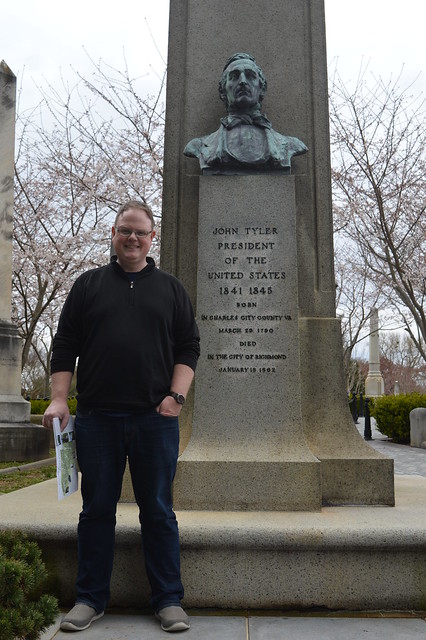 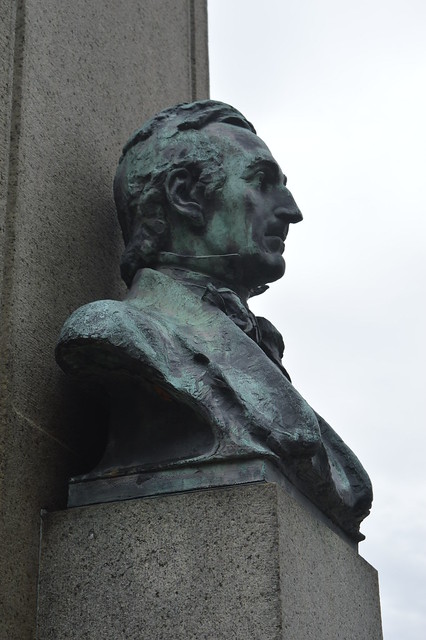 After Hollywood Cemetery, Mr Pict took us to visit battlefield after battlefield.  The first was Gaines Mill and it was only slightly more interesting than the sites that followed because of the presence of a house.  Mr Pict and his father were very interested in a creek that ran through some woods that flanked the fields and went off for a wander there but to my mind the site was pretty featureless except for that house.  I read that the house was home to an elderly widow whose slaves carried her out of the house on the day of the battle.  She was never able to return home because the house was all but destroyed during the conflict.  I think the next stop was named Glendale Crossroad or Frayer’s Farm but I didn’t even bother to get out of the car for that stop and cannot remember what my husband told me about it.  As far as I was concerned, it was literally a crossroad and there was nothing to see.  The last stop was at a spot named Malvern Mill.  Mr Pict was very keen on this spot and explained why but I did not absorb the information.  To me, these were literally just fields filled with scrub or the stubble of old crops.  The only thing that indicated it was a place of historic significance was the presence of canons lining the field.  The boys enjoyed clambering on the canon and seeing a whole car lot filled with fire trucks as firefighters were running a controlled fire nearby. 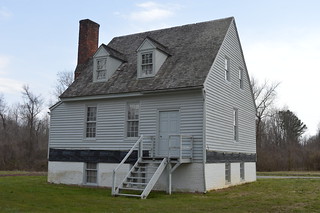 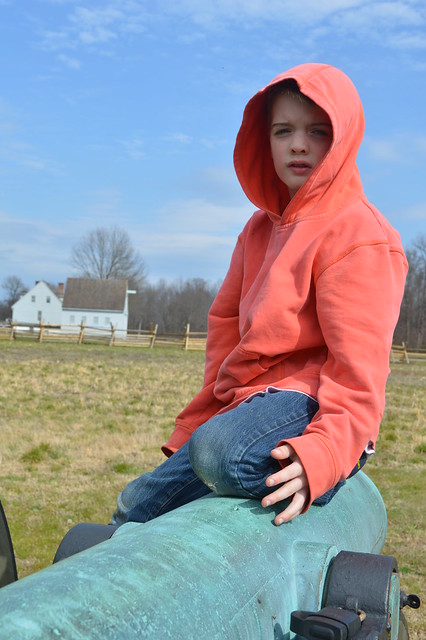 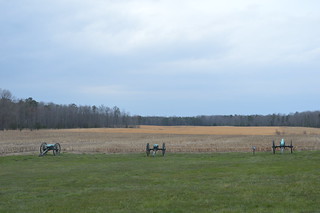 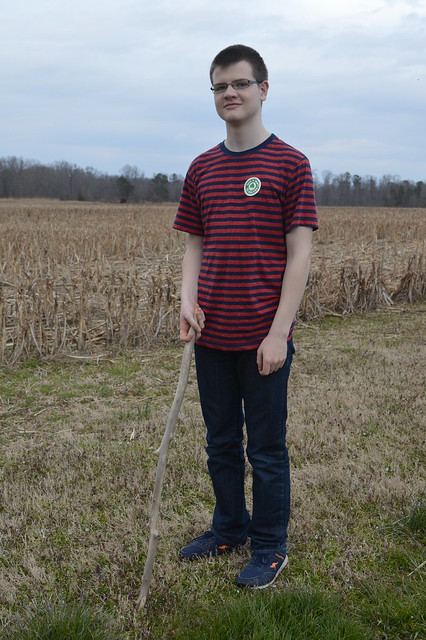 I would like to claim that I learned something new or interesting about the Civil War that day but honestly I did not.  I am none the wiser about the Peninsula Campaign than I was before because I just could not absorb the information my husband was sharing with us.  My brain just is not that keen on military history, what can I say.  Still, the cemetery was attractive and Mr Pict was very happy so it was a day well spent. 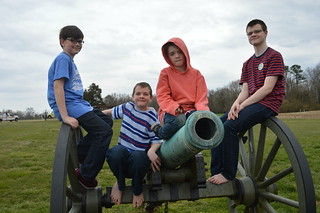