I have been in a bit of a mixed media doldrums in recent weeks.  I feel as if I have been going backwards rather than forwards with my skills, making messes rather than progress.  Granted I have had two weeks of having a different kid home sick from school following on from a week of having no heating in the house, I have been juggling a lot, my free time has been squeezed and choked, my creative mojo has been wilting, but I feel as if my mixed media abilities have atrophied or at best plateaued.  This week’s Life Book lesson, therefore, was a test of whether I could get things heading in the right direction again.

This week’s lesson was taken by Tamara Laporte which was a good start since Tam is always upbeat and sunshiney and positive with a “can do” attitude.  I also find that I can better mesh my own style with her lessons than with some other tutors.  The learning focus of the lesson was creating a darker skin tone for a winged figure.  There was a second learning opportunity which was using molding paste to create texture but, since I do not own molding paste, I did not do that part of the lesson.

The things I like about my painting are the peacock feather, jewel colours; the way the green eyes pop; and the way the tilted head makes the figure look as if she is daydreaming.  While it may not represent great progress with mixed media, I at least feel as though this is a step forward rather than backwards.  Let’s hope I keep moving in that direction. 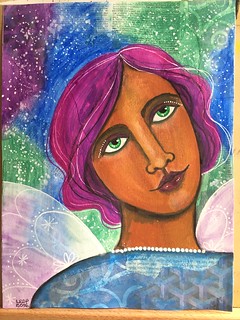