School was closed for two days this week for Rosh Hashanah so my kids were home and we could crack on with our History of Art project.  It has had to extend beyond the summer break but hopefully we can get it finished up before Thanksgiving.  I ran a project on the 50 states of America a few years ago that was supposed to last the summer but which went on for months.  Clearly I have a tendency to over-plan learning activities with my kids.

MC Escher was the subject of our next lesson.  The boys really enjoyed looking at Escher’s art work.  They oooohed and aaaahed over how clever each piece was and marveled at the skill of the composition.  It would have been just shy of impossible to teach the kids how to create an optical illusion type piece – especially given that I could never accomplish such a feat – so we chose to focus instead on Escher’s use of tessellation.  We looked at several examples and different types of tessellation – rows of tiles, flipped and rotated – and I demonstrated a simple way to construct a tile through removal and addition of elements from a geometric shape.  It was a little too close to a Math lesson for some tastes.  My 9 year old opted out.

Can you guess what my oldest tessellated?  Yup, rows of rainbow coloured penguins. 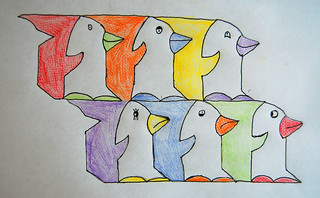 My 8 year old came up with a shape for his tile and then decided that it looked like a robot head.  You can detect the influence of Baymax from ‘Big Hero 6’ in the way he has drawn the eyes. 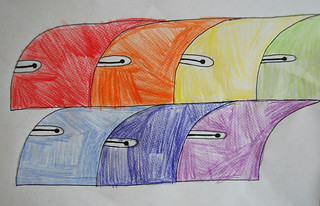 My 6 year old created an arrow tile but, once he had lined them up on his page, he decided they looked like a shoal of fish so he turned them into striped fish. 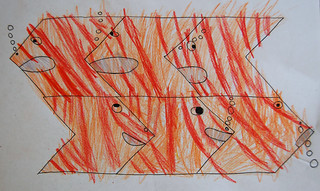 I liked the shoals of fish idea too so I constructed a fish tile and used it in my art journal, using watercolour to colour them in. 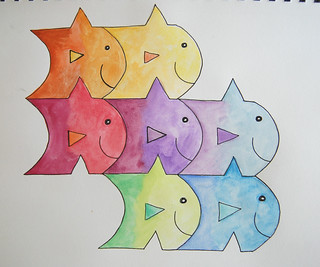 My pack of Escher bunnies is over at my other blog.

I am now all caught up with the Documented Life Project’s challenges.  This week’s prompt (and how are we 36 weeks into the year already?) was simply Black and White.  I appreciated that it was a completely open subject because it enabled me to take a more minimalist approach and catch up.  I also often work in monochrome so the challenge was well within my comfort zone.

Immersed as I am in Greek Mythology at the moment, due to my Drawing a Day challenge, I somehow landed on the idea of drawing Danae with baby Perseus, set adrift in a wooden chest by Acrisius.  I am fond of doodling and a doodle approach was perfect for this drawing because I could fill in a section or two and then put my pen down to go attend to something else and then return and doodle in a bit more.  I, therefore, have no idea how long the drawing took me as I was doing it in bursts of a couple of minutes throughout yesterday afternoon.  It is quite meditative to focus on creating pattern within shapes so I also had doses of decompression from the stress of dealing with boxes and finding new homes for stuff – such a lot of stuff – in our new house and struggling emotionally with a difficult anniversary.  Interestingly, when I showed it to my kids, the youngest two did not see it as being Danae but instead interpreted it was representing me and their baby brother who was stillborn six years ago today.  Perhaps sub-consciously that was what prompted me to pluck this subject matter from the ether.  Drawing can definitely be therapeutic.  My husband commented that he thinks this is the best of my Art Journal pages.  He even used the word “stunning”.  He’s biased, of course, but I will still take the praise. 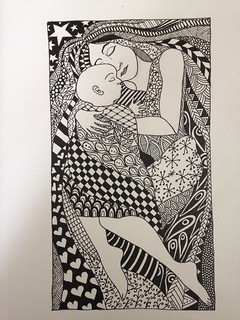