There were two lessons on Life Book this week.  I must confess that neither lesson grabbed me immediately or felt naturally like “me” and – in a week when I am up to my eyeballs with commitments and have a slammed schedule – I admit that I was tempted to skip the lessons, maybe come back to them at a later date.  However, I am striving to meet all my art deadlines and so far am succeeding (a little high five that was popped into my Jar of Awesome) plus a bit of creative time in a hectic week is a useful balm for stress so I decided to plunge on in and see what came of it.

The first lesson was taken by Jill K Berry and the object was to create my “heart community”.  The lesson was very reminiscent of making paper dolls or chains of people.  The instruction was to make representations of the four people who most influence me, with little doors on each figure, so that they folded up into a concertina book.  With four little figures, I had to make my four boys.  They definitely inspire me every day in many ways so they fitted the brief too.  The blocky shape of the figures that emerged from the cut paper automatically made me think of Lego minifigures.  Perfect!  Three of my kids (and I) are obsessed with Lego so that seemed completely apt.  I used a mixture of painting and collage to construct my little lego sons, doing so in stages over the course of 24 hours, whenever I had free time.  I wrote adjectives that describe each of their personalities inside the doors in each of their torsos and each of those doors has something on the front that represents each of their favourite things.

The second lesson was taken by Violette Clark and the theme was “magical mystery tour”.  The idea was to produce a painting, with collage elements, that depicted a magical, creative, somewhat whimsical house.  That house was supposed to be placed on a painting of the top of a head, as if the house was springing forth from the creative imagination or perhaps even representing the creative mind, but I decided to abandon that element mostly because of time management but also because that aspect did not really speak to me.

I modelled my house on a drawing I did in my art journal last year because I liked the quirky shapes and wonkiness of the building I drew.  I used acrylic paint to create a sunset background because I love the warm colours of a wonderful sunset.  The fluffy cloud shapes were painted with pink pearlescent paint so, although you cannot see it in the photo, the top of each cloud shimmers.  I collaged a green hill to replace where the top of the head should have been.  Then it was just a case of using gelli plate prints to construct the shape of the house.  I was supposed to leave one side of the roof unglued so that little slips of paper could be inserted into it like an envelope but I got carried away and glued it down.  I realised right away so I could have found a way to leave a side open but I decided I was not that keen on the idea of using it as an envelope so I chose to let it be.  I used washi tape to create a front door and roof flashing and used postage stamps for windows.  I stamped the whale on in order to create a weathervane because I really want a whale weathervane in real life and still do not have one – except on my magical house.  The final touch were the little love hearts emerging from the chimney pot. 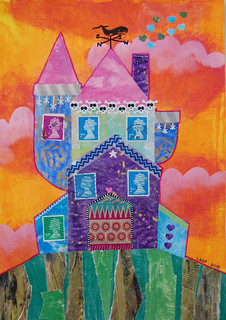