In my previous post, I explained that I find it difficult to concentrate on my art while also socializing. While one of my solutions is to draw a familiar subject, another is to just doodle around and see what happens without really thinking about it. This monstrosity testifies to the peril of taking that approach. Yikes. This was actually created on the same day as the Bride of Frankenstein from yesterday’s post. The opposite page was covered in gesso leftover from other projects that I had scraped on with an old gift card. The one positive quality to this page is that it has a really interesting texture. As with the Bride, all I had with me were my portable supplies so I grabbed some Inktense pencils and set to scribbling something out. I imagine I must have started out drawing an owl and honestly goodness knows what happens because the result is truly terrible. I spattered some white paint on it after I got home as if that was going to rescue it. What was I thinking? Even if I was thinking anything back then – which I doubt – I certainly cannot remember now that years have passed. At least I am proving my integrity by continuing with my commitment to share the good, bad, and ugly of my art experiments. Judder.

I was not really in the mood for art when I sat down at my art table but I am trying to get myself back into the habit of making regular time for creativity so I pushed myself. I decided to do something quick, simple, and whimsical. Since the windows adjacent to my art table provide me with a good view of the birds in my garden, that inspired me to draw a very simplified bird. Because I was in the purple section of my Rainbow Art Journal, I had thought I was going to draw a chubby hummingbird. However, what I ended up drawing was an owl. I kept this page very simple – just three colours of acrylic and two paint pens. The illustration itself is blah but I do like the colour palette. Most importantly, however, I pushed myself to spend time on art as an effort to build back those art habits and my ability to get something accomplished in small portion of time. And, with that, I am done with the purple section of this art journal. Maybe I can actually get this journal project completed this year.

Last week’s Colour Me Positive prompt was on the theme of Courage.  While the theme and the supporting quotation failed to spark any creativity in me, the optional prompt to incorporate a boat did.  For some reason, an echo from childhood reading and singing perhaps, the first thing that popped into my head was Edward Lear’s poem ‘The Owl and the Pussycat’.  I drew around a side plate in pencil to provide me with a circular frame and then I drew the characters and their pea green boat in ink in a fountain pen.  I used watercolour pencils to add colour.  Simple. 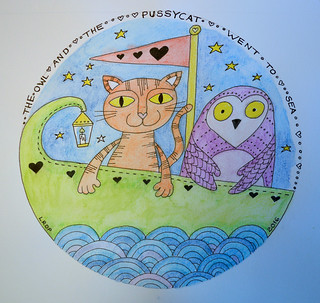 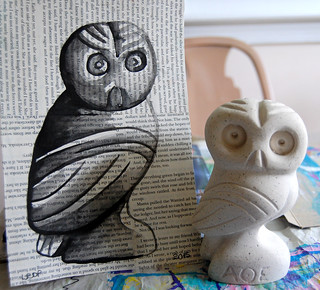 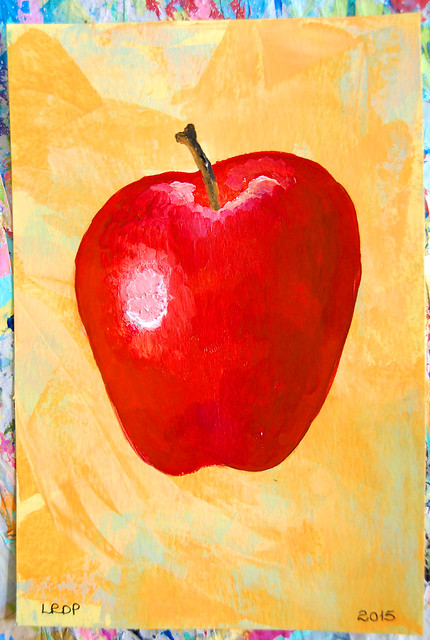 Athena (or Minerva, as the Romans called her) is, of course, the goddess of wisdom.  She is, however, also the goddess of several other things including justice, courage, mathematics and arts and crafts.  That’s quite a diverse portfolio.  As much as she represented morality and wisdom, justice and creativity, however, she could also be a butt-kicking warrior woman, getting involved in battles – such as the Trojan War – and even fomenting conflict by promoting one side over the other through her patronage and magical gifts.  She did prefer, however, that arguments be settled through reasonable discourse rather than through violence.  That’s the wisdom.  Her father, Zeus, could have learned a thing or two from her.

Athena is one of those mythological characters who has a completely bonkers birth story.  Zeus, as he was wont to do, had his wicked way with Metis.  Then he recalled a prophecy that Metis would give birth to children more powerful than their father and regretted his impulsive rutting.  His solution was possibly learned from his own father, Cronos, in that the response was to swallow Metis whole.  She, however, had already conceived.  Zeus began to suffer a terrible headache and one of his children (sources are apparently inconsistent on which) decided that the best medicine was an axe through the skull.  From this wound leapt Athena, already an armour-wearing adult.  It’s a more dramatic story than being delivered by a stork, I suppose.

For all her judgement and wisdom, Athena could be petulant and cruel.  When Medusa was raped by Poseidon in the temple dedicated to Athena, the goddess punished Medusa for the desecration by turning her from a beauty to a hideous monster whose gaze turned people to stone.  In another myth, the Judgement of Paris, there is a contest revolving around a golden apple in which Paris has to decide which of the goddesses, Hera, Aphrodite and Athena, is the most beautiful.  When he chose Aphrodite (because of a bribe), Hera and Athena were so insulted and enraged that they precipitated the Trojan War just to antagonise Paris.

In my drawing of Athena, I have adopted a couple of traditional elements that are signifiers of her identity.  One is the helmet, appropriate since she was born in full armour.  Thankfully my silver ink behaved better than my gold ink so that I could give her helmet and also her fibula a metallic finish.  Athena is also associated with the owl, her sacred bird and mascot.  As is traditional in statues of the goddess, I chose to draw the owl perched on her shoulder.  I would be curious to learn which was associated with wisdom first, Athena or the owl, and whether the association led the wisdom of one to be connected to the other.  Anyone know?