This weekend we found some time to continue with our History of Art project which is finally nearing its conclusion – thankfully, given I had only intended for it to be a summer project.  Next up was Georgia O’Keeffe – a female artist at last!

We looked at her flower paintings and discussed their focus on colour and shape, the fluid lines, the idea of focusing on tiny details and transforming them into huge images.  The boys are not ready for Freudian interpretations so we didn’t touch that topic.  We also looked at her desert landscapes, her recreation of the colours of the geology of the region, the quality of light, the desert plants and the bleached skulls of animals.  That led to a brief conversation about painting both life and death.

It was inevitable that the boys would all plump for drawing skulls as soon as they saw O’Keeffe’s paintings of animal skulls in the desert.  There I was talking to them about using large brushes for painting flowers and mixing the sort of colours O’Keeffe used for her flower paintings and all the while I probably knew the boys were just thinking, “Bring on the skulls, mother!”  If we ever stumbled across a skeleton when out on a woodland walk we would react as if we had just found treasure.  Impromptu lessons on animal biology and adaptations would take place but so would a lot of poking with sticks.  Confession: we have a roe deer and a badger skull on a shelf in our basement.  So, yes, the drawing of skulls was inevitable.

My 6 year old immediately scurried off to the basement to grab the deer skull.  It was a great opportunity for me to teach him about observational skills and drawing while looking and the use of contour lines to build up a drawing.  I think he did a wonderful job. 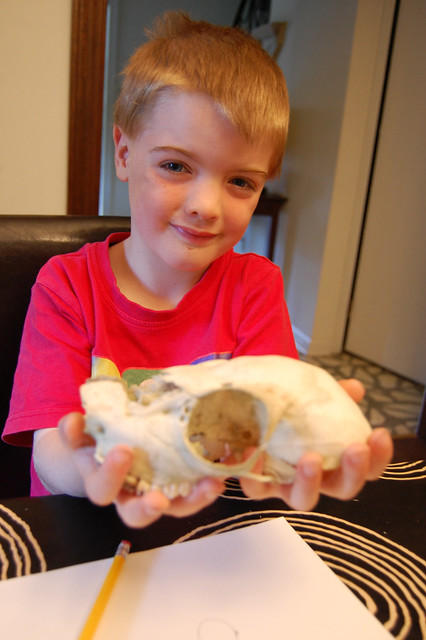 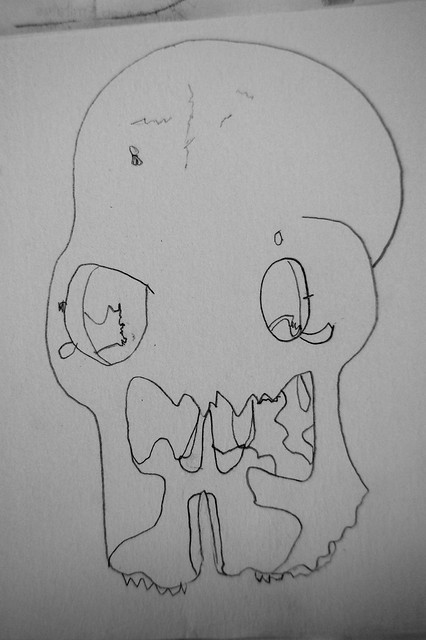 My 10 year old drew a skull, part of a spine and arm bones forming part of a desert landscape.  He had intended to colour it in but then decided to go and play on the PS3 instead.  There is something about his drawing that makes me think of the skeletised dragon in the desert of Tatooine in ‘Star Wars’. 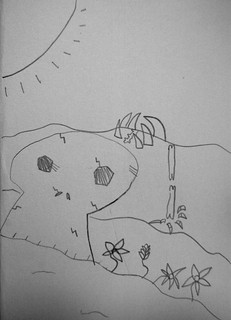 My 12 year old, in keeping with his determination that every drawing has to be either Minecraft or penguin inspired, decided to draw a penguin skull.  He googled to find a photo of a penguin skull and drew from that.  He then added a little penguin angel floating in the sky, a happy sun, and a smiling narwhal.  A pretty peculiar wake. 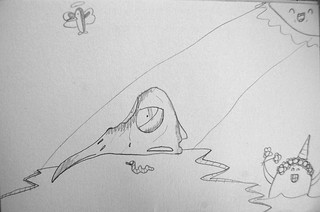 My 8 year old has a minor obsession with raccoons so he decided that the subject of his drawing would be a raccoon skull.  We don’t own one of those so he pulled a photo of one up on my phone and then set about drawing.  I think his drawing of the skull has incredible detail in it and I am very impressed with it.  He plays electric guitar and had been listening to Guns ‘n’ Roses for inspiration so the motif from that band also found its way into his drawing. 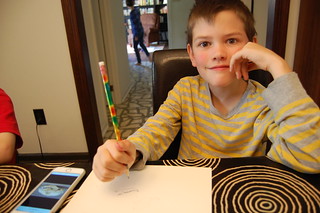 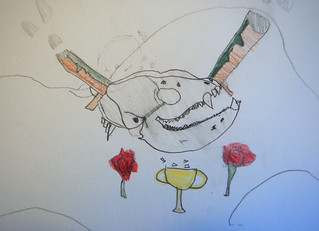 I too succumbed to the lure of the skull.  When I was in High School, my art teacher had shelves filled with interesting objects we could draw or take inspiration from and among the items were several skulls.  I used to draw them quite often – but not as often as I drew his collection of battered old leather footwear.  My skull drawing skills are pretty rusty.  I started, however, with a floral doodle in watercolour.  It is the same flower doodle I have been drawing for almost my entire life.  I then did the same as my 8 year old and brought up a photo of a skull on my phone but I challenged myself to draw in India ink, with no pencil under drawing, so that I had to work with any errors or flaws, no erasing possible.  That explains the lack of symmetry.  The horns are ridiculously imbalanced.  I am quite happy with the quality of the drawing, however. 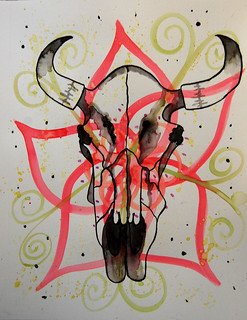 The dual prompts for the Documented Life Project this week were Colour Wheel and a quotation from Georgia O’Keeffe: “I found I could say things with colour and shapes that I couldn’t say any other way”.  When prompts lean towards the broad and vague, it can be hard to know where to start.  There are so many options and possibilities that it becomes hard to narrow the focus to one idea and thus inspiration is in short supply.  The beauty of such open-ended prompts, however, is that every member of the group is bound to have their own unique take on the prompt(s) and put their own individual spin on it.  Once inspiration comes knocking, each person is free to run with it and see what emerges on the blank page.

Recently it has rarely been the case that I have created my prompt response so early in the week.  Finding time is my major artistic challenge right now.  Today, however, I happened to have my monthly Art Journal MeetUp group so I was presented with a wonderful opportunity to get the page done.  We meet at a coffee shop so travel art supplies to hand and hot chocolate to mouth (because I don’t drink coffee) I set about creating my page.

My 7 year old and I have been cutting out shapes to use in our art journaling.  The O’Keeffe quotation inspired me to include a repeated shape on the page and one of the shapes I have is a matryoshka doll.  Each matryoshka doll could, therefore, represent a different wedge on the colour wheel.  I used watercolour, pencil and pen to create my spectrum of matryoshka.  This is actually the second time I have created a journal page based around matryoshka.  I don’t know why I am so drawn to that shape or idea.  Answers on a postcard.

Although I had plenty of negative space on my page, I did not have a great deal of free space.  I, therefore, focused the O’Keeffe quotation down to the most relevant part and used pen to add it to the bottom of my page. 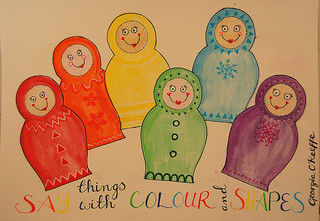