We decided that for once we would permit ourselves to sleep past 6am and would chill out in the morning so that we could extend ourselves at the other end of the day.  Our first stop of the day, therefore, was for lunch in a town named Panguitch.  Our youngest son selected the diner on the basis that it advertised its “homemade pies” – though we ended up not eating any.  The diner was pleasant – rough wood, chalkboard walls, booths separated by corrugated metal sheets, rustic in a fresh way – but the food turned out to be only middling and the service was lacking.  It did, however, give me the opportunity to learn a bit more about Panguitch.  Butch Cassidy apparently grew up nearby but more fascinating was the story of the Quilt Walk.  The Mormon settlers found themselves lacking food to see them through a hard winter (they can get snow on the 4th of July there) so dispatched a group of menfolk to go and fetch some food from another town.  When the oxen could not get any further on the journey, the men took to their feet and found the only way they could proceed was by placing a quilt on the ground, walking over it, placing another on the snow, walking over it, ad nauseum until they reached their destination.  Incredibly, they made it back to town with food and saved the day.

Fuelled for the day, we headed along the road towards our next National Park: Bryce Canyon.  We travelled on “scenic byway 12”, an “All-American Road”.  I can testify that it was indeed a very scenic route as it took us past blazing red rocks and the Dixie National Forest.  We did not arrive at Bryce Canyon until almost 3pm and we stopped in to the Visitor Centre to get our passport stamped, use the restrooms, and acquaint ourselves with what we would be seeing.  We watched a short documentary about the park in a room filled with stuffed animals and the younger boys enjoyed playing in an area that was set up to be a giant prairie dog burrow.  We topped up with water and then we set off for our first hike. 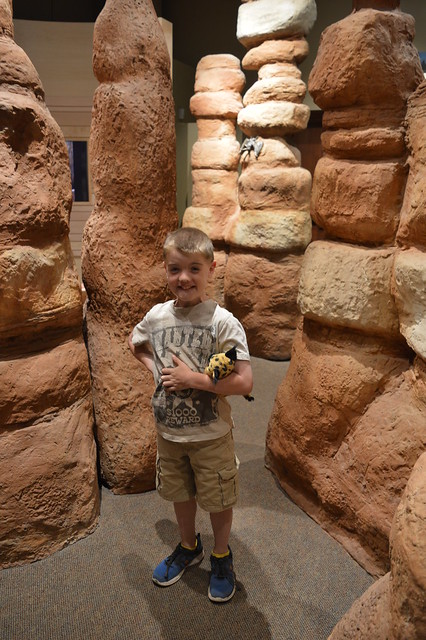 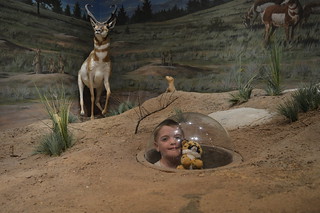 We decided we would hike the Queen’s Garden Trail as it was supposed to be pretty accessible and showcased a lot of hoodoos.  Hoodoos are what Bryce Canyon is probably most famous for.  To the best of my (limited) understanding, they are tall columns of mixed hard and soft rock formed by the gradual erosion of the softer rock.  The hoodoos at Bryce were eroded through cycles of freezing and thawing.  Between the intense colour of the rocks and all the weird hoodoos, it really is a strikingly weird and utterly fascinating landscape.  I have seen the interesting rock formations in Monument Valley but the geology at Bryce Canyon was something else entirely. 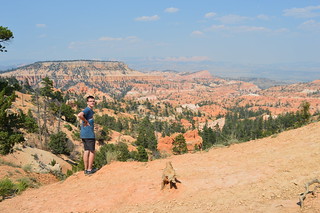 We headed down the trail and were soon surrounded by this alien landscape.  The advantage of having left it late in the day to undertake a hike was that it was no longer baking hot and also the sun had that late afternoon golden quality to it that really brought out the shades and tones of the rock.  Going down was easy enough as the gradient wasn’t too hard going.  We still took frequent breaks but they were in order to take in the view, take photographs (I took hundreds), and befriend the odd ground squirrel.  Our 10 year old told us the Paiute story of how trickster coyote turned people into hoodoos as punishment for reckless greed which entertained us on our trek. 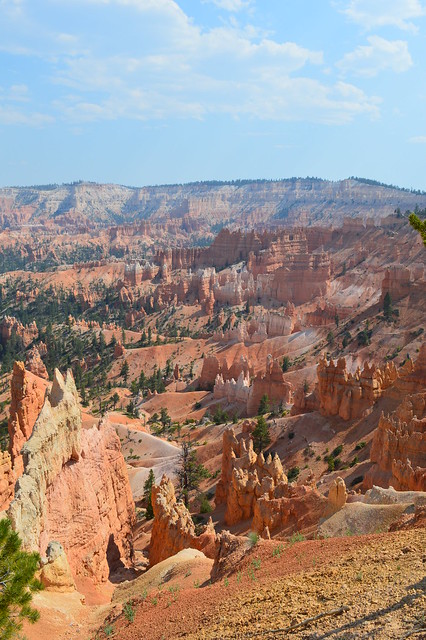 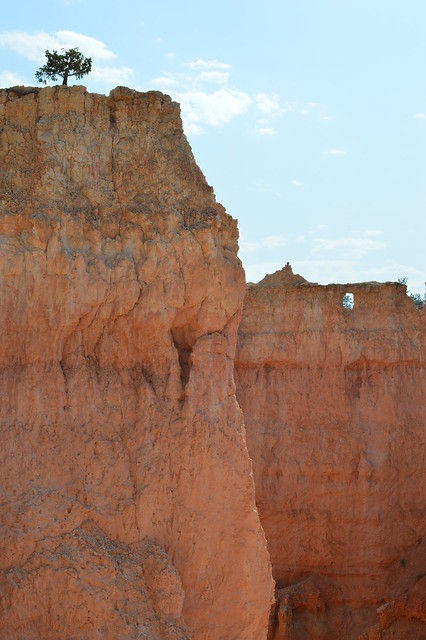 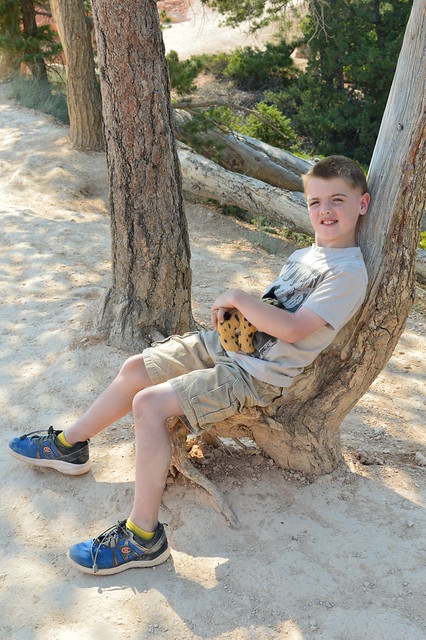 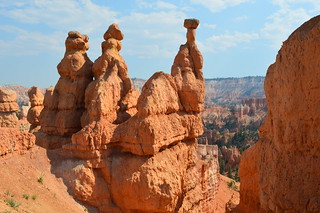 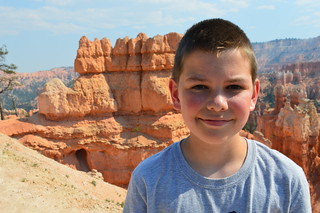 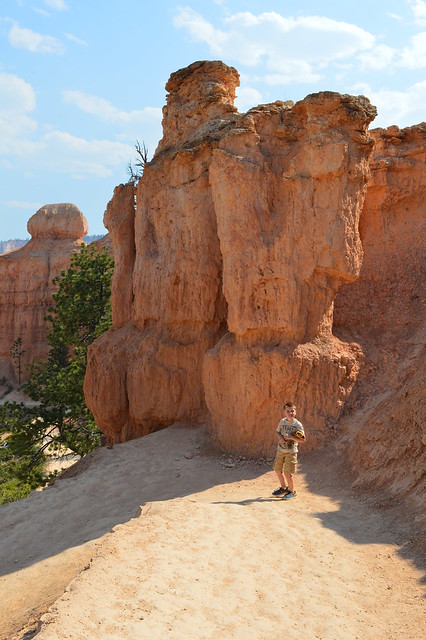 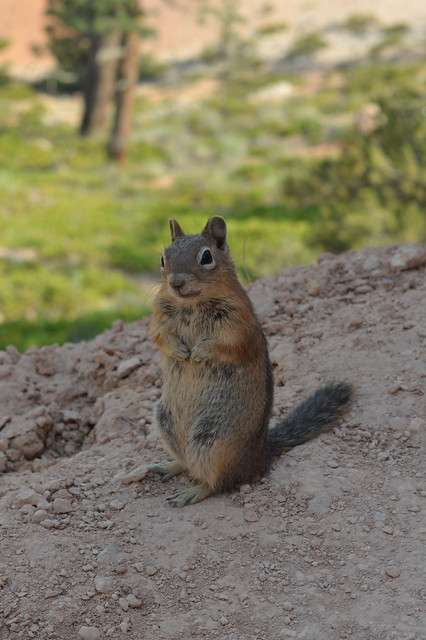 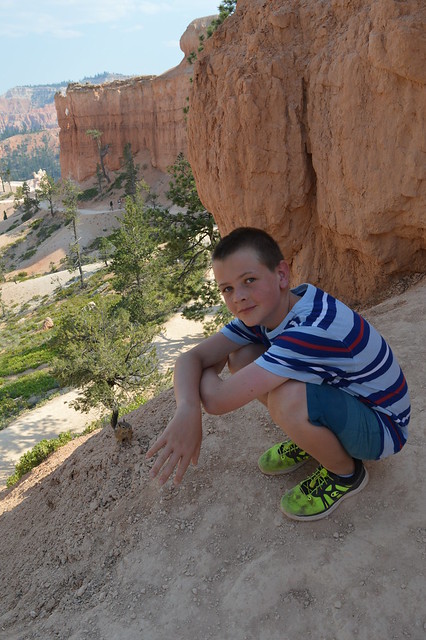 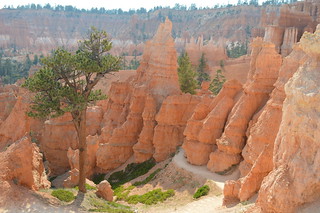 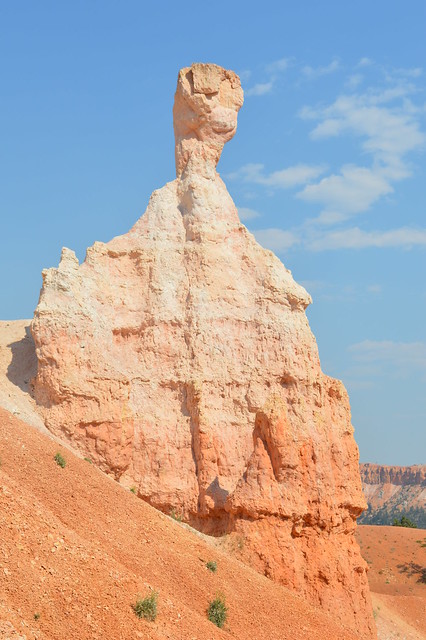 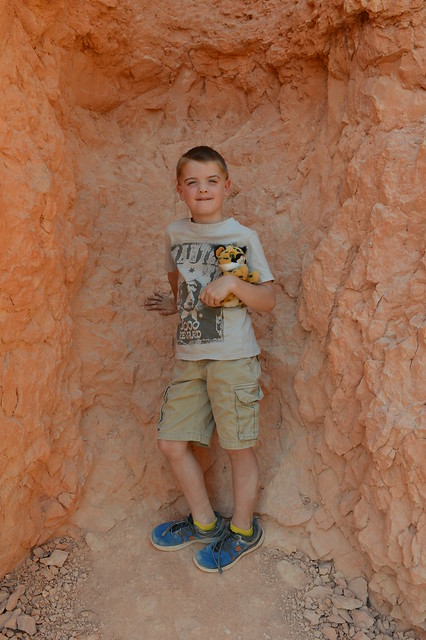 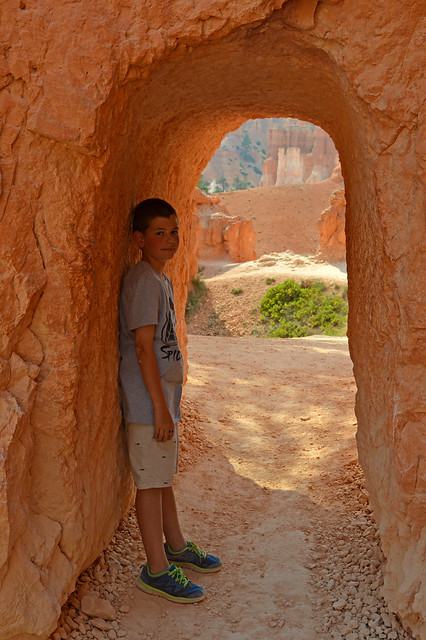 Queen’s Garden is so called because there is allegedly a hoodoo that looks like Queen Victoria.  It took a great deal of imagination to see what once have been Britain’s dumpy Queen in the rock formation that greeted us.  Perhaps she had been eroded a bit since the likeness was first claimed.  We walked a little further on and considered doing a bit of the Navajo Trail but, in all honesty, I think that was more because moving forward would postpone ascending back out of the canyon.  But time was of the essence and we knew where we wanted to be at sunset and what we wanted to do before then so we decided to retrace our steps and climb back up to the rim.  Going down was easy but getting back out was much less so.  I could feel the gradient in my knees plus there were no new vistas to distract me.  I was distracted by some beautiful Steller’s Jays who were swooping between trees, their blue feathers glimmering in the light, but by the time I got back to the starting point of the trail, I decided I had had enough of climbing out of canyons for one vacation. 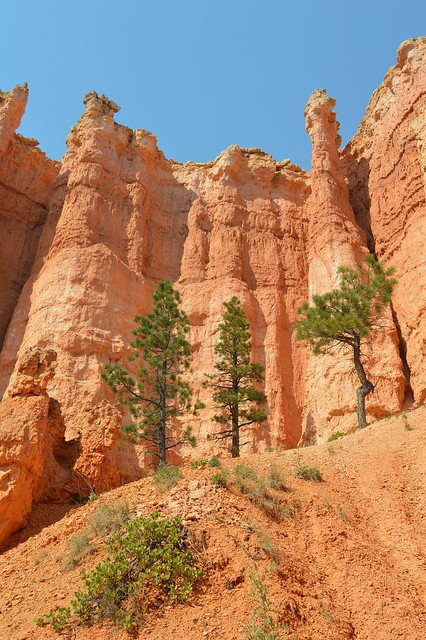 We hopped back in the car and drove to the furthest point of the park – or at least the furthest point we could reach by car.  The route to Rainbow Point took us along the narrow crest of a ridge.  It was actually a little terrifying, truth be told.  I was glad to get out of the car when we reached Rainbow Point, even if it meant I was just staring at more heights.  There are lots of colour-themed spots in this area of the park (pink, vermilion, grey and chocolate cliffs) plus a site known as Molly’s Nipple.  I am not sure I successfully identified any of the locations but the rocks were definitely interesting for the variety of colour.  It was a pretty majestic scene spoiled only by the fact that one young couple had decided to pose for selfies while balanced precariously on the barrier above the cliffs.  They were giving me palpitations.  We drove the ridge again and stopped off at Natural Bridge.  This is a visually striking natural arch but what my kids liked most about our stop off there was that they were able to interact with a particularly bold raven.  We had been seeing ravens all over the park but, unlike the others, this one showed no inclination to fly away and instead let us get really close to it. 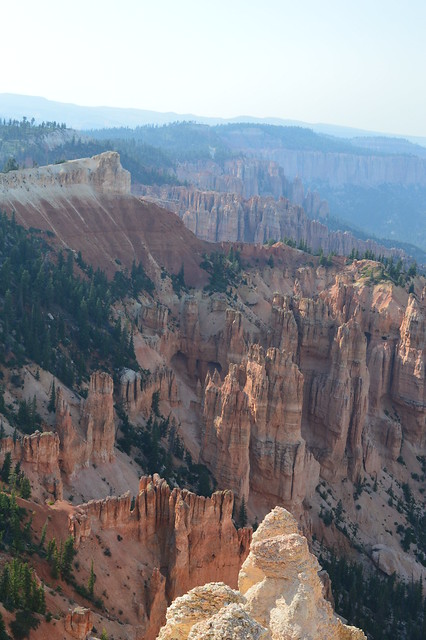 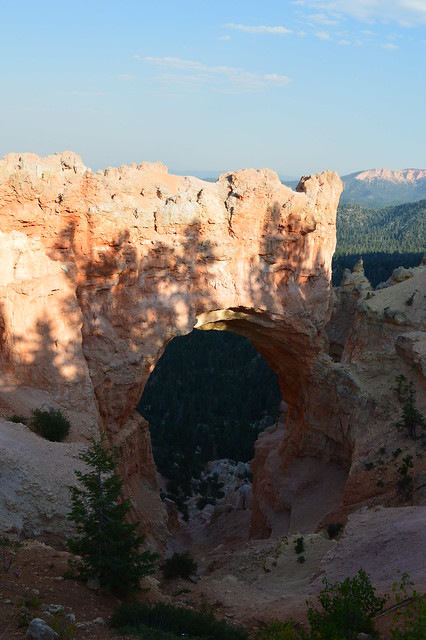 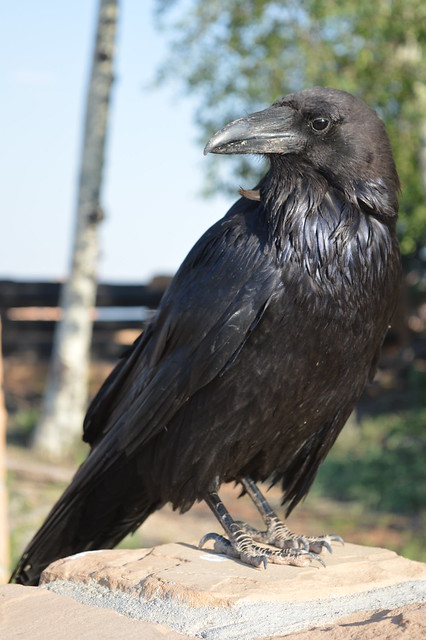 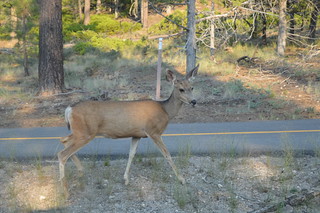 We arrived at Sunset Point just as we had planned, just before sunset.  The plan was – obviously – to watch the sun setting over this incredible landscape.  There were no vibrant hues in the sky but we patiently waited as the golden glow from the sky slipped across the rock formations until it disappeared entirely.  I enjoyed the restful calm but my kids did not have the required patience.  They instead proceeded to give me repeated Ass-Ma Attacks – the thing that happens when you make your mother hyperventilate by behaving like little asses near precipices and sheer, steep, rubbly escarpments.  In all honesty though, I did expect the sunset effect to be a little more dramatic than it was.  There actually wasn’t as great a contrast between areas of shadow and the areas still catching the fading light as I had anticipated.  However, it was still beautiful because the views were still breathtaking.  At the risk of lowering expectations for forthcoming posts, Bryce Canyon was my highlight of the entire road trip.  I had never experienced a landscape anything like it.  It was completely arresting. 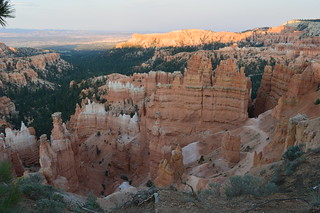 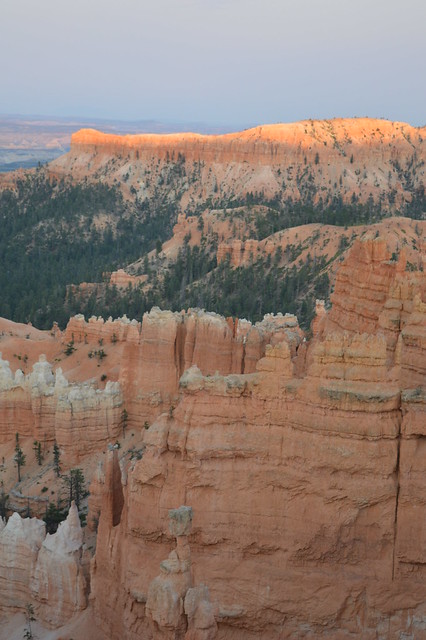 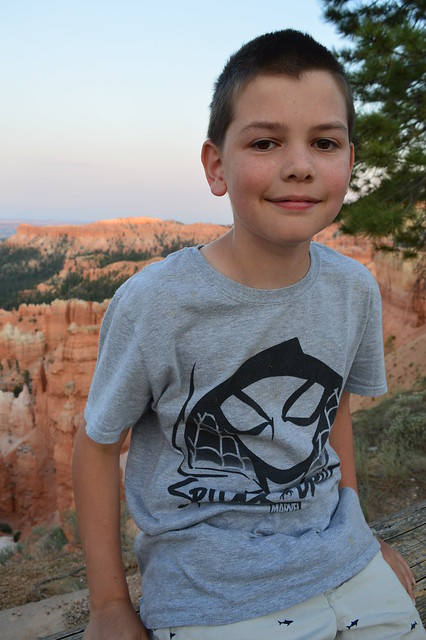 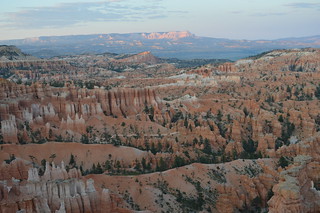 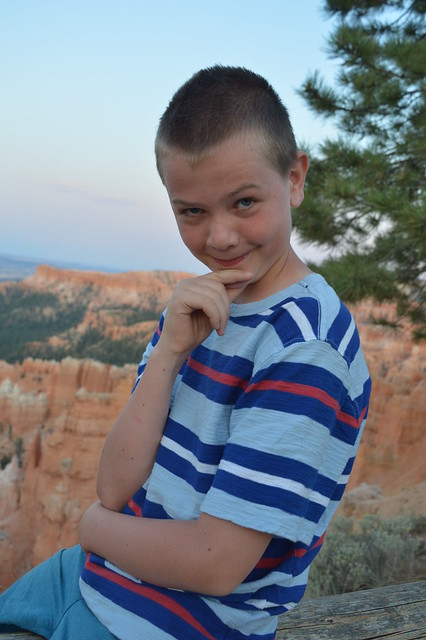