It is only the third day of Inktober and I must admit that I had to rush this drawing, cramming it in during a ten minute tea break.  Thankfully the small scale of the drawing paper and the fact I am using a fountain pen makes this much easier to accomplish.  I was not inspired by today’s official Inktober prompt so instead I am using the Drawlloween prompt.  Thank you to Sam of the Mechanical Pen blog for making me aware of Drawlloween.  I can see me using many if not all of these prompts since I am such a fan of monsters and horror movies.  Today is apparently Mummy Monday so I drew a quick mummy holding a birthday cake in reference to today also being my second son’s 11th birthday. 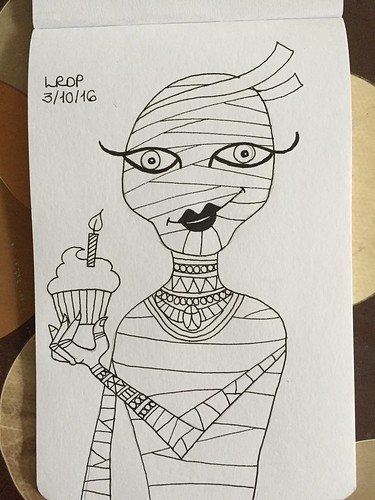 Then I had an idea.

It has been a while since my kids had collaborated with me as part of the DLP.  They have worked with me on two previous pages: one where they started the drawing and then I completed it and one where I had to incorporate a pocket.  I decided, therefore, that the surest way of me becoming inspired was to work with my boys on the prompt.  We decided upon a Halloween theme since we just celebrated Halloween on Friday.  And school photos.  We just received the kids’ school photos.  They were not great and honestly I probably would have asked for retakes had it not been for the fact that we got drenched in a rainstorm on the walk home from school on the day they were issued with led to the photos being in less than pristine condition and, therefore, unreturnable.  Monstrous school photos of cute monsters.  That was my idea.

I drew four little kid monsters, from the classic movie monster range, as if they were having their photos taken.  I drew a vampire, a werewolf, a mummy and a lagoon creature.  I used watercolour and ink to colour and outline.  Then came the tab element and my children’s input.  I cut four tabs to correspond to the four monster characters and decorated them with a line of very thin washi tape to add some colour.  I then used some arrow stamps to indicate the direction in which each tab should be lifted.  I stamped the obverse side with some sugar skulls just to add to the Halloween theme further and to make the lifted side of the tabs more decorative.  My kids’ contribution was that each was asked to draw something of their choice onto the tab that indicated who would be found beneath.  My 5 year old drew a bat for the vampire, my 7 year old drew a moon and the word “howl” using a hairy font for the werewolf, my 9 year old drew a sarcophagus for the mummy and my 11 year old drew a fish for the swamp creature.

So I went from completely uninspired to inspired by including my boys in my prompt page.

This was not the only art project I worked on this week.  I also created a lino block print of Danae which you can read about and see over at my Art Blog, Pict Ink.

I became a mother almost eleven years ago when, after an arduous 56 hour labour, my oldest son made his way into the world and transformed me into Mummy.  It was a new and much longed for identity which was made more concrete when my other sons arrived in the world, one after the other.

But here in America I am not Mummy or even Mum (because my oldest kids, at 10 and 8, are getting too old and too cool to maintain that final syllable).  Here, I am Mommy or Mom.  It’s just a switch of a single vowel yet the label feels very different.

I get that my kids are striving to fit in at school and use terminology their peers understand and, for that reason, I am not against the change in nomenclature.  It is, however, odd to discover that I feel quite strange about suddenly being Mom.  I feel certain that my children, especially the younger ones, will take to calling me Mom at home too, so that it’s not just a school and playground thing.  Gradually I just will be Mom and not Mum any longer.  It’s not just a title to describe my role; it’s a label that signifies a very important element of my identity; that is indicative of my most special, wonderful relationships ;it’s my job description; it’s who I am.  Maybe I am being overly sensitive about it because of the other things that have been happening to my identity since I relocated here but that single shift in vowel sound feels weird on me.  I’ve been a Mum for over ten years but am I ready to become a Mom?

I am definitely not opposed to it – whatever makes my kids comfortable and content is absolutely OK by me – but it’s going to take some getting used to.